As revealed by this tightly curated exhibition at New York’s Museum of Modern Art, Tarsila do Amaral, the latest artist to ride the current wave of Brazilian modernism, turns out to have invented it 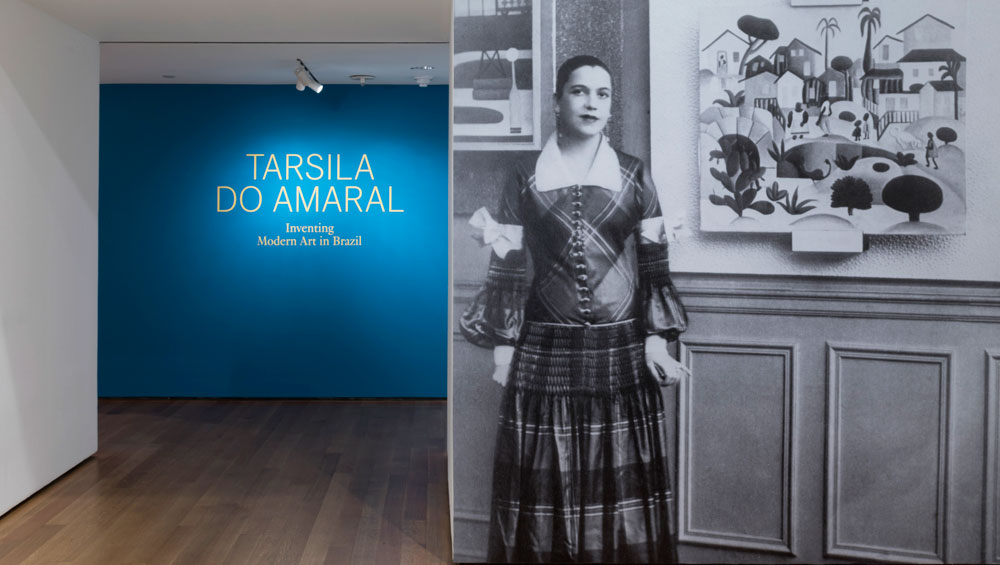 There are two ways to see this astounding small show; with either a great deal of background on this elsewhere lionised artist and her pioneering place in art history, or with no prior knowledge. Do the second first. To encounter Tarsila do Amaral (1886-1973) as a painter sui generis is to enter a world of visual delights. Fresh colours, flat planes and rudimentary forms fill canvases large and small with tales that precede metaphor. Amaral’s mission statement, “I want to be the painter of my country”, gives us the genesis of mountain, the essence of tree. A sun throbs, papaya engorge, clouds dilate, invented animals prowl – ravishing, startling, frozen in time and, for one innocent second, new. And then, not. 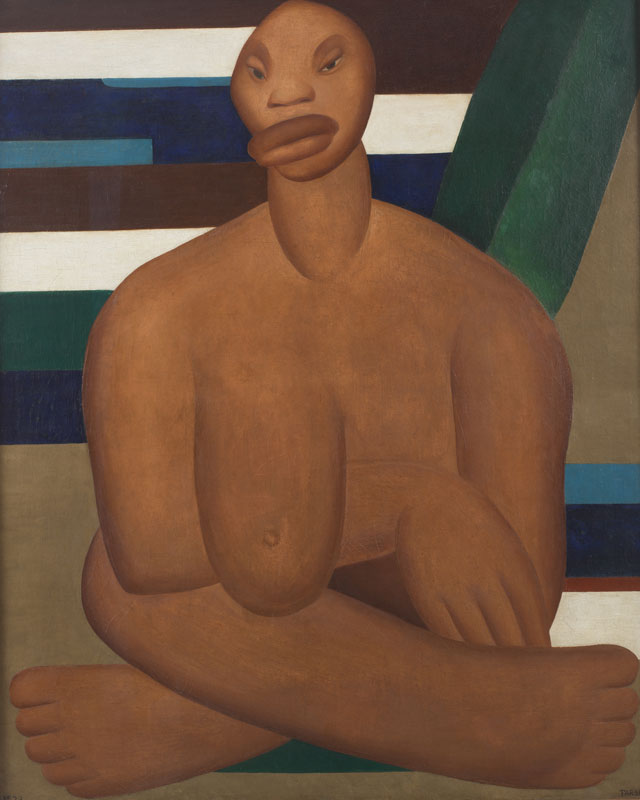 Circle a second time and visual cross-references float through the membrane of memory. Does the geometry of smokestacks (A Gare, 1925) borrow from Léger? The sexualised amplitude of A Negra (1923) from Gauguin? The surrealist Lonely Figure (1930) from Max Ernst? Don’t those elements floated in Feuilles de Route (1924) riff on Paul Klee? Surely, those limb-wrapped nudes nod to Picasso; that suggestively ripening vegetation to Georgia O’Keeffe; those lush banana leaves to Henri Rousseau? Not so fast.

Do some reading and return. You know now that Amaral was born just outside São Paulo, a child of privilege and culture raised on a coffee plantation. Seeking a wider horizon, in 1920 she moved to heyday Paris to immerse herself in international art at the Académie Julian and party in a dress by Paul Poiret with a fast crowd of starving artists and rich bohemians. For two heady years, she studied with Albert Gleizes and André Lhote, cherry-picking their teachings, and interned with Fernand Léger as one of the famous “sub-Legers” who performed the “military service” of cubism; “of necessity, we bowed to his influence” (a career move Lygia Clark would make 30 years later). Having fully digested the heady mix of cubism, surrealism and art deco, Amaral married the French poet Oswald de Andrade, moved back to her native land and, together with her husband and the writer and musician Mário de Andrade (no relation) wandered the countryside absorbing its tropical forms, indigenous culture and colonial trauma. Deeply moved by the authenticity of what she deemed an urgently primal identity, Amaral reworked the local signifiers and, as evidenced by the palpable passion of these works, painted her heart out. 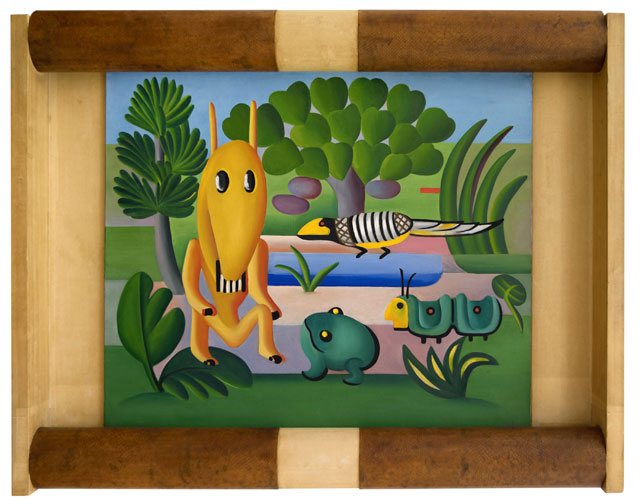 So far, so understandable: lessons learned and mastered. The surety of brush is indisputable, the spatial configuration, impressive, and the at-first-glance naive primitivism, charming. Such a joy, those fanciful creatures that inhabit the pre-colonial paradise of A Cuca (1924). What lifts this work to the higher plane of an original construct and a pioneering worldview is Amaral’s rethinking of modernism as a reverse palimpsest. Creating a living geometry from the contours of air, land and animals, she layers the intellectual western vernacular on to the nativism seared into her subconscious and, like the cannibalism practised by Brazil’s Tupi and Guarani Indians, devours it. “Tupi or not Tupi” overrides Andrade’s pun to probe the fundamental question of what is aboriginal, what is civilised, and how the fertile utopia born of the one can create a new visual primacy by swallowing the other. Introduced by Amaral’s seminal painting Abaporu (1928), “cannibalism” was parsed a year later in the outpouring of manifestos and poetry written by Oswald and illustrated with her sketches. Rejected in its time, but historically significant – it gave Brazil the avant-garde modernist movement that galvanised the subsequent generation of artists (Lygia Clark, Lygia Pape and Hélio Oiticica) who have also just taken their first-ever solo bows in the north west – the theory deserves serious attention. 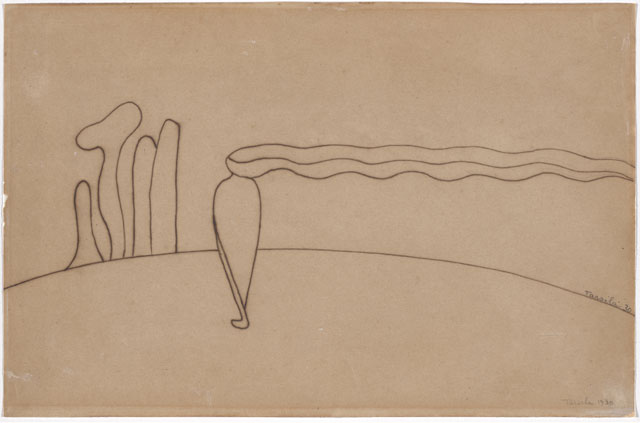 Plunge into it if you will, but, in anthropological terms, as documented here with original text, the treatise is something of a turnoff – at best, an investigation intellectualised to a degree more readily understood in the writing of the great Claude Lévi-Strauss; at worst, dated. 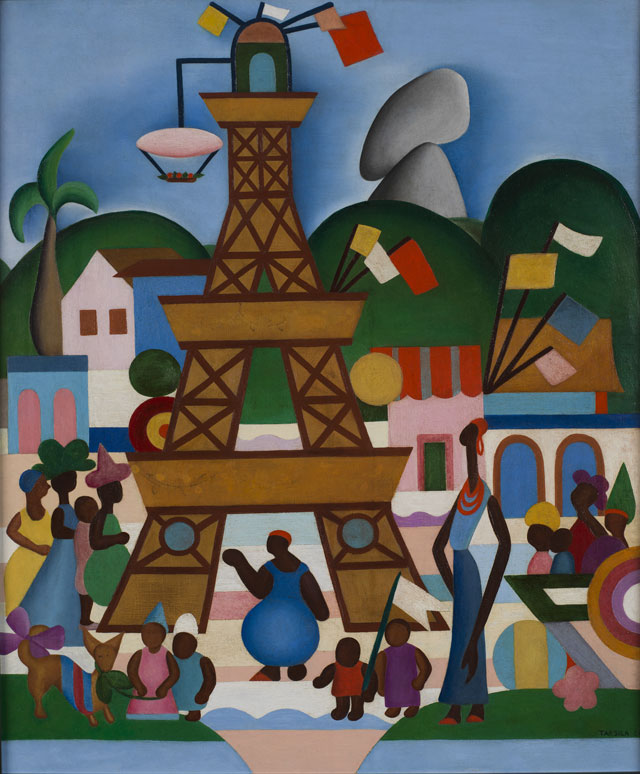 Better to immerse yourself in Amaral’s stand-alone renderings, where the idea of swallowing a culture so as to regurgitate it as a new paradigm builds to a visual climax that is startling in its relevance. In Carnaval em Madureira (1924), a native dancer raises her arms to own the effigy behind her of an Eiffel Tower constructed to westernise the festivities; in Morro da Favela (1924), a local farming community’s open fencing enables the animals and released slaves to move and congregate freely; in Cartão-Postal (1929) the picture-perfect tourist Brazil of the postcard is watched over by a wildcat ready to spring. Wonderfully enigmatic, the bull that walks both backwards and forwards like the quantum particle of racial assimilation that occupies two places at once, and those indigenous capybara prowling a grey netherworld that is kept in check only by the sun’s dominant radiance.

A triad of signature works, last seen together at MoMA’s 1993 Latin American Artists of the Twentieth Century exhibition, best encapsulates Amaral’s contribution. Addressing slavery, which Brazil was among the last nations to abolish, A Negra (derived from a photograph taken at her fazenda of a recently freed African servant, but painted in 1923 Paris, then itself in the grip of all things exotically black) joins a matriarchal culture’s emblem of fertility to a foundational study of emancipation, submission and the indelible stain of racial inequality. 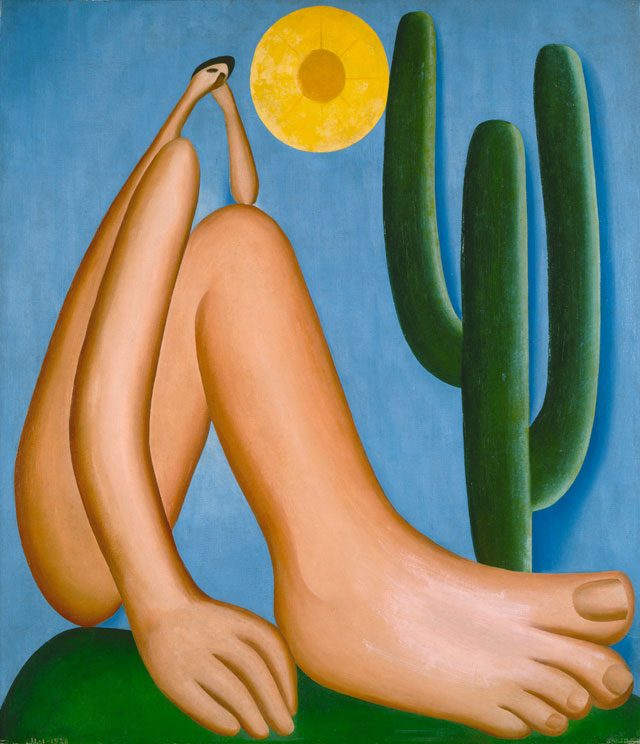 In 1928, by now fully immersed in her homeland’s implacable carnality, she produced Abaporu (a name derived from tribal words meaning “man who eats human flesh”) to represent a fantasised cannibal, warmed by the sun and distended contentedly by the process of digestion: devised to startle Oswald, it rocked him into pressing for a distinctly Brazilian hybrid style that would give Latin America a radically new aesthetic identity. 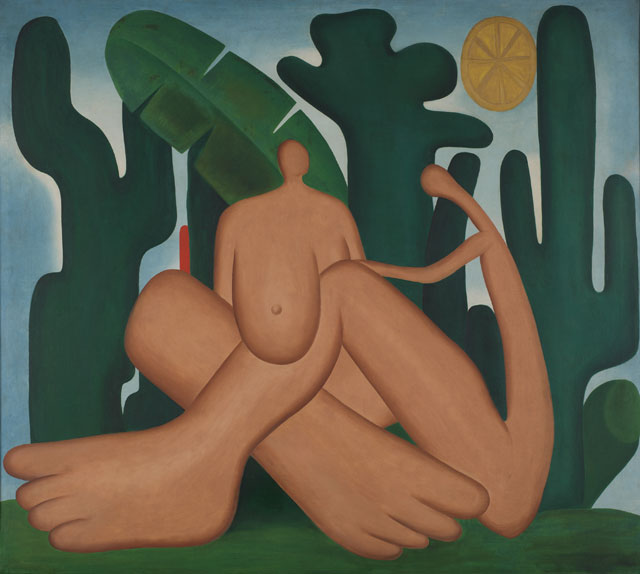 The following year, determined to fully express their utopian vision, Amaral painted Antropofagia, deploying every weapon in her arsenal to unite the prior two images. Proportioned to the dimensions of mythology, it is a masterpiece of sophistication and technical prowess. Exploring exoticism, body parts are reduced and magnified to convey the extent of human possibility; marking racial integration, a black woman’s pendulous breast hangs like a ripening fruit over the commanding branch of an indigene’s leg; rising organically behind them as the last bulwark against civilisation, Brazil’s fierce vegetation protects its utopic primacy

It is apt, but not comforting, that the exhibition ends with Operarios (1938), a large and powerful composite portrait of interracial workers trapped in an industrial grid. Justifying the curatorial decision to limit this retrospective to the formative years, Amaral’s subsequent work, though voluminous, is drier and more brittle, redirected to large-scaled depictions of oppressed workers and the socialist manifestos that she wrote and sporadically illustrated in the service of the Marxist philosophy espoused by her activist second husband, Osório César. The diligent mind will want to follow her career further – we are dealing with an icon here – but settle for the scope of this landmark exhibition and you will have sucked the marrow from her output. Digest it in your own time and you will understand the influence on subsequent art of this groundbreaking and deeply original visionary. 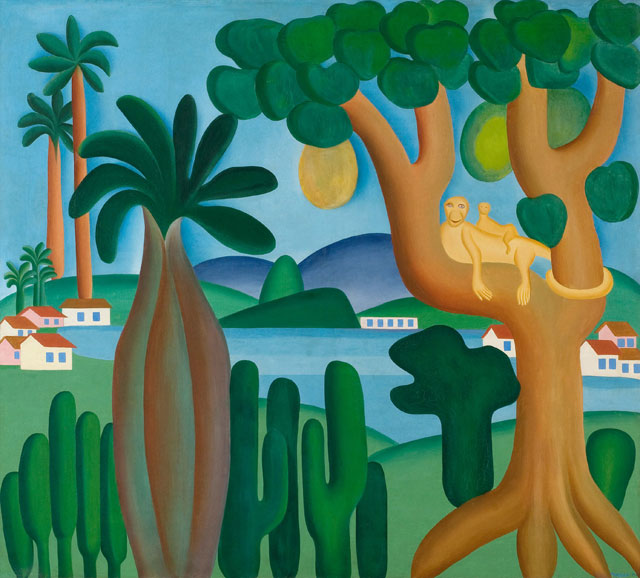 Recent showings at David Zwirner (New York) and Cisneros Fontanals Art Foundation (Miami) attest to Amaral’s impact on Latin America’s marking concrete/neo-concrete art movements. Let the late-career surveys of Etel Adnan’s faux-naive abstractions at London’s Serpentine Gallery and New York’s Galerie Lelong represent Amaral’s influence on the international artists who studied in mid-20th-century Paris. And to see how contemporary artists have translated her vision and vocabulary, look no farther than at the flat planes and simplified forms of David Hockney’s retrospective up now at the Metropolitan Museum of Art. It is high time for Tarsila, as she is affectionately known in Brazil, to claim her rightful place in the fast-evolving western canon. 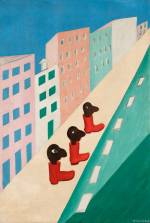 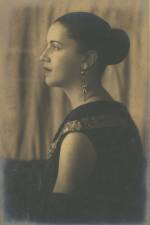