Léger is regarded as the father of pop art and, despite his harrowing experiences during the first world war, the works here reflect a sense of optimism 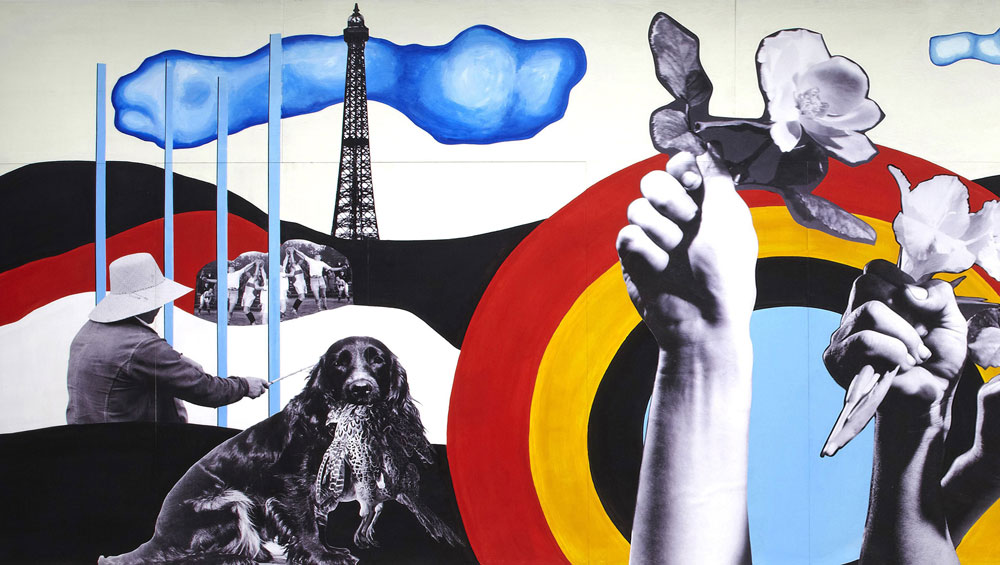 We have just finished the 100-year commemorations of the first world war, from the assassination of Archduke Ferdinand and his wife in Sarajevo in 1914 to the 11 November armistice in 1918, via each of the horrendous battles and events: the Somme, Verdun, Vimy Ridge, the sinking of the Lusitania and so on. Through restored film, recorded testimony, poetry and literature, we have been reminded – if ever we needed it – of the horror and inhumanity of the first truly mechanised war and killing on an industrial scale.

Artists played an important role in communicating this disaster to us, and it is arresting to see Tate Liverpool’s major exhibition of Fernand Léger (1881-1955) a soldier/artist who emerged from the trenches with his optimism, if not enhanced, at least undimmed. He was able to see – and demonstrate through his art – that the “mechanical age” that made possible slaughter on such a massive scale could also be the means by which peaceful societies could modernise and industrial progress could lift agricultural peasants and the urban proletariat out of poverty and into some sort of decent life.

Léger was influenced by the other great artists who were emerging with him, and took elements of advertising, street graphics, newspapers and printing to develop his own take on cubism and on into sculpture, film, textiles, exhibitions and murals. The way he combined all this in a bold, raw, energetic treatment – first of abstract subjects, then into figurative art – has led to him being regarded as the father of pop art.

His early abstract work uses forms and motifs from industry – gears, pipes, crankshafts, tubes, circular saws – in bright colours, with an “open” style, rather than the oppressive, gloomy, manner in which other artists approached the new mechanical age. The Disc (1918) is typical of this style, as is Mechanical Element (1924) – which those who were students in the 1970s will probably recognise as the cover art for the Penguin edition of Aldous Huxley’s Brave New World.

Léger was born in the same year as his friend Picasso, and another friend and important cubist, Georges Braque, was born less than a year later. Unlike those two, Léger was a country boy, but not of peasant stock. His father was a cattle dealer and the young Fernand was expected to follow his father. His parents clearly were not too authoritarian, however, because when he showed a talent for drawing he was apprenticed to study architecture – which, perhaps might have alarmed his parents less than if he had jumped straight into “art”.

Léger attended compulsory military training and when that finished, in 1903, he entered more formal architecture training in Paris at the École des Arts Décoratifs and Académie Julian, having been rejected for entry by the more prestigious École des Beaux-Arts. Despite the rejection, however, two professors from the Beaux-Arts recognised Léger’s talents and gave him informal tutoring. During this time, he made his living with architectural drawing and by retouching photographs – an early exposure to techniques that had a great influence later in his career. He also began to paint, at first in the impressionist and fauvist style, but after attending a major retrospective of Paul Cézanne, he began to take on elements of cubism. As he developed a unique style of slicing abstract and human forms into cylindrical shapes, it was – informally – labelled “tubism”.

Sadly, there are no examples of his early (pre-1914) work in this exhibition. It would have been interesting – and very helpful – to see his “immature” style, before he was confronted by the trenches.

His early painting career was put on hold in 1914 when he served in the French army. He was gassed at Verdun in 1916 and suffered a severe head injury as a result, for which he was invalided out of the army and sent home. He was hospitalised until 1917. Soldiers Playing Cards (1917) was painted during his convalescence from the mustard gas attack (from which he was lucky to escape alive). Yet, although it could be called “gritty”, it is by no means as hostile and angry as he had every right to be. It is an excellent example of his early tubism. Heavily influenced by Cezanne’s series of card player paintings, it shows soldiers in different national helmets, playing cards over what appears to be golden agricultural fields, perhaps awaiting the wheat harvest – an idealised version of the trenches. His soldiers have long, segmented, tubular arms, terminating at hands that resemble empty bullet cartridges, flicking over assorted playing cards as the men suck on their pipes. Although they are often described as “monstrous” in form, these soldiers – of different, warring nations – are enjoying themselves. There is no obvious suffering and even the bright colours seem to reflect the optimism that I find most characteristic of the works shown here.

In the early days of the Soviet Union, Léger was also inspired by socialist ideals and the conviction that art is for all not just the wealthy, and that modern art in particular could elevate the quality of life of working people. He began to incorporate those same working people in his paintings, as figurative work began to hold more appeal than abstraction.

He collaborated with other artists concerned with the fortunes of real people, making the world fit for workers and celebrating the lives and pursuits of ordinary men and women. With Le Corbusier, he created works for the series of grand exhibitions in the 1920s and 30s. With the architect and designer Charlotte Perriand, he created huge murals of photographs and graphics. The plans, sketches and photographs of many of these are included in this exhibition, as is an entire wall of the gallery taken up with a reconstructed photomural Essential Happiness, New Pleasures (1937/2011) from the International Exposition in Paris in 1937. The mural illustrates rural life, alongside an industrial tower, a jazz musician, a hunting dog and people enjoying their leisure – as an antidote to the economic depression and rise of fascism, and urging nations to cooperate to build a better future.

Also on display, but difficult to see in any detail, are his work in graphic design for magazines and other publications.

His film collaboration with Man Ray, Ballet Mécanique (1924) is a wonderful and energetic example of early experimental cinema, and Léger’s segment (The Girl with the Prefabricated Heart) of the 1947 film compilation Dreams That Money Can Buy, assembled by Hans Richter, is a very funny and creative “romance” between two shop display mannequins. If you can’t make it to the exhibition, you can find both of these on YouTube.

After the second world war, Léger devoted himself to the human figure, creating bold, outlined men and women with bright colours, sometimes simply imposed over line paintings of the figures. Such painting, for example The Acrobat and his Partner (1948), Two Women Holding Flowers (1954), and the well-known duo Three Women on a Red Background (1927) and Composition with Three Sisters, Final State (1952) on a blue background have enormously influenced graphic designers, illustrators and advertising.

Our national collections seem to have very few paintings by Léger and this is the first major exhibition of his work for three decades. Those are reasons enough for most casual gallery-goers not to appreciate Léger and his important role in how early modern art influenced other visual media, including book cover design. So this exhibition is most welcome. It would, however, have been greatly improved by a catalogue, with essays by relevant critics. Not to mention, since the exhibition makes some play of the “father of pop Art” idea, it would have been helpful to show exactly how he played such a role.