Cubism: The Leonard A Lauder Collection

Cubism: The Leonard A Lauder Collection

I remember as clearly as yesterday my 10th-grade art teacher standing by me as I stared at a grey, white and mustard Cubist painting that spoke to me not at all. The thing is, she said, you have to see several together. Many together, the largest collection of Cubism in private hands – 81 paintings, drawings and sculptures (three added since Lauder’s gift was announced) and still counting – this is the glory that the cosmetics heir has given the world, in the form of a promised bequest to the Metropolitan Museum of Art, on show now, on the first floor, behind Greek and Roman. There is an urgency to visiting now because, in February, all will be returned to the Lauder residence, until it takes up permanent lodging, as part of his estate, in the museum’s soon-to-be-reconfigured second-floor wing.

Gifted unconditionally and outright, this collection, valued at $1bn, fills a yawning gap left by the Met’s initial indifference to Cubism that recent bequests could not satisfy. Rightly called transformative, it challenges even the Museum of Modern Art’s storied collection with a full-blown, in-depth portrayal of the art-redefining experiment begun in 1907 by the four standouts of the field; Pablo Picasso (1881-1973) represented by 34 works, José Victoriano González-Pérez, AKA Juan Gris (1887-1927) by 17, Georges Braque (1882-1963) by 15, and Fernand Léger (1881-1955) by 15.

They came separately and together to solve painting’s remaining problem – how to insert volume into the plane surface with a multiplicity of perspectives whose rhythmic requirements would create a new language of visual perception. The effort was heroic. Every object at hand – vase, violin, the human body – was torqued, disassembled, distorted, fragmented, crystallised and  reconstructed, and when that vocabulary had been fully explored, they notched up the colour and collage to yet another level of hyper-reality.

For a generation weaned on the aftermath of Cubism, the impact of this collection will be that it is so fresh. The dulling effect of work rendered familiar through constant exposure inevitably leeches its power, be it aesthetic or political. It takes work fresh to the eye to convey the courage bordering on insanity that drove the breakthrough experiment that ended a centuries-old pictorial tradition. At the time the departure seemed sacrilegious and explosive, a revolution, and one not dignified by the moral absolution of barricades. What a shock to the system – those shattered forms, violent displacements, limbs, bowls, pipes, string, even colours in all the wrong places that sent out a clarion call to the art bourgeoisie to throw out everything that had come before, relearn everything and begin again from scratch. “The shock of the never seen,” Louis Aragon called it. Even Braque, the first to fall in line, when brought in 1907 by the French poet and art critic Guillaume Apollinaire to view Picasso working on Les Demoiselles d’Avignon (1907), its crooked nudes hinged to an oblique axis, was shocked, saying that it was as though someone had swallowed kerosene and was spitting fire. The “someone” was Braque; indeed, Cubism took its name from the art critic Louis Vauxcelles – alerted by Matisse’s dismissal of the artist’s “little cubes” – who attended the opening night of Braque’s solo show in 1908 and derided all the work as reducing everything to “cubes”.

At the Met’s opening night, to a person, the artists and dealers who filed by me – Pat Steir, Donald Sultan, Paul Kasmin, Barry Friedman, Peter MacGill, Desmond Corcoran – commented on the “joy”, “jolt”, “ridiculous pleasure” of not having a great part of the paintings reproduced in a book or exhibited. Even those, such as art patron Agnes Gund, well conversant with them from the Lauder home, thrilled to their collective power in a setting devoid of cushions and lamps. All credited Emily Braun, the collection’s longtime in-house historian, and Met curator Rebecca Rabinow for a superbly sensitive installation that, together with illuminating wall texts, instructs through subtle pairings and groupings of related material. That Lauder collected in depth allows for instructive juxtapositions – those of Braque and Picasso will have even the connoisseur guessing their authorship. No sooner had Picasso broken up the human body in Les Demoiselles d’Avignon (represented here by two studies) than Braque broke open the Cézanne landscape, by means of compression, suppression, elision and faceting to create a new geometry of basic forms (most heroically, here, in Trees at L’Estaque, 1908). Side by side they worked out the geometries of Analytical Cubism, peaking in 1911, and after Braque glued wood-grained wallpaper to a drawing to invent collage (as distinct from papier collé, relates a label, which is strictly the gluing of paper to paper), Picasso joined him in the explorations with newsprint and found materials that locked in the second phase, Synthetic Cubism, until an unstoppable flotsam of techniques, materials and everyday objects opened art-making to modernism and a vocabulary without limits.

These are the two giants here, with Picasso, as ever the taller, though Fernand Léger, who anchors the last room with the stunning Composition (The Typographer), 1918-19, is a formidable contender with 15 drawings and paintings that majestically rework Cubism’s formal components into fractured assembly lines. The surprise is Juan Gris. Seeing several of his works shown together (his output was truncated by a short life) brings home the significance of his contribution; the fastidious building up of illusion, the quietude, and most remarkably, the almost erotic use of colour to introduce an element uninteresting to his colleagues – the notion of beauty.

All call on the viewer for mental gymnastics verging on homework in the struggle for clues that will reassemble the scrambled objects in the mind’s eye – here a moustache, there a nose; here a cup, there a breast. Is that a skirt or upholstery? (Picasso, Woman in a Chemise in an Armchair, 1913-14); a glass or a face? (Braque; Still Life on a Table: “Duo pour flute”, 1913-14); plates or eyes? (Gris, Still Life with Checked Tablecloth,1915); ladder or arm? (Léger, Composition (Study for “Nude Model in Studio”), 1912). Much of the satisfaction – even, I would say, the visual excitement, is in successfully following these masters at their game. The rapture comes a beat later, with the first collages, as you understand the game to have broken open all the rules of perception to found an altogether new vocabulary, one too pervasive be capped under Cubism since it went on to inform every language that to this very day constitutes our understanding of art. Aragon called it right: “One can imagine a time when painters … will find it childish and unworthy of them to apply their own paints, and will come to see in that personal brushstroke which still today gives the value to their pictures, no more than the documentary interest of autograph. One can imagine a time when painters won’t even have the colours applied by others, will not even do any drawing. The collage gives us a footnote to that time.”1

Access to the top collection of a period now understood to be the gateway to art of the 20th century would be wondrous enough. Giving this show the added fillip of insider information is the exhaustive catalogue’s shared story of how it all came to be. Sometime in the 70s, before lipstick could be sold for enough to build up a fortune, Leonard Lauder looked around to see what appealed to him that carried more weight than the postcards and posters that had triggered his collecting bug, that still was affordable and could be collected at a very high level. Drawn to Cubism by a few happy purchases, Lauder studied, read, looked, and talked with every art world figure who could help him navigate the murky waters of estates and auctions. The hunt on, Lauder pursued every coveted work to the ends of the earth, and to the owner’s eventual decision to sell, waiting years – even decades, on the occasion of the outsize Léger, Composition (The Typographer). The secondary market alerted, masterpieces came out of the woodwork one by one, making their way into Lauder’s collection if they met his criteria of condition, relevance and, as with the many paintings once belonging to the British art historian, critic and collector Douglas Cooper (1911-84), impeccable provenance. There wasn’t a gallerist who remained ignorant of Lauder’s passion, but what makes the quality of this collection doubly remarkable is the relatively small role they played. While such as Eugene Thaw, Desmond Cooper, Franck Giraud and Stephen Mazoh could be counted on to provide pristine material, there were no art dealers at Leonard Lauder’s elbow, as Joseph Duveen, Bernard Berenson and Ambroise Vollard had been at Henry Clay Frick’s, Benjamin Altman’s, Isabella Stewart Gardner’s and Louisine Havemeyer’s – dealers who, as late as the 70s, with Cubism’s champion, Daniel-Henry Kahnweiler, rose above the easy sale and quick return to steer the dedicated collector towards building a marking body of work for, not status, but the ages. Lauder does credit the connoisseurship of the art historian Emily Braun and the guidance of his younger brother Ronald, whose own collection, famously focused on German Expressionism, was given to New York in a precedent-setting gesture of largesse, gift-wrapped in the Neue Galerie. At the opening gently skirting the tricky shores of sibling rivalry, the older brother touchingly acknowledged the influence of the younger in a toast to Ronald’s mantra; listing all works of art as “Oh”, “Oh My”, or “Oh My God”, always go for the latter.

The kick-off dinner transformed the Temple of Dendur – which has seen a thing or two since it bordered the Nile – into a cubist construction, as lights played off its surfaces to deconstruct them on the walls. All attending commented on how the Pharaohs would have loved to have been profiled with two nostrils, ears and eyes, and on how, thanks to Leonard Lauder’s generosity, the public will be richly introduced to four pre-digital giants who could have done so.

Thinking back to my initial disinterest in Cubism, I plead with you to navigate your way around David Koch’s $60m fountains, climb the Met’s freshly cleaned steps, spring for the catalogue – a teaching tool sans pareil – and steep yourself into a world of “Oh My!” that Leonard Lauder quite rightly calls “a treat for the soul”.

Reference
1. Quoted in Picasso: Artist of the Century by Jean Leymarie, published by Macmillan 1972, page 41. 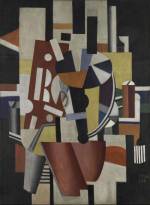