Brice Marden: A Retrospective of Paintings and Drawings

Brice Marden: A Retrospective of Paintings and Drawings

The work of American painter Brice Marden is currently showing in a major retrospective at the Museum of Modern Art (MoMA) in New York. This is timely, and the 56 paintings and over 50 drawings should bring the work of this outstanding painter permanently to the fore.

His first exhibition in the autumn of 1966 at the Bykert Gallery in New York had drawn the attention of Studio International correspondent Dore Ashton to an 'exceptionally good' display of his drawings.1 As Ashton commented, 'I have rarely seen such intensely concentrated, highly finished drawings by a younger artist. Some of his drawings are very light and they, too, are worked over with tremendous care in order that the finest nuances of light are not lost. Marden's artistry is impeccable'.

Ashton gave Marden a further accolade late that summer,2 this time commenting on the paintings, as shown then at the Bykert Gallery. 'What is it', asks Ashton, 'that gives these highly restrained paintings their authority? I think it is Marden's extremely subtle technique, which enables him to suggest a light-held prisoner behind the final impervious surface.' As on so many other review occasions, Ashton here grasps the essence of Marden's drawings and paintings, which essentially react to natural light. This is why there are two seemingly incorrigible flaws in the MoMA show: first, that there are very few instances where the galleries filled can supply other than artificial light - an architectural flaw and not strictly a curatorial fault. Second, that the paintings and drawings virtually form two separate exhibitions on separate floors. It is to be hoped that this flaw can be remedied at the San Francisco Museum of Modern Art in February, for it is by no means insurmountable.

For Marden, the square painting, as such, could not exist after Malevich, and these constraints led to that superb distillation by the artist of the American landscape, as emerged through the panels of 'Nebraska'. It was due to Marden's skill that such a painting could capture the essence of a perceived memory of what the Nebraska landscape through which he drove really amounted to. The fact that the painting was accomplished in a wholly unemotive grey simply underlines the essential ambiguity. It was this quality, and the self-discipline from which it sprang, which strengthened what was for Marden no less than a comprehensive ordinance of self-denial. After this, Marden was to reinvent the longstanding traditions of painting for the later 20th century, and it was this energetic reassertion of the medium that drew in the support of colleagues and ostensible peers at a time when painting was generally acknowledged by critics and galleries to be at a low ebb.

Marden's paintings have always expressed the quality of paintedness. When he looked at Manet, this was to mean that he saw again Manet's picture plane as it related to brushwork. In contrast to his appraisal, say, of the works of Malevich, which long preoccupied him (as compared to Stella's reaction, when he literally disavowed the spirituality of Malevich), Marden, by contrast, searches Malevich for that essence. What was important for Marden was the opticality and physicality there, also rejected by Stella. Marden was seeking to reaffirm and to reinvent the long historical tradition of painting. The large, monochromatic works of this time, when painting seemed to be edging into terminal decline as a contemporary art form, were just what painting needed. These works seem to set out new parameters to contain the surge of experimentation following Sixties art. What was it that differentiated the work of Marden when Frederic Edwin Church and Clifford Still seemed to have laid down the 'road map' for American landscape painting, in a mould of self-conscious historicism? Only Marden could, in a separate context, have contrived to take, from the Louvre, no less, Goya's painting of the Marquise de la Solana, a work covering three panels: 'D'Apres la Marquise de la Solana' (1969), precisely distils the three colours chosen by Goya. The cue is the large pink hair bow, projected into a palette that is essentially mauve, khaki and dark grey, leaving the bottom surfaces and edge of the canvas unpainted. Like the flourish of a petticoat below a sober court dress, Marden briefly reveals feelings otherwise suppressed, as Goya.

Now Marden was operating in the presumed vanguard of American Minimalism of the late 1960s, possibly with some reference to Sol le Witt. But he was ahead of the game. The drawing, 'Patent Leather Valentine', for example, seems at first to make that connection. Beeswax and graphite in this drawing overlay a remorseless black grid of tightly meshed lines and Marden then inscribes the tiny image of a human heart in each and every grid square. Such is his validation of the traditional Valentine motive, which Marden dedicates to his future wife, Helen Harrington, and surely an irrefutable gesture of love. Marden is on record as saying, 'I still really felt much more of an Abstract Expressionist than Minimalist. I mean, I wasn't rejecting Abstract Expressionism and I was very conscious of the fact that these works were being made by hand.' Marden would later say that he responded more to Rothko than de Kooning (who he also admired): 'The whole idea of beauty was not embarrassing to me as it was for a lot of people. It's one of the things that was encouraging about Rothko, that he didn't seem to be embarrassed about it either.'

Drawing has been pivotal to Marden's work, which is why at the current show, despite all its deep curatorial commitment, it has been a faux pas of some concern that all the drawings have been rigorously separated on another floor from the main exhibition. For here it can be seen how drawings with sliced down surfaces, with collage, even blotting, reflect a sensuality more compelling than the paintings on their own, yet wholly seen to be interactive with these.

Where the drawings are concerned, Marden's first long trip (1986) to the Far East, India and Sri Lanka brought an exciting response from him to the calligraphy based skills he had observed. Again, the initial response came naturally, through his drawing. There had already occurred his first acquisition in 1973 of a house on the Greek island of Hydra. Typically, 'Grove Group IV' (1976) had absorbed already Aegean light factors, impacted and directly expressed. In 1993, Marden was to complete his magisterial work 'The Muses'. Earlier, in 1986, he had already fused his drawings with the paintings, a process which had gestated over many years. Now, 'The Muses' was to represent the summit of this process of metamorphosis. Fifteen feet long, it can be read as a horizontal frieze in a distinctly classical mode and rhythm. It resonates subtly with soft green hues, grey marble and white and Aegean blues. The field itself is a lighter green still. As with any rippling surface, it is difficult to catch the subtle interaction of marks and lines. The pediment of a Grecian temple would amply contain such movement, such an interactive enigma, conveying this from a respectable distance. The Muses, being goddesses, are taken to be appropriately elusive and look and recede beguilingly: by there they interact.

The outstanding early catalogue (1981) from the Whitechapel Gallery by Nicholas Serota (with essays by Stephen Bann and Roberta Smith) was an exemplary introduction to Marden. Only now has Curator Gary Garrels provided the fully definitive successor from MoMA.3 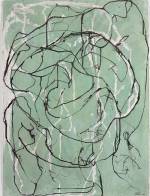 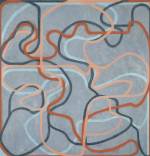 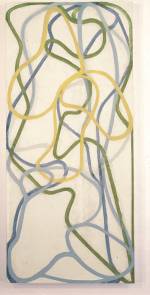 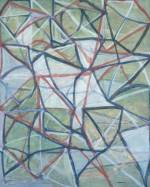