The Whitechapel Gallery in East London was founded in 1901, Whitechapel itself was at that time a remarkably cosmopolitan part of London, where large numbers of late 19th century immigrants settled, principally Eastern European Jews and Russian political exiles. These migrations however had formed part of a much longer-standing tradition whereby Huguenot, Portuguese, Spanish, Irish and earlier waves of Jewish immigrants had traditionally on arrival in the Port of London by sea or by train from Harwich, made for this honeycomb of streets, workshops and markets. Arguably this street culture was fragile, but it was also robust by the character of its immigrants who had experienced untold hardships across Europe to reach East London. As Iwona Blazwick OBE, the gallery’s current Director has said, ‘East London is one of the world’s crucibles of culture’.  It has also become a formidable entrepot for artists over the century and more that the Whitechapel Gallery has existed, together of course with the Passmore Edwards Library adjoining it. Such famous exhibitors at the gallery include David Bomberg, Jacob Epstein, Mark Gertler and Isaac Rosenberg. This area of East London contains more artists’ homes and working studios than can be found in a similar concentration in any other European city even including Berlin.

The Whitechapel Gallery was designed by the architect Charles Harrison Townsend, who was an ideal choice at the end of the 19th century. His ample trade mark of a round-arched, broad spanning entrance (deliberately without any imposing steps from the street) bears an affinity not only with the slightly earlier library next door, now the basis for the gallery’s own expansion, but also his similar wide-arched rounded entrances there typify the Horniman Museum as well as the Bishopsgate Institute in the City. Further afield the round-arched entrance was particularly prevalent in continental avant-garde architectural thinking at the same time, as in Helsinki, where in due course both the main railway station and the later smaller version at Viipuri pursued this vein. The influential Finnish architects Frosterus and Strengell familiarised themselves with ideas emanating at that time from the Townsend office in the somewhat earlier Passmore Edwards Library. That and the Whitechapel Gallery itself can be seen to have been plugged in by Townsend into a wider continental mainstream of ideas. Both Strengell and Frosterus had been influenced by Townsend’s ideas on visiting London. The final version of the Helsinki station bore more than a passing resemblance to Frosterus’ own original competition entry when finally completed. There were also contacts by the two Finns, with Victor Horta’s studio in Brussels, at an earlier stage, another enclave of Jugendstijl design.

What all this meant in the impoverished East End of London was nothing less than transformative. Passmore Edwards was a social radical and funded the gallery with a clear social remit. Now, the combination of the two buildings has been a masterstroke. It has given the original gallery premises, which have greatly supplemented and extended the somewhat cramped but very elegant expansion that was essential for the proper functioning of the gallery post-war, as devised in 1988 by architects Alan Colquhoun and John Miller to much acclaim at the time. Today, the addition of the library spaces within a £13.5 million capital budget has provided a 78% increase in gallery space – a formidable transformation of the Whitechapel Gallery into the upper league of internationally acceptable exhibition spaces. The architects are Robbrecht en Daem, the Belgian firm, with the London practice Witherford Watson Mann. So interestingly, the Belgian link has been revived, as has been the interesting connection via Strengell, with the designs of Alvar Aalto, whose work he had encouraged through Artek, founded by Aalto, a complete ’family’ of furniture has today been provided for the public spaces of the Gallery.

Purpose-designed spaces for learning and education, including two project galleries, a research room, (for the Whitechapel Gallery’s History Archive), are joined with a new Education and Research Tower. This fulfils a pioneering remit from the foundation year of the Whitechapel, to develop education and every person’s innate potential, where possible. A new resource-based programme will offer the Study Studio, for networking, discussions and work shopping: there will be an annual Writer in Residence programme. Clore-backed Creative Studios will take a ‘penthouse’ position high up, with views over Spitalfields. A link with London Metropolitan University will be established as an MA Course in Curating Contemporary Art, fulfilling a long perceived need and unique for the UK. A new dining room, café/bar and bookshop will provide the ambience and casual centrality that the Whitechapel always possessed in a new and expanded form. The dining room actually emphasises interaction with the local community by means of its alignment facing the street, hopefully also enhancing the night scene.

Accordingly the major programme of exhibitions laid on by the Whitechapel Gallery in one sweep celebrates the formidable history of the Gallery as a local and a national catalyst, as well as opening a new and diverse cultural chapter for this unique organisation. This has perhaps, been the single most important art event of the whole year for London, no less. Nor should it be overlooked that in the new dining room chef Maria Elia now devises and produces recipes redolent with creative colour and gastronomic flair, all a feast for the eyes in the street. It’s hard not to come in. So step over. 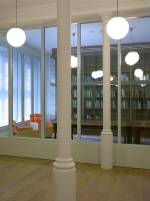