Rotting hams, kippers and kebabs; cucumbers, bananas, zeppelins; melons, lemons and fried eggs. Sarah Lucas’s body-part metaphors are far from subtle. Crude, and conjuring up a raw, base, animal sexuality, her androgynous gestures are hermaphroditic to the hilt – none of this could-be-one-thing, could-be-the-other. No, Lucas’s constructs are absolutely and fully both.

Born in 1962 and part of the Hirstian Goldsmith’s generation (albeit two years his senior), Lucas took part in the now notorious Freeze exhibition of 1988. Running “The Shop” with Tracey Emin for six months in 1993 and dating Gary Hume and Angus Fairhurst (who later killed himself), she lived YBA (Young British Artist) life to the full. In fact, her credentials as a 1990s party animal stretch as far as her sometimes (self-)reportedly going out to post a letter and returning a week later.

This hedonistic lifestyle of an enfant terrible is all too clearly reflected in her work from the period too. Stained mattresses – she piloted this with Au Naturel, strategically adorned with two melons and a bucket, two oranges and a cucumber, in 1994, four years before Tracey Emin “borrowed” the idea for My Bed – gutted sofas, breeze-block furniture and walls. Discarded boots, cigarette butts galore. A student hovel? A whore’s den? A drug addict’s squat? At best perhaps truthful; at worst, nauseating.

The whole of Gallery One at East London’s Whitechapel Gallery is, this autumn, filled with all these “highlights” of Lucas’s early works, strewn across the floor, and plastered on the walls. The breeze blocks double up as furniture for visitors and plinths for her works. “Because the works are like people, having the furniture really helps,” she says, confessing to always having trouble figuring out where to put things in big shows with big spaces.1 Hence, perhaps, the feeling of it all having been thrown in willy-nilly. Elsewhere, crushed car wrecks are also gainfully employed as plinths for her equally car wreck-like works.

Bundles of tights, knotted and disfigured, discarded like amputated limbs. Concrete arms and moving hands, at first glance reaching out to greet you, but no, reaching out to greet themselves, as one title – Mechanical Wanker (1999) – makes clear. “Rude not crude,” as a fellow critic suggested to me.

And then, of course, there are the toilets – Lucas seems to worship them as if they were fetish objects. Certainly, her sense of humour – if, indeed, it is even intended to be humour – is very lavatorial. One corner wall hosts the piece Five Lists (1991), each page scrawled with an A-to-Z of slang terms for excrement and urine, the penis, homosexuals, masturbators and the vagina respectively.

Self-portraits are another common feature and one that is used almost like an encyclopaedia for Lucas’s extensive repertoire of motifs. In one she is hunched up on a toilet with a fag, in another she is eating a banana, in a third she sits with a somewhat grubby skull between her feet. The skull is not the only portent of death in the show. Coffins also feature a couple of times upstairs, made both of cardboard and of orange neon. Memento mori? A wild youth catching up with a not-so-young-anymore YBA? A perhaps not-so-coincidental overlap in subject matter and media, either? And yet she avers: “There are very few artists that I take a cue from – and Tracey and Damien aren’t among them.”2

Cues are nevertheless liberally taken from elsewhere as well. Think Yayoi Kusama and her phallic Accumulation sculptures, Hans Bellmer and his dysmorphic limbs and Maggi Hambling and her sculptures made from cigarettes during her juvenilia experimental phase to name but a few. There’s really nothing all that new in Lucas’s genre.

The romp through her early work is contrasted with her more “mature” work – including bronzes cast from her earlier Nuds and Tit Teddies (here, think Louise Bourgeois) and some supersized cimente fondue phalluses – shown in Galleries Eight and Nine upstairs. “It’s a new era,” giggles Lucas tipsily.1 Has the artist finally grown up? Although having recently moved out from London to Suffolk, to live in the cottage that once belonged to Benjamin Britten and his partner, tenor Peter Pears, Lucas, unlike most of her contemporaries, still smokes and drinks like a trooper. Her appearance is dishevelled, with gappy golden teeth and unbrushed, lank and matted hair. Her fingernails are chewed, and – caught in a time lapse – her favourite jeans are still tie-dye. For a long time, she had a “reluctant” relationship with making art and confesses to sometimes getting a little disillusioned with it. That said, “It is quite a magical thing making art, when the magic happens,” she happily chirrups, and, clearly, more often than not it still does, since Lucas continues to refer to herself modestly as a wizard.

Grayson Perry in his first of four Reith lectures3 questions who it is who, these days, judges whether something is good or bad art. His suggested arbiters include the critic, the collector, the curator and the public. So how does Lucas fare? Well, while some might call her work trite and gimmicky, others rate her as an art star. Damien Hirst describes her as the greatest artist he knows,2 and with regards to curated exhibitions, alongside near perpetual showings at her friend and dealer’s gallery, Sadie Coles HQ, this is her second recent retrospective in a major UK gallery, the first being at Tate Liverpool in 2005. She sells well, too, breaking her own auction record at Christie’s this month, when her self-portrait from 1997, Fighting Fire with Fire (6 Pack), fetched £290,500.4 Finally, the public at the Whitechapel seem to love her early works. That is, at least, the tittering teenagers on a school trip and the sweating old men who were there when I visited.

Personally, I find it all quite puerile and bawdy. While there is no reason those two adjectives cannot go hand in hand with art, even good art, I dare say, I really do struggle to regard these childish sculptings and playground genitalia as culturally worthy artefacts. Maybe they really do speak of a generation? This was even suggested to me as I flailed around asking friends and colleagues to see whether I was ignorantly overlooking some great star quality: “She's the doyenne of in-yer-face street wisdom. She brings adolescence into Duchamp. The Brits invented a brand of adolescence through pop music and then this lot [the YBAs] made art at a similar level. It fits into an immediate attention span.”5 Maybe I came to it all a little too late in the day? Or maybe I want something that demands of both its artist and viewer just a little more thought? And besides, it has all been done before – first by others and second by Lucas herself, time and again.

1. About Sarah. A documentary by Elisa Miller. Sadie Coles HQ and kurimanzutto in association with Molinera Cine, 2013.

2. Sarah Lucas on being as provocative as ever, by Alastair Sooke. The Telegraph, 10 September 2013, available online at http://www.telegraph.co.uk/culture/art/art-features/10291955/Sarah-Lucas-on-being-as-provocative-as-ever.html 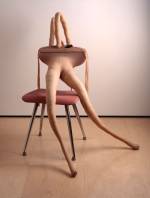 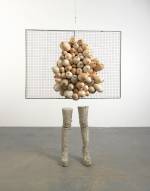 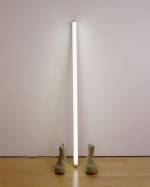 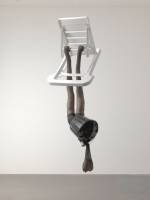