British Art Show 7: In the Days of the Comet

British Art Show 7: In the Days of the Comet

Time is a man-made concept; as such it can be mapped, manipulated, reflected on. While much contemporary art uses the medium of video to explore this idea, Christian Marclay’s The Clock (2010), featured in British Art Show 7, exemplifies it by “making” time from the intersection between time’s measurement and daily life

In this film, Marclay has severed moments in filmic history from their original contexts and grafted them into a 24-hour “narrative”. Yet this is narrative understood in its loosest sense, made up as it is of parts of films in which clocks appear, so that car chases merge into chess games, digital watches into cuckoo clocks. Matched with the exact time of day in reality, The Clock is not only a repository for and exploration of cinematic decisive moments; it shapes out a present in which the viewer can’t help but reside. Watching The Clock is mesmerising, almost soporific; it sucks time away while dragging the idle mind relentlessly into the moment – here, now, here, now. 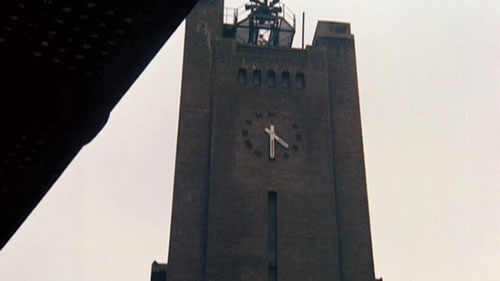 By conflating past and present – the recorded with the actual, real moment – Marclay’s clock epitomises the ideas at work behind British Art Show 7. The British Art Show is by definition a collation of the “here and now” of British art practice, and continues a 35-year tradition which attempts to gather and survey the status of British art every five years. It is itinerant, having started in Nottingham last October and continuing on to Glasgow and Plymouth after the Hayward, and, with the exception of the Hayward show, it is sprawling – it was split across three spaces in Nottingham, and will cover three in Glasgow and five in Plymouth. Thirty-nine artists and artist groups are brought together to offer a slice of British contemporary art, with the intention of presenting rather than representing a time and place through the work, as Lisa Le Feuvre makes clear in her catalogue essay “Present Tense”: “The work here does not represent the world, it is of the world.”1

While attempts at thematic cohesion among the works have been avoided, the show’s subtitle, In the Days of the Comet, provides an “evocative motif”2 grounding the work on show in specific ideas: those of history’s repetitious nature, of the possibility of conflating a past, a present and a future, and of what precisely constitutes the present if the work on show is conceived to be produced in a “five-year-long ‘today’”.3 The show’s subtitle refers to H G Wells’ 1906 novel of the same name in which an appearance of Halley’s comet triggers the emergence of alien green gas that is channelled to bring about a “Great Change” in society, an ordered, utopian way of living to replace one based on war and exploitation. Yet it is not this utopian vision but the comet itself that feeds the curators’ understanding of British art as it is now: as a source of wonder that appears only every 75 years, the comet is both aesthetic spectacle and marker of time and place. It grounds its witnesses in the present, yet in its cyclical re-emergence it represents history returning, ever-burning, while always moving in a way that characterises the passage of time “in the moment”. The artists selected for British Art Show 7 not only emerge from their time; the curators also perceive their work as addressing the idea of history itself, its comet-like recurrence as well as its insistent contemporaneity.

Such a project becomes tenuous as soon as it departs from the drawing board. Marclay’s The Clock provides the best, if not the only, clear connection to the comet motif. The eclecticism of the remainder of the show makes it difficult and often limiting to follow this motif through. There are nonetheless peaks of intersection that justify the curators’ efforts at visualising the comet’s centrality to the show. 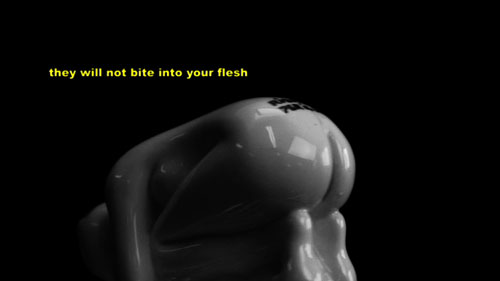 Elizabeth Price’s video piece User Group Disco (2009) is a shiny, retro, linguistic exploration of time. In this piece, the collaboration between object and word constitute a monochromatic museum of consumer indulgences. Domestic appliances and electrical items dance and whirl through a black void to an electronic soundtrack, while phrases such as “This is authority” and “This is the strategic apex” slowly appear and disperse around them. Price’s theatre of objects conflates the advertising slogan, the museological hoard and hallucinogenic cinematography to present an anti-still life. Objects spin through time and space, their in-built obsolescence and retro designs dragging the viewer back into the past while the objects themselves move forward into the contemporary age, inhabiting new life there. 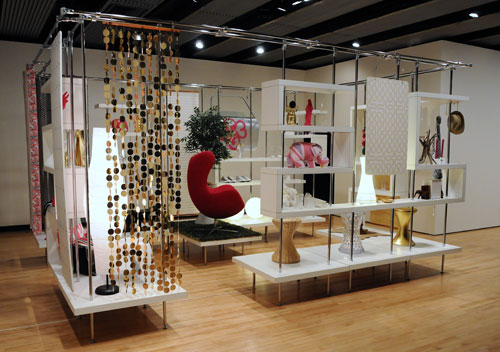 Price’s critique of consumerism and display resonates with Matthew Darbyshire’s An Exhibition for Modern Living (2010), also on show in British Art Show 7. Darbyshire’s small exhibition of domestic decorative objects places a spotlight on mass contemporary taste, emphasising the contradiction between the concept of the home as an intimate, personalised place and the imported living environments that the market, not to mention friends, recommend and impose upon it in the form of mass-produced lamps, rugs and furniture. The distasteful genericism of this reveals itself in Darbyshire’s display through the pink tinge and the sickly smell of new plastic experienced by viewers as they pass through it. 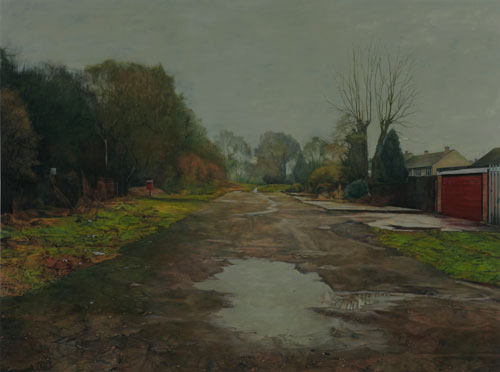 Price and Darbyshire’s works imply a collective, material history, one lived and perceived through the objects that were produced and selected at the time. By contrast, George Shaw’s paintings explore a deeply personal history: in his large-scale depictions of his childhood home, the Tile Hill Estate in Coventry, Shaw reveals that the past can be both remembered and reworked – even rewritten – through visual means. The paintings are based on photographs Shaw took on return visits to the estate; he then revisited the photographs in order to make paintings from them. These dark, deadpan scenes give a sense that returning to the estate and to his memories, and creating new visual representations of them, has had the effect of layering time such that the paintings both recall Shaw’s past and seal it further into history. While it is the pull of the past that lies at the heart of our motivations for taking photographs, Shaw’s reworking of those scenes results in heightened reverie as well as heightened realism. 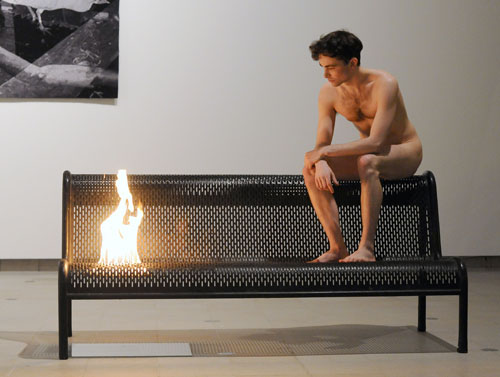 The show's sensation piece has undoubtedly been Roger Hiorns' Untitled (2005–2010), a rusted park bench underneath which a flame periodically flares, accompanied on occasion by a young man, live and naked, who sits and stares wistfully at the flame. Entertaining though this is, Hiorns is represented in the show by another, far subtler and more beautiful offering: in Untitled (2009), coarsely rendered islands of epoxy resin hang in a group from the ceiling. They sway slightly and meditatively, glowing with a golden light that filters through to cast deformed shadows on the floor. The catalogue label reveals that they are made from epoxy resin and “prayer”; Hiorns took the pieces to “local congregations” and made the spiritual material by layering it onto his preformed sculptures like an invisible shroud. Though neither of these pieces by Hiorns seem to radically address the notion of time’s passage and repetition that supposedly characterises the work in British Art Show 7, they continue Hiorns’ exploration of the intersection between the sensational and symbolic potential of materials that has won him deserved recognition on the British art scene in recent years (and is reflected in his Turner Prize nomination in 2009).

A similar focus on materiality emerges in the work of Karla Black. Her piece in this show, Brains Are Really Everything (2010) – a kind of pyramid formed from soil and mounted with bright yellow and red powdered soap – sits heavily and mutely, seeming to reject the buzz of theory that lies behind the exhibition through its sheer dead weight. Equally impassive are Cullinan Richards’ contributions to the show: a dispersed installation which includes paint cans sitting in a corner, rolls of packing plastic covering walls and neon strip lights descending from the ceiling. Cullinan Richards bring behind-the-scenes processes of mounting an exhibition to the fore, thus questioning the notion of display, yet their work resonates more with the language of the Hayward’s concrete curved stairway from which they can be viewed than it does the with exhibition's overriding narrative of temporal fragmentation.

This fragmentation does reveal itself in places: in Olivia Plender, Craig Burnett and Nick Santos-Pedro’s The Lost Works of Johan Riding (2010), for example, in which time, place and person form a fiction that highlights the ultimately contrived nature of history. Johan Riding is a fictional film-maker whose life has been researched and archived by one Dr Roger Quallen (also fictional). The piece itself consists of a faked archive of scripts, props, posters and correspondence that supposedly form the remaining materials of Riding’s existence. In this work, Plender, Burnett and Santos-Pedro critique the integrity of the archive by revealing historical reconstruction to be effectively mere construction; plucked from nowhere, the layers of falsehood that surround Riding and Quallen could be dispersed in an instant, yet their physical presence in the form of a cabinet of remnants and a biographical timeline, seen in the context of the gallery setting, create a fortress of truth, albeit a fragile one. 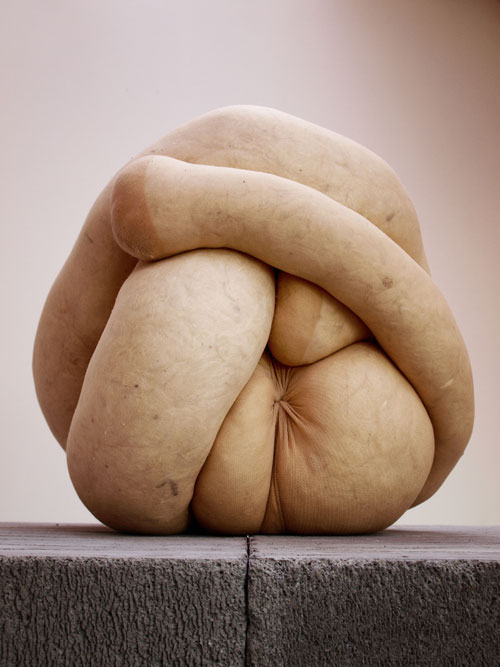 The British Art Show is as ever a showcase of the state of current British art, and if this year’s exhibition suffers at all it is from an over-complication of theme. Where several of the artists seem to have been chosen for their work’s sheer sophistication or aesthetic quality, others’ work has a discernible connection to the idea of the comet that is nonetheless dubious. Sarah Lucas’ 2010 NUDS series of stuffed-sock sculptures is among these; in alluding to art historical precedent (Picasso, surrealism, the traditional nude), NUDS makes a literal return to the past that forms a distinctly banal approach to the notion of historical narrative and temporal recurrence. Ironically, the problem at the heart of a show which turns the idea of the contemporary in on itself is outlined by Le Feuvre herself in the exhibition catalogue: she asserts that “the moment a tendency can be described or comfortably named, the present loses its charge”.4In making history while trying to address history, British Art Show 7 inevitably sacrifices some of its urgency; yet if perceived as an exhibition with its own historical role to fulfil, the show regains purpose and suggests an intriguing five-year future for art in Britain before the next show comes around.