Harper Road is an unremarkable south London street, flanked by the blocks of large post-war housing estates, convenience stores, a new mosque and a small park. Yet one low-rise council house, derelict and scheduled for demolition, is the setting for an ambitious sculptural installation by Roger Hiorns.

After donning rubber boots and gloves, the visitor is allowed access to one of the ground-floor flats. Stripped of everything, right down to the light switches and carpet, it is a desolate space, the wallpaper the only indication of its former life. Then, stepping through the bathroom wall into the next-door flat, one enters another world. It shares the layout of its neighbour, but every surface is covered in a deep, encrusted layer of blue copper sulphate crystals. The walls bulge, protrude and bristle, reflecting white glints from naked bulbs. The ceiling is furred with smaller crystals, whilst long blue scales hang from pipes. The floor is an uneven crust of green tidal residue pocked with bootprints. In the corner, a drift has built up over an unknown object. It is the scene of a disaster, a drowning, an uncanny transformation.

Hiorns has worked with this substance before, immersing car engines, architects' models and thistles in slowly-cooling copper sulphate solution, allowing crystals to form over them. Making this piece was a more complex undertaking, and involved sealing the bedsit in a steel-reinforced tank, before pouring in 70,000 litres of hot toxic liquid. Not until the tank was breached two and a half weeks later could Hiorns know how, or even if, the crystallisation had proceeded. This 'massive loss of control', as he describes it in an interview in Artforum magazine,1 is a crucial aspect of the work.

Hiorns implies that the crystal growth - occult, liquid and unpredictable - usurps the 'governing rationality'2 of such modernist housing schemes, making 'Seizure' just that, a taking over by the non-rational and non-human, a mineral squatting. The crystals have blossomed like alien flowers even in the furthest recess of the flat: the abandoned bathroom. A mound of residue makes passing through the narrow door difficult; inside, there is a single bath, encrusted so thickly that it has been estranged from its former function.

Freud's observation comes to mind, about how the word heimlich - homely - has buried within its several meanings one, '... what is concealed and kept out of sight ... ', that makes it shade into its opposite, unheimlich or uncanny.3 For Freud, that which is most intimate is also that which is most concealed, and in sealing these walls under their estranging layers, Hiorns is underlining the unknowability of other lives. As he says in an extract from an interview with James Lingwood, '... crystallising the interior of one of the flats is an odd thing to do, it's negating a space which contained an experience which we have no idea about, no access to.'4

In the same Lingwood interview, Hiorns expresses an 'interest in brutalist architecture', although such an interest is never purely formal, and is not yet dissociable from an attitude, whether sympathetic or dismissive, towards that particular set of utopian assumptions and ideologies which provided the basis for many of the mass housing projects of the post-war years. Despite the fact that Hiorns is distrustful of the 'idea of a collective' that these buildings seem to embody for him, it could equally be said that his intervention is a continuation (even if as shadow or parody) of the planner's rationalising role: to set up structures, and then to stand back as accretion, in this case crystalline rather than experiential, takes place.

The winking, shifting facets of copper sulphate take on contradictory meanings, their opposites buried within them as the uncanny hides within the homely. In their hostile aspect they bristle from the walls and taunt us like an overwhelming host of accumulated experiences, a manifestation of what the anthropologist Daniel Miller calls 'the house as an abode of history'.5 Yet in their cold, inorganic aspect they do not display but rather insulate us from that history, and here the meanings dislocate again: this insulation could either be taken as an imposition - white noise obliterating a message from the past - or as a reminder of the proper distance necessary to afford respect, and to avoid a collapse into easy nostalgia and sentimentality.

It is worth noting that this project was commissioned by Artangel, who also allowed Rachel Whiteread to cast her 'House' (1993). Both Hiorns and Whiteread's sculptures arrest the most human of spaces in inorganic solidity, and both operate on sites which are bound for destruction and demolition. The locations of both sculptures, in economically deprived areas of London, also bring out other, more uncomfortable implications: the material otherness of the works, seen through the prism of a society with wide disparities in wealth and opportunity, could be seen as exoticising these spaces and the lives they contained. Indeed, the viewers of Hiorns's work are placed in positions reminiscent of power - booted and gloved like emergency services or forensic scientists and authorised to enter another's domestic space, as in the wake of a disaster. On a literal level, that disaster could be seen to be either the original, flawed utopian project, or the contemporary decimation of social housing stock amidst the fanfare of regeneration.

A deeper sense of the disastrous, of lives overtaken, lends 'Seizure' the atmosphere of a monument, as if some great Titanic had sunk here, and was now only to be apprehended through the grotesque distortions of accumulated marine life. The question 'what happened here?' drifts, if we allow it, beyond the forensic realms of psychoanalysis, sociology or archaeology, and becomes a meditation on the absence at the heart of all communication. Hiorns's intention may be anti-transcendent, and focused on the material specificity of his medium but, like the growth of crystals, the meanings of this work proliferate and spread from the points of its dislocation. 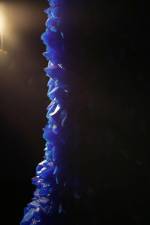 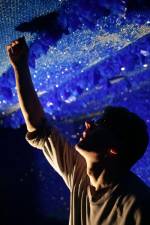