The linguistic games of Take Care of Yourself, a highlight of the Venice Biennale in 2007 are now the centrepiece of Sophie Calle’s first UK retrospective at the Whitechapel Gallery

Sophie Calle’s art practice is the stuff of fiction. When she found an address book on the street and invented a biography of its owner based on accounts of his friends in a series of articles for the newspaper Libération, Calle inspired the American author Paul Auster to sketch a lightly veiled portrait of the French artist in his 1992 novel Leviathan: ‘Some people called her a photographer, others referred to her as a conceptualist, still others considered her as a writer’, says the narrator. But in truth she could not be pigeonholed. ‘Her work was too nutty for that, too idiosyncratic, too personal to be thought of as belonging to any particular medium or discipline.’1 Calle documents intimate moments of revelation with image and text; she looks at the messiness of emotions and how we attempt to define them through language and gesture. The artist shares journals of random encounters with passers-by in New York and Berlin, an awkward exchange with a Russian on the Trans-Siberian railway, and a journey following a stranger to Venice. This utopian impulse rises to the surface in the linguistic games of ‘Take Care of Yourself’, a highlight of the Venice Biennale in 2007 and now the centrepiece of Calle’s first UK retrospective at the Whitechapel Gallery.2 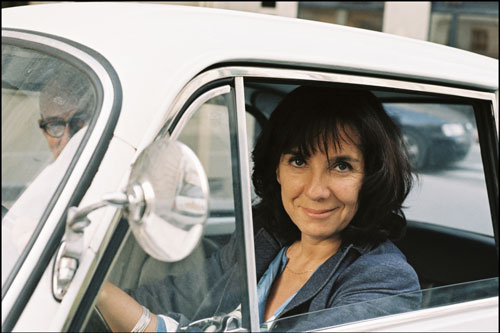 On walking into the exhibition, the visitor is surrounded by this multi-media installation, where 107 women deconstruct an email in which the artist finds herself dumped by an ex-boyfriend. An actress, a dancer, a singer, a psychiatrist and an anthropologist join this experimental sisterhood. The women’s insights into relationship breakdown are poignant and light-hearted by turns: a ballerina delivers an elegiac recital whereas a composer produces uplifting music. One woman digests the letter silently while sitting on a bench amid an angry, colourful street protest. Words hold the strength of actions in translations of diverse forms of written language: SMS messaging, a newspaper headline, a lexicometric analysis and the lyrics of a ‘subway song’. By adopting an experiential approach refined through literary theory, Calle transcends the initial trauma of the rejection and creates a warm, participative artwork. This ability to draw meditations on universal concerns of life out of personal turmoil can further be seen in Calle’s film of her elderly mother dying, Couldn’t Capture Death (2007), situating the viewer at the bedside of the terminally ill woman, while caregivers nurse her through the final moments. Close by is a wall text portraying her consolations of looking at the sea, reading Ravel and listening to Mozart, as her final word ‘Souci’ hovers on a number of black voids – an abstraction of the sad demise, imperceptible on screen.

This narrative arc is propelled by a fictionalist strategy whereby Calle initiates performances from within the realms of her own experience to pursue the utopian ideal of a connection between art and life. In the late 1970s, she picked up her camera to follow strangers across her home city of Paris, and catalysed her fascination with realising unpredictable encounters by inviting a number into her bed in The Sleepers (1979) – which attracted a critic’s attention and brought an invitation to collaborate with the Fashion Moda Gallery of the South Bronx in 1980. There she directed her gaze towards the social interstices of an area blighted by homelessness, unemployment and crime soon after New York State’s bankruptcy. ‘Right away I stumbled upon a simple idea: playing with the fear created by that neighbourhood and the ghetto aspect. I stopped passers-by and asked them to take me wherever they wanted.’3 Through a pact of trust, she allowed her guides to design the project, selecting sites of memory for her to photograph and frame with narrative: a green park for being close to nature, a street bridge for its childhood escape route, land blessed by the Pope for its promise of development – and a derelict home. In the face of absence, its former inhabitant reveals a need for hope in a hostile environment where, ‘when a white person comes to the neighbourhood, it is either a policeman, a dope peddler or it is a mistake.’4 The risk is symbolised by a meta-text of graffiti, a reminder of an unexpected intervention on the day the artist set up the exhibition: ‘Someone broke into the gallery that night and covered the walls with graffiti, floor to ceiling. Including my pictures. It was much better.’5

By discovering artistic value in chance events of ordinary life, Calle displays parallels with the Situationists, who, as Nicolas Bourriaud observes in Relational Aesthetics, follow a concept of construction, ‘intended to replace artistic representation by the experimental realisation of artistic energy in everyday settings’.6 This psychogeographic route to art production emerges in Gotham Handbook (1994), which derives from a set of instructions that Auster gave Calle when approached to invent a character she might resemble. His innocuous directives include beautifying a little spot in the city, such as a street corner, a subway entrance or a tree in the park, helping the homeless and talking to strangers. He advises her to smile at the people who visit, talk to them wherever possible and if you run out of ideas, turn to the subject of the weather: ‘It is a sign of good will, an acknowledgement of your common humanity with the person you are talking to.’ As her locus, Calle selects a phone booth, decorates it with flowers, sweets and a notepad, and sprays on the word ‘Enjoy’, as seen in a photograph accompanying a written record of her achievement: ‘Results of the Operation – 125 smiles given for 72 received… 154 minutes of conversation.’7 It is a work of fiction and a humorous anthropological investigation, revealing through image and text how most dialogue takes the form of platitude. But as Auster observes, the character of ‘Sophie Calle’ makes people happy, and the same holds true in real life. By facilitating the extraordinarily positive responses of actors in her performances, the artist points the way to an ethical code of living, which might ameliorate the social deprivation inherent in the modern condition.

2. ‘Talking to Strangers’ is on display at the Whitechapel Gallery, London (16 October 2009–3 January 2010) and travels to De Pont Museum of Contemporary Art, Tilburg (16 January–16 May 2010). It is accompanied by the publication Sophie Calle: The Reader, which includes an introduction by Iwona Blazwick and texts by Jean Baudrillard, Rosalind Krauss and Robert Storr, among other leading critics and theorists of Calle’s work.

7. Sophie Calle, Gotham Handbook, 1994. This was the final element of ‘Double Game’, in which Calle presented a selection of episodes that Auster borrowed for his book Leviathan (1992) at her exhibition at the Camden Arts Centre (14 November 1998–30 January 1999). 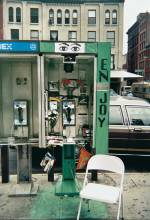 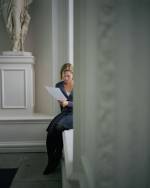