Collection Sandretto Re Rebaudengo: Have you seen me before?

Collection Sandretto Re Rebaudengo: Have you seen me before?

Patrizia Sandretto Re Rebaudengo has enjoyed the status of one of Europe’s most prominent collectors of contemporary art since acquiring her first Maurizio Cattelan work in 1996. 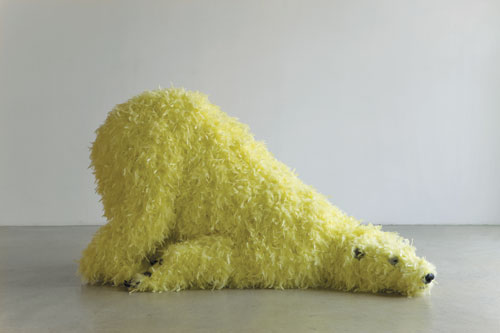 This past year has seen the Whitechapel Gallery share some of the highlights of her collection, otherwise rarely publicly seen, in four neatly curated quarterly displays. Following on from A Love Meal (19 March–9 June 2013), which focused primarily on 3D works, Have you seen me before?, the fourth and final display, contains considerably more 2D works, a couple of sound pieces, and a whole host of glittering names: it’s almost like roll call for contemporary art’s A-stream.

The gallery is framed by a dialogue between two black and white “dot” works hanging at opposite ends of the room. Tauba Auerbach’s Crumple VII (2009), a dizzying mixture of Bridget Riley-esque Op art and those magic eye pictures I never could make work when I was at school, stares across at Thomas Demand’s Paneel (Peg Board) (1996), a similarly creamy background peppered with smaller black spots. These circles and dots are echoed in 3D as well by the bright primary-coloured spherical objects constituting Angela Bulloch’s Yellow Corner (1993) and Anish Kapoor’s 1000 Names (1983). Bulloch has taken two yellow Belisha Beacons, used to demarcate pedestrian crossings where no traffic lights are present, and placed them at eye level, on either side of a corner, so that they touch. Flashing on and off alternately, they seem to be deep in conversation, not only with one another, but also with Kapoor’s looming red-pigmented balloon, gazing down from an interestingly counterposed height.

All this geometric and abstracted conceptualism aside, what really grabs the visitor’s eye in this display is Paola Pivi’s lolling polar bear, the 2008 work from which the title of the show has been adopted. An ostensibly recognisable creature, this Baloo-like bear is cuddly and endearing: bottom in the air, and head to the ground, with drooping eyelids, which make you want to lie down on the gallery floor and snuggle up next to him. However, as you approach, you are forced to look again: the polar bear is covered in yellow chicken feathers! With this curious and unexpected twist, Pivi conjures up an incongruous, dreamlike and topsy turvy world, much like Alice’s Wonderland.

This feeling of not quite being in reality is compounded still further by Katharina Fritsch’s oversized Table with Cheese (1981) and Giuseppe Gabellone’s Periodo (1997), a photograph of a spiral staircase, standing alone in a dusty concrete space, leading to nowhere.

Tying all of these works together is Philippe Parreno’s Jean-Luc Godard (1993), an installation piece consisting of an artificial Christmas tree hung with fairy lights, teddy bears, and baubles (nicely picking up on Bulloch’s and Kapoor’s globes, whilst also invoking the renewed sense of wonderment that the festive season always brings), surrounded by blue canvas chairs on which the viewer is invited to sit and listen to a 45-minute accompanying soundtrack. Delivered via an old-fashioned cassette recorder, this offers a mocked up monologue by the French-Swiss filmmaker, scripted by Parreno, musing on the state of today’s popular culture and society. In amongst the ramblings are nuggets of insight, including, most resonantly, a warning not to believe in all that we think we are seeing. Indeed, the call to look twice and question what is before us reverberates throughout this comically uplifting display. 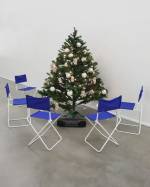 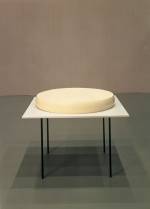