The Unilever Series: Miroslaw Balka, ‘How it is’

The Unilever Series: Miroslaw Balka, ‘How it is’

Miroslaw Balka has created an environment, a work using light-absorbing material across the walls of a storage container, for the purpose of experiencing darkness 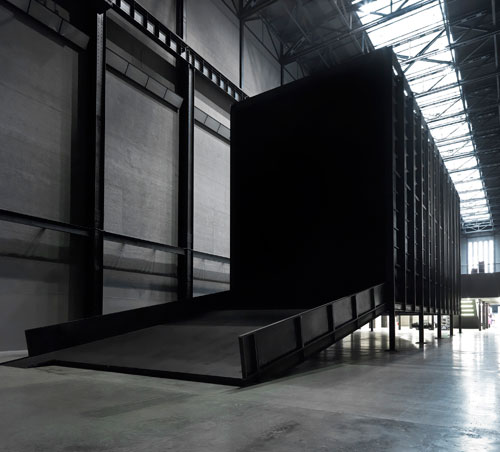 The Unilever series are commissioned works whose proportions bear a relation to the space in which they inhabit: the gargantuan space of the Tate Modern’s Turbine Room. As a consequence, the pieces produced within this space are on such a scale that they can be considered environmental: one’s engagement with these pieces is not so much a relation whereby the viewer looks at the art-piece, but rather one where the viewer is subsumed, sensorially speaking, within the space created by the artist. This type of experience goes beyond the video or light-projected installations often seen in smaller gallery spaces. 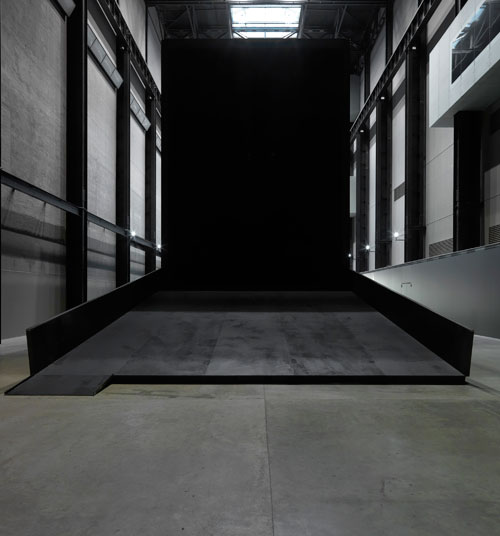 This has certainly been true of the past works from this series, which include Olafur Eliasson’s The Weather Project 03/04, a piece consisting of a illuminated semi-circular disk at the far end of the room, a mirrored ceiling reflecting the activities of spectators, of artistic events, including the Merce Cunningham Dance Company, and a mist generator which creates an interposing hazy blanket between the disk of light and the viewer; Doris Salcedo’s Shibboleth, a singular work consisting of a crack (the type of crack that might be seen after an earthquake) in the floor running the full length of the Turbine Room; and Anish Kapoor’s large trumpet-like form consisting of three steel rings joined by an expanse of PVC. 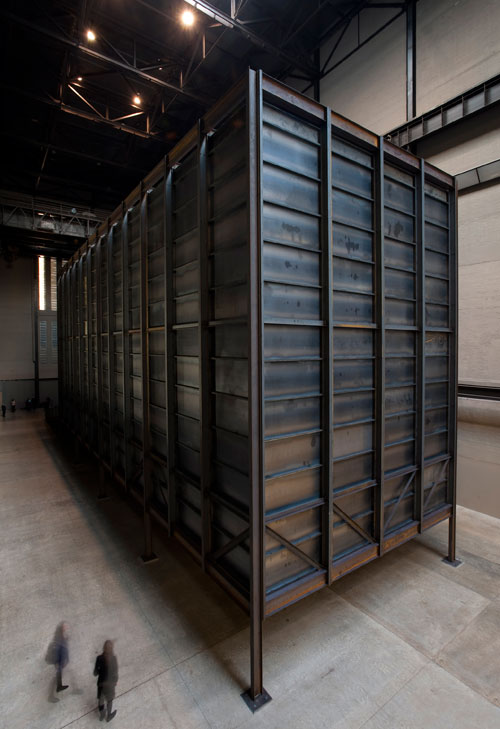 The current Unilever artist, Miroslaw Balka, has also created an environment, but instead of creating something visual, or even visible, he has made a work using light-absorbing material across the walls of a storage container, for the purpose of experiencing darkness. How it is (2009) is an empty container running about half the length of the Turbine Room, and with the height of cathedral proportions. You enter the space by moving up a ramp and into the container, and as you walk into this space, you see a vast and dense field of impenetrable blackness ahead. As you plunge into the darkness you momentarily find yourself unable to see, although arguably you might be said to perceive darkness. You can, however, feel the sides of the container, and experience those sides to be of a soft material. And you can hear the sounds made throughout the space, as well as those produced in the Turbine Room. By denying, or reducing, the viewer’s visual perception, this piece, in effect, enhances the observer’s auditory awareness. At the far end of the work you are in a position to benefit from the full effects of the darkness, if you remain with your back to the entrance. It is at this point that you can experience the sounds most fully, as when they reflect off the container’s surface; and you become aware of the sharpness of the echo and the relation between the staccato sounds heard within the container and the softer and more reverberant sounds produced outside of it. 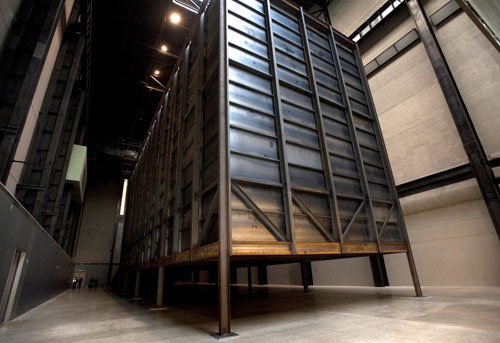 If Balka’s work sets out to question what it is to perceive darkness, then we might want to explore the idea of what it is that we are engaged in: toward what are we attending? We might want to say that we cannot perceive an absence, in so far our notion of perception rests upon our being acquainted with some sensory feature; of being in receipt of objects in virtue of the conditions by which the seeing is made possible: the means by which objects are illuminated. If the conditions are such that no light is present in the environment, then there are grounds for thinking that perception cannot be said to take place. We perceive objects and their sensory features, but it is questionable whether we perceive, in any direct way, absences. There are those philosophers who would ask: can we be said to be seeing the absence of light? And further: if we claim that we perceive darkness, in what way might we distinguish this kind of perception from an all-out privation of vision, i.e. of the quality, if it is to be called that, of blindness?

The philosopher David Lewis sets out the ambiguities with respect to this problem when he writes:

… in the pitch dark, we find out by sight that it is dark. How else – by smell? By the very fact that we do not see? – No, for we also do not see in dazzling light or thick fog, and it is by sight that we distinguish various situations in which we do not see. In a sense, we do see in the dark when we see that it is dark. In a more common sense, we never see in the dark. There is an ambiguity in our concept of seeing …
(Lewis, 1986, 283)1

In the case of Balka’s piece, the experience of darkness wanes as we adjust to the environment, gradually becoming aware of people and walls and even faint shadows. We see because there is light enough for us to see. And when we turn to face the entrance, we perceive more detail still. Experiencing the darkness of Balka’s piece is only achieved when entering the space. In respect of the question raised about the nature of darkness, it might have been more apt to have titled the work, ‘How it is not’. 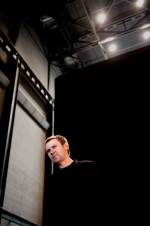