“In another moment Alice was through the glass, and had jumped lightly down into the Looking-glass room. […] Then she began looking about, and noticed that what could be seen from the old room was quite common and uninteresting, but that all the rest was as different as possible.”1

Kapoor, who represented Britain at the Venice Biennale in 1990, won the Turner Prize in 1991, and was the first living artist to be given the entire Royal Academy main gallery space for his 2009 show, attracting a record 260,000 visitors, is renowned for his use of vivid primary colours in pigment form: “Colour is stuff. There’s a thing-ness to colour.” Then, of course, there are his mirrored surfaces. The title of one of his earliest such works, and the first to be seen upon entering the main gallery, Turning the World Inside Out (1995) might, indeed, be argued to sum up his oeuvre.

A side room houses a further three mirrors, collectively Her Blood (1998), one tinted a deep red, producing a liquid reflection as if it were a pool of blood. Optically unsettling, its two silver companions, one composed of concentric circles which seem to spin as you walk across its field, flip you upside down, compress you to squat height, focus, un-focus, and multiply your image, beyond the realm of any hall of mirrors.

Seemingly calmer, but equally disconcerting to the eye, When I am Pregnant (1992) swells silently from a wall, invisible head on, except for a vague shadow demarcating its presence. An interplay of shadow and light on curves, suggesting there is no such thing as pure white.

This is the stuff of dreams and nightmares, an encounter with the sublime. If, as Kapoor contends, art should be about going where you don’t know, and leading the viewer somewhere he doesn’t know either, then this exhibition truly is a journey to the other side of the looking glass, entering a world of distortion and inversion, where even the familiar seems bizarre. 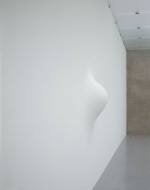 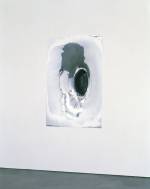 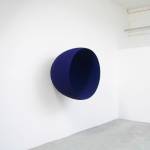