In his preface to the catalogue for Poussin Gallery’s current exhibition, High Abstract, Mel Gooding is keen to establish that, “a simple definition of what might be admitted under the rubric of ‘abstract’ has never been agreed by artists or by critics or by art historians.”

Nevertheless, with signs of a resurgence of interest in this genre, and as the result of a series of conversations bemoaning the paucity of shows, discussions, and sponsorship, the Poussin director, Robin Greenwood, an abstract painter and sculptor himself, and John Pluthero, an art collector and the chairman of Cable and Wireless, have founded abstractcritical, a not for profit initiative aimed at providing a forum for debate, with live and on-line critical discussions and salon events, sponsorship for exhibitions, and, later in the year, the abstractcritical newcomer awards, both for artists, and also for writers.

“Art is a very lively activity and it lives in the discourse around it,” Gooding asserted, as chair of the inaugural panel discussion held at Goldsmiths on 22 February. “Painting is itself a philosophical activity, a non-verbal activity, which leads to the necessity of applying a language to it.” But does this not contradict the very nature and goal of abstract art, namely to produce work which eludes the order of thought and which, in contrast to the figurative, engages the viewer first in seeing (the involuntary experience of the sign, enjoying the media and colour for what they are, and not for what they represent), and only then in looking (the cognitive recognition of the signified)? This is, perhaps, an oversimplification and false dialectic, since cerebral pre-planning and raw spontaneity need not necessarily be mutually exclusive.

“Every decision [made by the painter] is a critical decision. But that’s a different kind of critical decision from trying to make references or allusions.” An artist might use quite deliberate images in quite an abstract way. Indeed, panellist and artist Katie Pratt maintained that abstraction, for her, has a very specific linguistic structure and lexicon which, to a great extent, is provided by its history and theory, “the substance of which,” according to abstractionist Alan Gouk, “comes from what artists themselves have said.” The three progenitors of abstraction, Wassily Kandinsky (1866–1944), Piet Mondrian (1872–1944), and Kazimir Malevich (1879–1935), were most articulate about their art and ideas, and, through this, they opened up a discourse about the direction of painting and the development of new forms of art in the 20th century. Early modernist ideology, as espoused by its pioneers is the starting point for abstractcritical in an attempt to define abstraction in the 21st century. 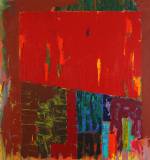 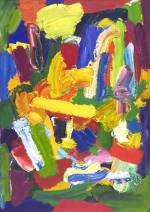