Offsite exhibition by Four Square Fine Arts at The Gallery in Redchurch Street, London
24–29 May 2011

Ellen Bell’s work has all too often been side-lined as craft rather than art, and, indeed, the painstaking methods by which she selects, cuts, pins and pastes sometimes minutely printed words and strings of text from dictionaries, plays, and novels, requires a most artisanal skill and precision. It would, however, be a mistake to pigeonhole the resulting works as purely decorative. Potent, intelligent, and moving are more appropriate words to describe her work, and reflect the artist’s intent.

The scale of her solo show, Camera Obscura and Other Stories, held, sadly just for one week, in the heart of trendy Shoreditch, is eye opening: mocked up dictionary pages, newer, larger, more abstract series, and a core body of figurative images, the templates for which were taken from old photographs, then “fleshed out” with words, carefully selected and composed into sometimes quite dark narratives. The photographic element provides a series of snapshot memories, captured moments in time, family history, but the superimposed narratives call this sentimentality into question, the undulating words and their shadows obfuscating the events and people depicted.

The largest works in the show, which confront the visitor with single words, taken from trashy romance novels, floating upon bold red, black, and white backgrounds, form the Night Murmurs series, Bell’s most abstract to date. This began with her wanting to talk about what it’s like to hear something in the dark, something intimate, something belonging to someone else. Repeated phrases, terms of endearment, the cry of “yes, yes, yes!” – here the idea of a camera obscura – a dark chamber – is taken literally.

The inclusion of Bell’s sketchbooks both elucidate her way of working, but also make one even more curious about the mind of this woman who, regardless of stylistic shift, steadfastly retains her career-long theme of intimacy, so much so that she is undertaking a practice-based PhD in the subject. But Bell is keen not to divulge too much of herself. Whilst it is essential each piece should have a resonance in her own life, it is not for the viewer to know what – not because she is protecting her privacy, but because she doesn’t want to impose her own story on works, or to present a finished narrative: “I’d rather not tell you too much. You tell me your stories. I give something away by my choice of words, but I’m asking the viewer to do the work.” Indeed, to fully appreciate the intricacies of Bell’s work, one must put in some effort, taking the time to read and to find the interlopers in an image seemingly comprising just one repeated word. But when one does, abandoning “self” to a stream of consciousness, to personal associations, the effort is greatly rewarded. 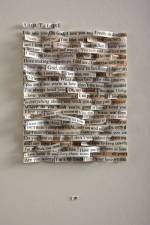 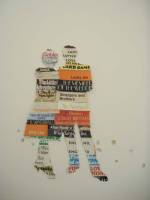 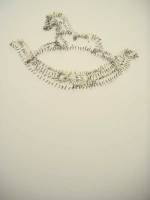 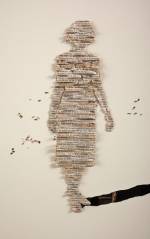