Louise Bourgeois, Tracey Emin: Do Not Abandon Me

Louise Bourgeois, Tracey Emin: Do Not Abandon Me

When French-born American artist Louise Bourgeois handed over her set of 16 gouache male and female torsos to younger British artist, new friend and “kindred spirit”, Tracey Emin, giving her free rein to add to them as she wish, she told her “don’t worry, there is lots of time”. Emin took her quite literally, carrying the unfinished works around with her, as far as Australia and back, as she built up the nerve to tamper with something she already found quite beautiful and was fearful of ruining.

Some 18 months later, the prints, now bedaubed with scribbled foetuses, miniature female figures, and heart rending words in Emin’s trademark mirror writing, finally arrived back with their Ur-mother, to be greeted with claps of approval and the utterance “yes, yes, yes”, by sheer good fortune, just three months before her death, in May 2010, at the grand old age of 98.

Having already shown in the Carolina Nitsch Project Room, New York, this vibrant collaborative output now adorns the walls of the Old Masters gallery at Hauser and Wirth Colnaghi. With the foliage pattern on the dark red walls mirroring the bleeding watercolour nerve endings of the works themselves, one gets the impression of standing in an oversized womb. The raw images, despite erect phalluses and inscriptions such as “You kept fucking me”, express not so much themes of overt sexuality and eroticism, but rather the intimate feminine emotions concerned with love and loss (the title of the show being Do Not Abandon Me), life and death, birth and motherhood, or the absence thereof (Bourgeois was a mother of three; Emin has had two abortions, and now, nearing her half century, accepts that she will never have a child). They exemplify and unite both artists’ confessional and audaciously autobiographical styles.

Before meeting Bourgeois for the first time, Emin had spent years mulling over what she really thought about the older artist’s work, and what it was that made it so good. Her conclusion? “Because of the honesty.” Then, upon entering her flat to find her “screaming, shouting, angry, and shaking her fist, […] I just remember thinking: this woman’s free. But the irony was that even though this woman was being emotionally free, she was making reference to the emotional entrapment of her life.” On one colourless pregnant bulge, I just died at birth, Emin has given a voice to an aborted foetus: “I now know I am free. Free to leave this world with no sentimental trail.” Just how appropriate these words might have been for Bourgeois herself one can only conjecture, but the affinity between birth and death resounds, akin to an epitaph. 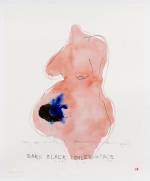