“Somehow at some point we begin to create our own biographies from the things we own or possess.”1

Since emerging from Goldsmiths at the beginning of the last major recession, Michael Landy has pursued particular themes across a sequence of big projects. Their coherence is compelling: “Worth and value are all wrapped up in what I do.”2 A fragment from the early sculpture, Market (1990), comprising a market stall collapsed into its basic parts, had a niche setting in last year’s Frieze Art Fair, and still stands, 20 years on, as a pithy response to economic failure. Now in the South London Gallery, Camberwell, Landy is making an open call for artistic failures to be turned over to landfill. Art Bin (2010) confirms that his biography owes as much to what he has destroyed as to the items he has accumulated.

A 600m3 skip, bolted together from transparent Perspex panels, fills the gallery, and over a two month period will serve as a shared depository for things that are deemed by Landy to be not worth saving. The system is efficient, with applications processed through a dedicated website, and beyond other explorers of waste in visual terms – from Baldessarri’s de-cluttering instinct to Christian Boltanski's Personnes currently on show in the Grand Palais – it also brings to mind the dust-yards of 19th-century London, a precedent in organised waste management. Accordingly, in his preoccupation with identity, Landy appears as something of a John Harman figure, to-wit the personal cataclysm of Break Down (2001) where he systematically destroyed all his belongings and generated 5.75 tonnes for landfill. Having since suffered serious illness, Art Bin points to life-writing as an ongoing rather than retrospective activity. “When I had cancer, the thing that really annoyed me was not dying, really; it was more about thinking, ‘What about all the work I haven’t made yet?’”3

Darkly humorous, in Art Bin Landy has gone on to enliven that commonplace, “negative space”. On the opening night, the gallery filled with a smell unexpected from the conceptual – a workshop smell, of sawdust and paint. A couple of gallery hands went up and down a set of stairs, throwing artworks over the tipping point. Their costume of black T-shirts and white gloves conformed to museum etiquette but, given they were handling things about to disappear into oblivion, also gestured to mime artists in warm up.

Landy’s projects are difficult to commodify, and set him on an elliptical orbit from the yBa phenomenon, which is well represented in Art Bin. A tottering pile of sculptures that Gary Hume has been making from clusters of his old paint pots for years, and not showing, landed with a wallop, to cheers. They joined a drawing of the Scottish flag by Tracey Emin, a set of Ian Davenport stripes on metal sheets and a big pink painting by Michael Craig-Martin. Damien Hirst’s glittery screen-print of a skull on canvas has been biffed above the nose hole, and keeps company with a stuffed dog, a golden exercise ball, some wooden splints and other tat. The bin does away with hierarchy, showing celebrated and unknown artists alike, one on top of the other, in the way that newspaper layout collides one story with another. Indeed the life of this project is fanned by public outreach, and Landy draws on the history of rubbish in art to provide the bait for newspaper coverage.4 A newspaper-style publication to accompany the event reproduces clippings that locate Art Bin within a history of news stories: “What a load of rubbish” (The Daily Mail on Carl Andre, 16/2/76); “Modern art is rubbish – and confusing for Tate cleaner,” (The Independent on Gustav Metzger, 27/8/04); “Churchill portrait destroyed” (The Times, 12/1/78).

One of Landy’s own drawings on the pile serves as an index to the whole conceit. A scrap from his last project, H2NY, lately shown in the exhibition Joyous Machines (Tate Liverpool, until 10 January 2009) pays homage to Jean Tinguely, and specifically, his self-destructing artwork, Homage to New York. Tinguely’s machine was made from a haul of junk – a bathtub, drums, bottles and bicycle wheels – and designed to demolish itself in front of an audience on 17 March 1960. In the event, the machine “failed to fail” and had to be extinguished by a fireman. Landy aims to complete Tinguely’s masterpiece, and has created over 160 black and white drawings of the machine, give or take the duds. In an imaginary interview, Landy summoned Tinguely in a New Jersey dump: “I read somewhere that you said, ‘those whose jobs it is to destroy are often happier than those who have to build.’”5 The drawing in Art Bin continues that conversation.

It’s unusual to hear whoops and laughter in a gallery or a tip, but Art Bin is a joyous spectacle. In Scrapheap Services (1995), Landy filled the Chisenhale Gallery with thousands of cutout figures and mannequins posing as a corporate cleaning company. This was a raw political tableau, biting at the legacy of the Thatcherite government, whereas Art Bin brings a more positive inflection to waste-generated discussion, and invites a convergence between artistic and social practices. The artist’s private editing process is turned into public confession, not far from feeding time at the zoo. The experience unfolds in a dramatic arc: the climb to the top, the literal action of throwing an object away, the noise of the impact, the “oos” and “ahs” at floor level. “One perverse, unforeseen result of the conceit”, Landy observes, “is that there are lots of people queuing up to be in the Bin, eager to be in the bin. If you're not a ‘name’ artist, this could be the first rung on the ladder, so that you embrace failure as a route to success.”6

I had the gratification of getting my failed artwork approved for submission. Behind a desk at the back of the gallery, superintending proceedings, was Landy himself, as Ade Edmondson-cum-factory manager. He checked off the item against its logged number, attached a label to the back and filled out a receipt. I climbed the stairs, gazed into the abyss and hurled my paltry thing as far as I could. It smashed against the side – the Perspex shuddered and so did I, realising that my mistake was now trapped in public. There will too, I suspect, be an afterword. At the bottom of the receipt there’s a disclaimer for reproduction of the trashed artwork. Just as Landy created a unique taxonomical self-portrait when he catalogued those 7,227 possessions destroyed in Break Down, so will the Art Bin inventory make for rich pickings. 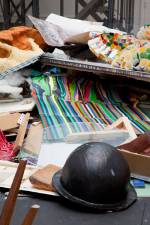 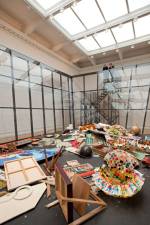