The Whitworth Art Gallery, The University of Manchester
19 February–12 June 2011 by ANNA McNAY

There is a lot more to Mary Kelly’s work than just dirty nappies. Nevertheless, no retrospective would be complete without the inclusion of Post-Partum Document (1973–1979), notorious for causing a ruckus in the British press when exhibited at the ICA in 1976. Indeed, it is the idea of a document which best encapsulates Kelly’s work as a whole. The large-scale narrative installations, or projects, a comprehensive selection of which are on show at the Whitworth Art Gallery until mid-June, not only capture the moment at which they were made, the time which they represent (not always contemporaneous, as in, for example, Habitus (2010), a structure based on the Anderson Shelter, and “corrugated” with texts relating to memories of those born during or after the Second World War), but also resound as both historical and contemporary memories.

Described in her own words as “a kind of parody of museological display”1, Post-Partum Document has been dubbed “the definitive artwork on motherhood”. Certainly Kelly’s works explore themes of femininity and female identity, in the roles of mother, artist, and (middle-aged) woman, but she has long argued against a category of “feminist art”, indeed meeting resistance from some staunch feminists for her refusal to celebrate or even depict the female body. Kelly chooses instead to work with words and objects (items of clothing, hand prints), themselves indexical signs, to build up intergenerational discourses, exploring and exploding the multifaceted psychosocial construction of womanhood. Her work is about the passage of time and cycle of generations, permeated, as these are, with changing identity, growth, loss, return, and reappropriation. Multi-Story House (2007), for example, a transparent structure lit from inside, juxtaposes comments, cut into its panelled walls, of students in the 1970s with those of today, calling into question what, if anything, is passed from one generation to the next.

Critical to Kelly’s work is the role of language as a symbol of authority. Post-Partum Document ends when her child commences school and writes his own name – a moment of separation, marking his entry into the patriarchal realm: “At that point, in a way, he’d become the author.”2 In uncomfortable contrast to this story of her own child, The Ballad of Kastriot Rexhepi (2001), tells the tale of an infant separated from his family during the Balkan war. The tale concludes with reunification with his parents, and his utterance of the Albanian word for “father”.

Kelly uses words as others might use paint. She collects voices as found objects, and reformulates them in light boxes, mirrors, sculptures, etchings, and even embossed on to tumble dryer lint. Her work consciously blurs the boundaries between the individual and the collective, thus truly bringing home the motto, intrinsic to feminism’s founding moment, that “the personal is political”.

2. Mary Kelly in conversation with Ian White, published as The Body Politic, in Frieze magazine, on 5 May 2007. 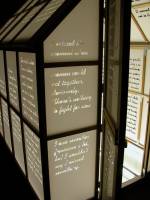