Relatively unknown inside of Britain, the British Council in fact plays an extensive role in nurturing and bringing to attention native artistic talent. This is achieved through numerous means including grants, exchanges, and exhibitions, the last of which are facilitated by its even less well-known art collection. Comprising over 8,500 works acquired since it’s inception in 1935 (a year after the foundation of the Council itself), the collection is in fact rivalled only by those of Tate Britain and the Arts Council in the extent and quality of its holdings of British art from the last hundred years.1 Taking the 75th anniversary of the Council as it’s cue - as well as the opportunity to use space in the recently re-opened Whitechapel Gallery - this is the first of five exhibitions of works from the collection, allowing the collection itself to be displayed and explored back in England for the first time.

Curated by Michael Craig-Martin – himself a recipient of the Council’s support – the pieces collected span almost the whole life of the body, from Paul Nash’s 1934 Landscape of the Megaliths to Alan Kane and Jeremy Deller’s The Folk Archive (2005). Making one’s way to the display is a strange experience, with the visitor forced to negotiate a number of the other eight concurrent ‘exhibitions’ (some consisting of just a few loosely scattered works) currently at the Whitechapel. On a busy day this means reaching Gallery 7 with a mixture of weariness and relief, not just at having negotiated the crowds and rather awkward ‘flow’ of the new building, but at having reached some recognisable paintings amidst the sea of more experimental and unfamiliar art elsewhere.

In the space of a single room one is then confronted with an astonishing microcosm of Modern and Contemporary British art (almost a symbolic heart of the Whitechapel from which much of the other art springs). With little obvious theme to the exhibition, what is immediately obvious is the quality of individual works. Lucien Freud’s Girl with Roses (1947-48) shows his familiar model Kitty in all the eerie, idiosyncratic realism of his best early works, at once very Modern and yet very much of its time and place; “Titian’s fleshy Venus of Urbino is recast for a cold climate of woollies and rations” as the catalogue note puts it.2

David Hockney’s Man in a Museum (or You’re in the Wrong Movie) (1962) is one of his finest works of the early sixties; almost drawn directly onto unprimed canvas the free and colourful use of paint is a witty comment on the act of image making, and the easy slippage between the abstract and representational. The looming Egyptian sculpted figure that dominates the canvas also seems to glance curiously at the museum visitor painted beside, comically reversing their relationship to show the strange interactions with the past that the museum throws out. In the context of this exhibition it also draws attention to the contrasts of the works themselves, the visitor himself staring blankly out of the left of the canvas - perhaps wondering what to make of the earlier yet more abstract works by Nicholson, Sutherland and Passmore under his gaze.

With catalogue in hand the inspiration for the selection is made clearer, Craig-Martin being inspired both by the recording of prices paid for works and by their ‘passports’ or recorded exhibition histories. All the works present are therefore ‘great early buys’ which have been extensively exhibited throughout the world, works having recently travelled back from places including India, Kazakhstan, China and the USA.3 The prices and acquisition dates in the catalogue make for fascinating reading, and highlight that supporting young artists has the fortunate side effect of adding key works to the collection at relatively low costs. Given his recent Sotheby’s sale the purchase of Hirst’s enormous 1994 spot painting Apotryptophanae in that year for £8,500 now seems particularly extraordinary (even adjusted for inflation the amount wouldn’t have bought so much as a small drawing at Sotheby’s).4 Beyond the monetary fascination, however, what is more interesting are the journeys around the world the works have taken. Rather than sitting in storerooms or on rarely glimpsed walls they are constantly moved and displayed, spreading their ideas and creating ever more cultural interactions.

It seems somehow fitting that Ofili’s Painting with Shit on it (1993) has just returned from Africa, where it was on a British Council sponsored trip that he picked up on the ‘sacred nature of elephant dung in the country’ and ‘rich dot technique used in the cave paintings of the Matopos Hills’ that inspired the present work.5 And it is with these multifarious interactions in mind that the exhibition is best viewed, perhaps noting the differing reinventions of landscape in Peter Lanyon’s Bojewyan Farms (1951-52) and Peter Doig’s Hill Houses (1990-91), or those of Englishness in Paul Nash’s Landscape of the Megaliths (1934) and Kane and Deller’s Folk Archive (2005). It is then easy to imagine the multicoloured dots of Hirst’s Apotryptophanae as a gently mocking homage to the whitewashed geometrical circle in Nicholson’s 1935 (White Relief), or to notice how the one straight and one fallen rose in Freud’s Girl with Roses are echoed by the contrast between live and fallen flowers in Anya Gallacio’s Preserve Beauty (2003) installation. One is left wondering what parallels such an exhibition will draw out after another 75 years. 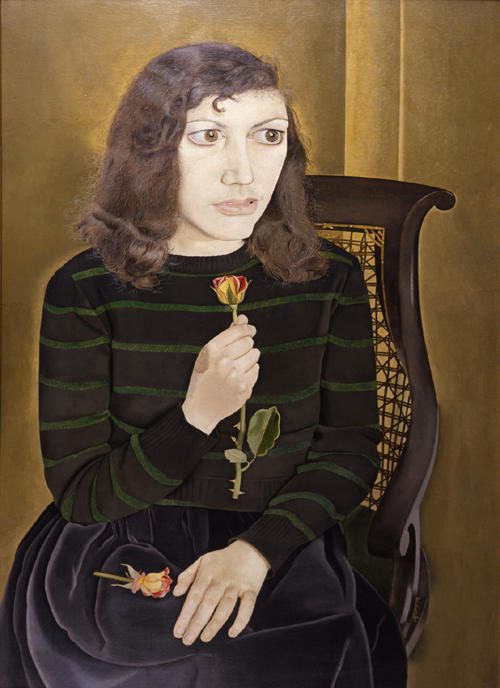 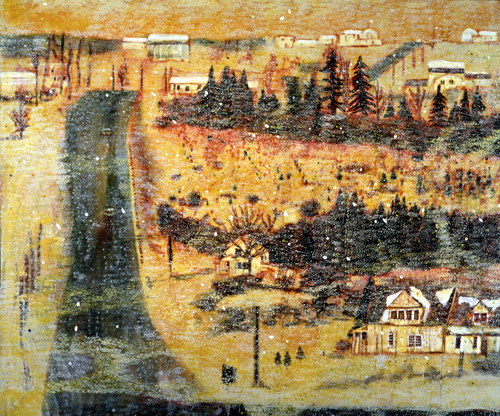 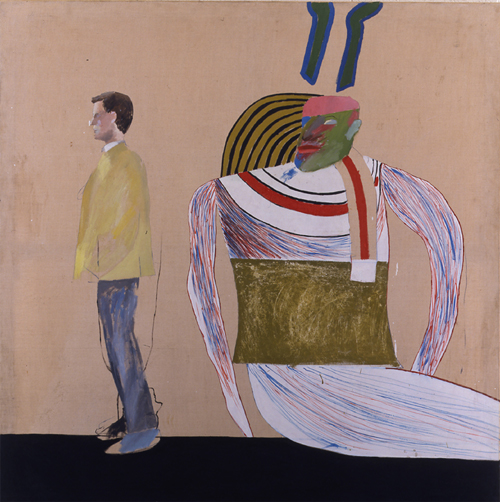 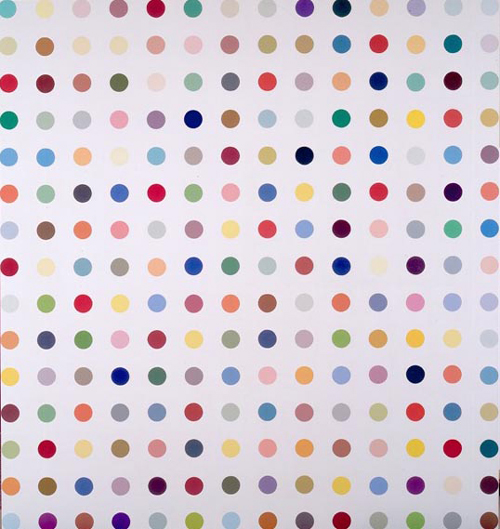 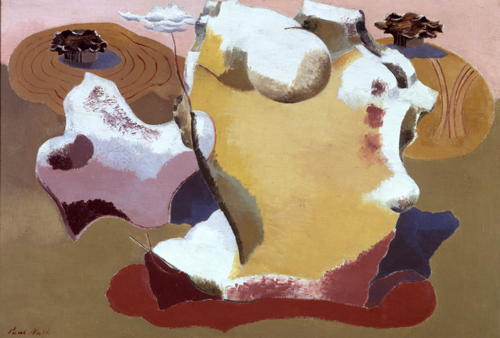 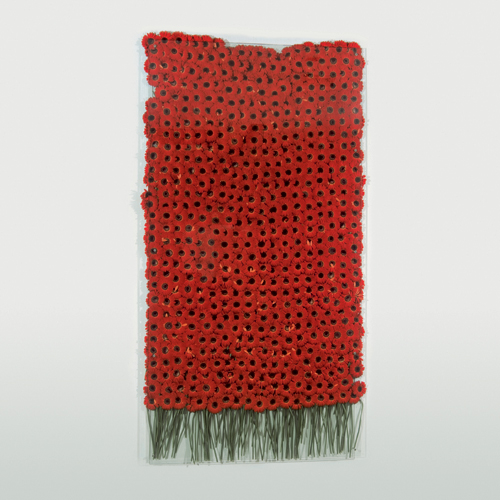 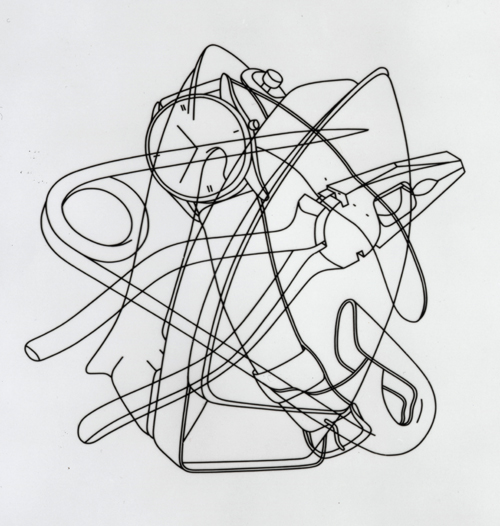 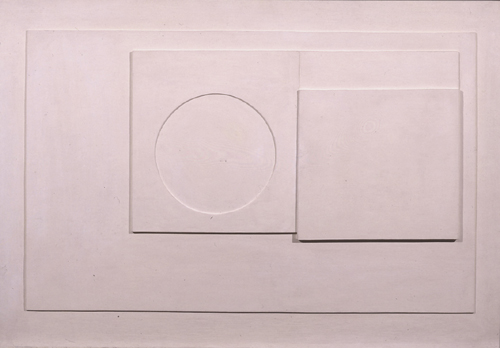 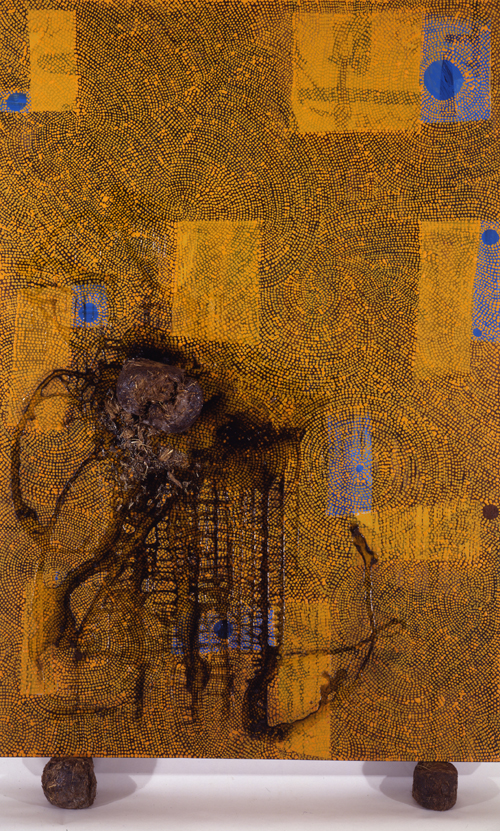