Artists, like everyone else, die leaving legacies and estates, which they hope can safeguard both their living relatives and other beneficiaries, as well as maintain and protect their names and reputations for posterity. Famous estates, such as those of Mark Rothko, David Smith and Roy Lichtenstein, stand out in the public mind, as do the complexities of a case like Francis Bacon's. Then, there are the twists and turns of the artists' galleries and dealers as they seek to secure their own commercial interest in a particular artist. Authentication issues, sometimes becoming thorny once the artist in question is no longer around to verify or deny the provenance of the work, at times result in landmark legal cases. Today, the growth of artists' foundations has established another significant institution ready to fight its corner in the art world. Finally, where publications about the artist are concerned, the matter of royalties can become a fraught issue, with publishers seeking to avoid fees for reproduction rights.

Magda Salvesen, who lives in New York, is the widow of the Expressionist painter Jon Schueler. When he died in 1992, it took her some time to accept that her role had been redefined by fate. Fully engaged in her own academic career as an art and garden historian, Magda realised that she had to become the primary 'curator' of Jon's work outside museums, and she has skillfully balanced both roles. In Artists' Estates, Magda and her Co-Editor, Diane Cousineau, with great dedication and objectivity, have opted to present a whole range of artists' estates for consideration rather than focusing on the specifics of Jon Schueler's example.

Magda Salvesen relates how meeting Betsy Zogbaum at the 1995 Franz Kline show at the Whitney Museum of American Art acted as a catalyst for her project. Betsy's vivid, though somewhat confused, recollections of her intimate relationship with Kline made her aware of how important it was to tape such narratives before it was too late. From artists' companions and widows, gradually, her scope spread to the children of deceased artists, and then to dealers and other art professionals.

The book records various routes that artists and their legatees pursue as they try to organise their estates. It reveals the intricate ways in which dealers such as Leo Castelli (who had been Schueler's dealer at a crucial stage) promote their artists. The description of the inner workings involved in the forging of Barnett Newman's legacy and Robert Motherwell's refusal to grant his widow, Renate Ponsold, a role in the managing of his estate, are sobering. Fairfield Porter's widow, Anne, emerges as a thoroughly generous figure, despite being obliged to pay far more tax than seems just.

The text leads on the tribulations of the Rothko estate through the interview with the artist's children, Kate and Christopher. It also highlights the remarkable achievement of Jeffrey Bergen in safeguarding and raising the value of the Romare Bearden estate, while simultaneously fulfilling the artist's broader, philanthropic intentions of increasing American awareness of Negro art.

This is indeed a remarkable work (one is tempted to say a labour of love) in which a scholarly objectivity has been continually sustained while presenting this world of saints and sinners. The book has been assiduously researched, and Salvesen has been ingenious at steering a path through the potential legal minefield that such a subject entails.

Whether in the United States or Europe, amazingly little has been written to assist the whole class of artists' beneficiaries. Most artists remain innocent of the inherent risks involved in failing to itemise their work for posterity. There is virtually nothing in print in Britain on such matters. The situation is changing, however, with the increased value of art itself. But maybe not fast enough. This work by Magda Salvesen and Diane Cousineau points the way, providing a model of perfect form for future contributors. 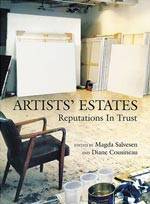