It was only a matter of time before the work of Robert Rauschenberg would again receive a star billing in Paris, and there could be no better venue than the Centre Pompidou. The reason is that the work literally benefits from the implied temporariness of the 'rooms' at the Centre. What France admires in Rauschenberg's work is the greater or less degree of irony that pervades the work, and nowhere more so than in the case of the 'Combines' series, to which this exhibition is dedicated.

Rauschenberg in the USA was always, of course, stepping back from the current trend and critically so: with abstract expressionism he moved as a reaction from white paintings to coloured monochromes, and it was the discreet confidence with which he bared himself to the critics, just as he turned to red paintings, that perplexed them.

Rauschenberg was able to pre-empt the so-called 'Pop' movement by acting as a linking acrobat whom neither abstract expressionist nor Pop art could hold with. His work in collusion with Jasper Johns in the 1950s was the antithesis of that other erstwhile calamitous combination of talents - Gauguin and Van Gogh - and provided both artists with a springboard for future solo virtuosity.

And so to the 'Combine' paintings themselves. What was interesting to the critics, and to other artists, was how Rauschenberg seemed to ride two horses, Sculpture and Painting, without breaking the integrity of either medium. Is there perhaps a surfeit of intellectual and material excess, a comment on the consumer lifestyle then gaining, say, in post-war America? At least that is a European reading of the situation, already laden with clichés. These 'Combines' were always claimed by Rauschenberg, ironically enough, to carry no message other than fingers up to whatever culture (high or low) that would like to appropriate them. A further irony is that from a conservation point of view, the works are still evolving in atmospheric effect - newspaper fades and withers and the wit of the situation is the conservator's nightmare, a whole 'Combine', collapsing and disintegrating.

The famous goat that Rauschenberg came by, and incorporated in works of this time, wandered (as goats do) transitionally from a painting on a panel, suitable for wall mounting, to a kind of floor-based event, having an automobile tyre round the neck and some sort of sticky coagulation of oil paint smeared obscenely down its forehead. In these 'Combines' there is a lot of hanging of items - one a brick, another a ball - and we are almost in the realm of Foucault's 'Pendulum' in terms of calculated but suspended time. Where will it all end? Rauschenberg seems to beg the question. Birds, symbolic species as ever, seem to gravitate in various states of immobility; the stuffed pheasant, the great American eagle and the elegant heron combine to form this aviary of the tamed and the wild. Human ephemera are then drawn from Rauschenberg's own family for convenience and effect. It is almost the equivalent of a small, collapsed French peasant farm, complete with decay to every visible fabric. This is a world close to French sensibilities, by choice, even today - subsistence by the autoroute - and 'zak', a rooster ricochets into the yard.

It is an intelligent and beguiling paradox to find an exhibition of the work of Yves Klein running at the Centre Pompidou at the same time. Is this a subtle curatorial ploy to show how superior the French artist and pioneer of pure colour, 'Klein Blue', could be to the chaotic product of Le Defi Americain as described in the 1950s by the commentator Servan-Schreiber? If so, it too falls flat. Which is not to say that Klein is not 'classical' to good effect, just rather meaningless. One is, if one is French at least, safer treading in Rauschenberg's scintillating world of ironic diversity - but as in the farmyard, be careful where to tread. A wily artist's ironic eye is watching your every move. 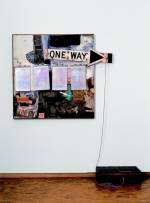 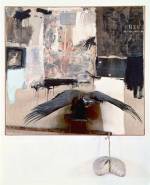 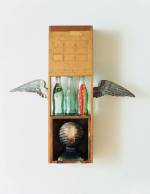 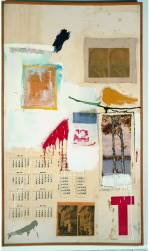 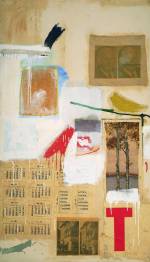 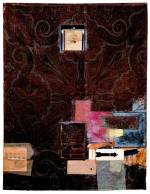 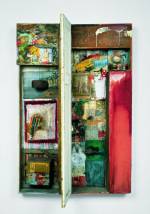 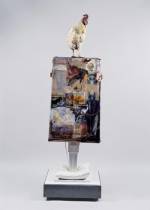 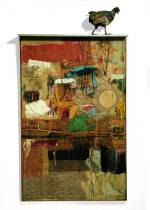 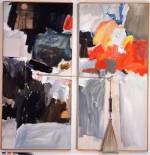 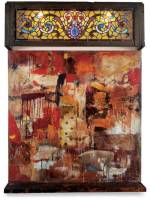