Published by Thames and Hudson, London, 2014

In her book Art and Today (2008), Eleanor Heartney describes the complexity of the contemporary art scene before dividing it into highly readable and concise sections. Her ambitious publication remains an excellent means of connecting with the manifold aspects of contemporary art and culture, often still in flux.

Yet the complex maze that she and others acknowledge, requires an exceptional talent for discerning the dross from the profound: even six years after the publication of Art and Today, there are names, places and significant events and ideas that inevitably are not included. Alistair Hicks’s new book, The Global Art Compass: New Directions in 21st Century Art, indicates the confidence required to pursue an independent path is rare, capturing as it must the constant change in emphases, the ebb and flow of certain artists’ predominance, world events that precipitate new artistic manifestations, and the ability to differentiate between the significant from a passing fad.

Initially, Hicks comes across as somewhat quirky, recounting, as he does, first falling in love, at the age of 17, with Nefertiti in Berlin: “She did not return my gaze, but it did not matter. On the street I might have missed her. She was not what I considered ‘my type’. One ear seemed small, the other elephantine. I could not see her legs. There was no bosom. Her giraffe neck jutted forward … I could not resist the Egyptian queen. I fell for her and gradually realised that I loved art.”

The position of authority held by the art critic John Ruskin in the 19th century in England, or by the American art critic Clement Greenberg in the 1950s and 60s in the US, has long been inappropriate. Hicks has established as his premise the view that no single curator, critic or dealer can, or should, monopolise our view of what is happening in the art world today. Some of the best authorities, the best directors of major museums, the curators who attend every biennale or art fair over decades, rarely write beyond their specialist field, and the nature of their work remit often leaves little time for sufficient reflection to offer an observation that is not merely an amalgam of “art speak”. In the 1980s, Peter Fuller was sceptical about the culture that had thus evolved, empowering those he referred to ironically as the “curatorium”, an international clique of art critics, who mostly, in his view, lacked a sustained critical voice, but who, nonetheless, wielded very great power over artists’ careers, their inclusion in key exhibitions being tantamount to the endorsement of their importance. The relationship between scholarship, art criticism and art appreciation is often vexed and frequently contested.

Hicks’s study, by contrast, is original and wide-ranging. It is a portable book, yet includes more than 150 illustrations; it is a book to read through or to dip in to. As its title suggests, the author employs a diaristic voice to explore an art world where many possible directions exist; the reader is thus empowered to take charge of the global art compass, to personalise it, to decide how to move forward with it, and to develop priorities, expand awareness and insight: “To activate their own innate bearings to the exciting developments in the art world.”

It could easily be little more than an extension of the endless opinionated blogs that have proliferated on the internet, or e-journals that allow people to upload their own contributions, or badly edited (or unedited) copy on artists’ or galleries’ websites. Instead, this is a terrific new contribution to the 21st-century art world, reflecting the author’s wide-ranging expertise achieved through a combination of curating (for Deutsche Bank), and reviewing (for the Times, Financial Times, Spectator and Vogue) underpinned by scholarship (his 1989 books New British Art in the Saatchi Collection and The School of London: The Resurgence of Contemporary Painting and his 2001 publication, Art Works: British and German Contemporary Art, 1960-2000. 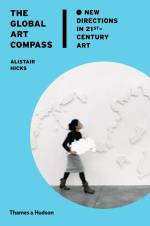