Ink Art: Past as Present in Contemporary China

Ink Art: Past as Present in Contemporary China

In the mid-1980s and 90s, as China distanced itself from the policies of Mao Zedong, and his successors became more willing to engage with the outside world, Chinese contemporary art began to appear with increasing frequency in important international exhibitions. Enthusiastically received, it provided not only memorable images to an art world always avid for the new, but also tantalising glimpses of a society that had been out of bounds for decades, the most captivating of these works an exciting and innovative hybrid of east and west.

Ink Art: Past as Present in Contemporary China at the Metropolitan Museum of Art is an expansive exhibition that surveys the past three decades, with considerably more than half of the 70 works dating from 2000 on. Rather than western influences such as Abstract Expressionism, Pop, Minimalism, Postminimalism and Conceptualism – although they are certainly present – it focuses on the artists’ native heritage, China’s venerated tradition of calligraphy and landscape painting based on brush and ink, which has long been the pinnacle of its aesthetic hierarchy and one of its greatest cultural contributions. The 35 artists selected have grappled with that heritage in their quest to refresh the tradition, using not only ink on paper but more current media such as photography, video, animation and sculpture. Many have an international profile, among whom are Ai Weiwei, Zhang Huan, Xu Bing, Gu Wenda, Liu Wei, Qiu Zhijie, Song Dong, Cai Guo-Qiang and Yang Fudong. Others have been rarely seen in New York, if at all.

Ink Art is the first overview of contemporary Chinese art at the Met, a museum celebrated for its superb collection of traditional art from China. As with other distinguished art institutions of late, the Met has embraced the present as a way to invigorate the past, adding new readings to both old and new. The curator of this current exhibition is Maxwell K Hearn, the head of the department of Asian art, in collaboration with members of the department, and the show is installed throughout the Chinese art galleries rather than in the contemporary galleries. It was a happy thought to place the new art in proximity to historical work – centuries of it in this case – to see how individual talent dealt with tradition. Comparisons are immediately available and illuminating, turning a thoughtful and beautiful endeavour into a one-of-a kind show, not to be missed.

It is all the more disappointing, then, that there are so few women in it, two by my count: Xing Danwen, who depicts sleek, large-scale, digitally manipulated chromogenic prints that refer to China’s rapid urbanisation and soulless high-rise living, and Duan Jianyu, whose work comments on the country’s commercialisation, her silhouetted ink drawings of what have become branded, overrun tourist sites prettily rendered on flattened, throwaway cardboard packaging. This gender imbalance is unfortunate, an inaccurate representation of current Chinese art with its many talented women artists and a missed opportunity in an otherwise gratifying exhibition.

The show begins in the Great Hall, at the entrance to the Chinese galleries, with three grand wall hangings in ink by Qiu Zhijie, part of a series that refers to the frequent suicides that take place at the Nanjing Yangtze bridge, and Yang Jiechang’s Crying Landscape (2002), five enormous triptychs hung overhead like banners. In the classic blue-and-green style of Chinese landscape (shanshui) painting, they envision the destruction of emblematic structures of power such as the plane crash in to the Pentagon on 11 September 2001. As dramatic as they are, the impact of these monumental works suffers in their isolation from the main body of the exhibition, as if they are part of another project. Along the way, there are a few works by Ai Weiwei, China’s most famous artist/activist, with others of his installed throughout the exhibition, like a show within a show, although most of them seem to have little to do with ink painting.

The exhibition is divided into four sections: text, landscape, abstraction and “Beyond the Brush”, a catchall for non-traditional works that exhibit an “ink aesthetic”, the strength of the show being the experiments with calligraphy and landscape. One standout is Gu Wenda’s boldly graphic hanging scrolls from his Mythos of Lost Dynasties Series (1984-85), the earliest works in the show. In them, he plays with the meanings of Chinese characters that sometimes contradict themselves, and are often stylised to the point of design, braiding together semantics and social critique. Wu Shanzhuan’s equally vivid, red, white and black characters refer to the posters of the Cultural Revolution, although their message is purposefully unclear, subverting the dogmatic intent of the originals.

Many of the works on display are by now contemporary Chinese classics. Xu Bing’s Book from the Sky (c1987-91) is one, an encompassing installation of hand-printed books, hanging scrolls and scrolls suspended from the ceiling to form a vast canopy, the characters invented and undecipherable. Non-Chinese readers won’t know that unless told, the inquiry into denotative, connotative and visual meaning being one of the artist’s signature tropes. Another contemporary classic is Zhang Huan’s Family Tree (2001), consisting of nine colour photographs of the artist’s face gradually inked over by Chinese characters until it is completely blackened, the characters obliterated, with multiple implications regarding language, knowledge and politics. Qiu Zhijie’s best known work, Writing the “Orchid Pavilion Preface” One Thousand Times (1990-95), comprises five chromogenic prints that document his copying of this exemplary text by a master calligrapher, over and over, until the page is black, another riff on the obscuring of words – a critique of methodologies with opaque end results, on the one hand, and an acknowledgment of the age-old Chinese process of copying to acquire mastery and demonstrate reverence, on the other.

In the landscape category, although the divisions inevitably overlap, Ren Jian’s Primeval Chaos 1987-88, a handscroll that measures almost 100 feet, is an eye-catching blend of the fantastic vistas of Chinese painting with the mystic visions of artists such as William Blake, drawn using chiaroscuro, synonymous with western representational art. Liu Dan’s ink handscroll is another extravaganza, its roiled tonalities of peach and grey suggestive of scudding baroque cloudscapes. Huang Yan, however, forgoes paper to tattoo his torso with verdant literati landscapes. Seen quite often in New York is Song Dong, another star of contemporary Chinese art, represented here by photo documentation of his well-known 1996 performance in Tibet’s Lhasa River, in which he attempts to write on water, pounding it with a wooden seal, saying finally that he “exerted great force, but in the end left no trace”.

Qiu Shihua’s pale landscapes are barely visible, and appear at first and even second glance to be an abstraction, a postminimalist monochrome, painted in the western tradition of oil on canvas, while Wang Dongling’s fierce abstractions in black and white owe a debt to calligraphy and Abstract Expressionism, while Abstract Expressionism, it should be remembered, is indebted to Asian art and calligraphy.

The last category seems not as adventurously considered as it might have been, although the pieces presented are handsome: ingeniously joined together chairs by Shao Fan, a regal ceremonial robe in clear plastic by Wang Jin and impressive scholar rocks by Zhang Jianjun in silicon and in stainless steel by Zhan Wang.

There is a dedicated screening space for films that include several short and appealing black-and-white animations by Qiu Anxiong, his slyly humorous drawings reminiscent of William Kentridge, an acknowledged influence, and the more vernacular genre of Chinese painting mixed with literati conventions, his narrative progression dependent on visual components rather than plot. Quite different are Sun Xun’s compelling animated woodblock drawings, his bluntly powerful, realist figures summoning the Kafkaesque ambience of the Cultural Revolution. Different again is Yang Fudong’s exquisite film Liu Lan, a beguiling, ethereal reverie accompanied by wistful music that evokes nostalgia and loss, as a young man in a white suit lingers in a fishing boat with a beautiful peasant girl. The stuff of traditional poetry as well as an iconic 1930s Chinese film, is it a romantic tale of inapposite love or an allegory of transition as the agrarian is uprooted by urbanisation? 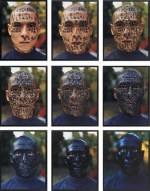 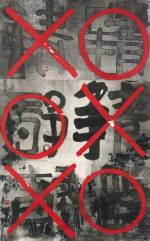 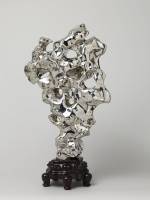 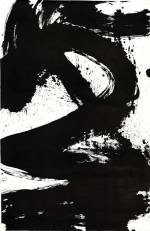 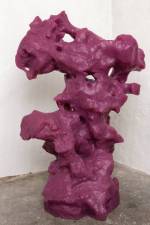