A picture of ArtRio 2013: An invitation to think about Art Fairs

A picture of ArtRio 2013: An invitation to think about Art Fairs

The third ArtRio, which took place earlier this month, spanned five massive warehouses in Rio de Janeiro and included works from 106 galleries, 59 of which were Brazilian and the rest from around the world.

With more than 7,000 artworks on display in an area of 20,000 sq m in the city’s port region, the art fair attracted 52,000 people. It was a huge public exhibition and an international meeting point for art patrons. With impressive numbers for a budding art fair, but without sufficient originality to leave a great impression, ArtRio raises the question: What should a new art fair consist of if it is not to be thought of as just another fair?

The truth is that art fairs are not the kind of place where we expect to see a significant revelation in the arts. Perhaps the fair was truer to its artistic essence at the beginning of the 20th century when the Armory Show brought to American collectors what was at the vanguard in Europe at that point, including The Nude Descending a Staircase by Marcel Duchamp, in 1913. But it is undeniable that art fairs these days have a clear commercial purpose and are conceived with business in mind. On the one hand, one could say that since international art exhibitions have gained a higher status and disseminated into different regions, leading art fairs to play a more substantial business role, non-commercial exhibitions can concentrate on offering cutting-edge art. On the other hand, a less optimistic person might say the fact that art fairs are focused mainly on money instead of art is just a sign of the capitalist world in which we live, in which everything can be transformed into goods and even an art display can be arranged like the vitrine of a department store.

What is not in dispute is that the number of art fairs is growing and growing, and those with the pretention of being big are appearing everywhere. Just this month, ArtInternational Istanbul was inaugurated and Art Moscow celebrates its 17th outing, while October starts with one of the most anticipated of all, Frieze in London. Moreover, Frieze opened an offshoot in New York in 2012, and ArtBasel, also an important fair, has had an affiliate in Hong Kong since May this year. Fairs are also becoming highly specialised: there are, for example, art fairs for new artists, for affordable artworks, or for art from a specific region. So it is more than a little disappointing that in such a vast-growing sector, a fair that wants to make a difference does not dare to have a more inspiring artistic commitment. ArtRio fails in this respect, even though it was successful in doing business and gathering people. For example, the owner of the eponymously named Luciana Caravello gallery in Rio sold almost all the artworks she brought to the fair. She has participated in all three ArtRios and her pieces have found great favour, so much so that this year the gallery doubled its profit. She said that Alexandre Mazza, who works with visual illusion with lighting and mirror boxes, was the best selling artist, and buyers were also quick to buy sculptures by Walmor Corrêa.

ArtRio 2013 claimed to be strict when selecting galleries to participate this year, and there were fewer galleries than before. This time, too, the organisers limited the number of paying visitors, advising the public to book tickets in advance. Last year, more than 70,000 people went to the fair and there were times when the organisers feared the crowd posed a risk to the integrity of the artworks. However, in view of the fact that it is rare for such a large number of art pieces to be seen in one place at the same time in Brazil, it is somewhat of a contradiction that viewers were not as welcome as potential buyers or patrons. Perhaps, the austerity at this year’s fair affected exhibitors so that they did not feel comfortable enough to be daring when picking what would be on display. Most settled on more obvious names, and artworks by the same top-selling artists were frequently to be seen on several different stalls. Few galleries bet on introducing new art into the market. Therefore, of course, Damien Hirst’s dots paintings and Alexander Calder’s mobiles, ubiquitous at the majority of fairs, were there too. Hirst was represented by both the White Cube and the Gagosian gallery, the latter also putting a painting by Jean-Michel Basquiat on sale for $5m. Calder was represented by more than five galleries, and the rumour spread that on VIP day one of his mobiles fetched $8m. This could not be confirmed because the galleries had made an agreement not to divulge figures.

William Kentridge’s triptych screens video No, it is (2013) at the Marian Goodman gallery stand was a good example of the unusual presence of a video artwork. Elsewhere, there were hardly any artworks related to video art or performances. It was more common to see artworks you could wrap up and carry home. An exception was the session titled Lupa that was specially designed for large- scale works. Despite the fact that the invited curator, Abaseh Mirvali, claimed that this was envisaged as a site-specific installation, it did not seem to be the case. Rather, it looked as if big artworks that did not fit on the stands were simply placed in a reserved space. There were good artworks, such as a new sculpture by Ernesto Neto, where people could rest in a hammock, and an Op Art installation by Julio Le Parc, but they did not share a clear dialogue with the space they were occupying.

Moreover, only a few galleries managed to cause a sensation by creating a curatorial arrangement of pieces. Amarelo Negro, a local gallery from Ipanema, chose to exhibit on its stand pieces by the artists Efrain Almeida and José Rufino, and to contextualise them. The gallery invited the curator Marcelo Campos to organise the display and compose a text. Other galleries from Rio, such as Mercedes Viegas, Progetti and Inox, changed their displays almost every day, rotating exhibitions by the artists in their catalogues. They tried to make the most of a rare opportunity to reach a wider audience in the city. But, in general, ArtRio had a very conventional presentation, different from the kind of frenetic spectacle and competitive public programme that we see in other similar big events. Indeed, the highlight of the programme were the mini-events that stalls put on. The Visual Art School of Parque Lage launched one print a day by different artists. The Aut Aut gallery, also Rio-based, presented for the first time the Holy Family series of serigraph prints by Mauro Espíndola.

From what could be seen at ArtRio 2013, it is a “proper” fair and, indeed, plays well the role of a tool with which to measure the art market. Nonetheless, is it not reasonable to expect more from such a fresh and ambitious event? The only newsworthy thing to come out of it was the deal it brokered with the government to lower state import taxes on business deals during the event. Brazil’s fiscal duties on international artworks are punitive, far higher than in other countries, making the purchase of foreign art by Brazilian collectors almost unfeasible. This deal provided an opportunity for foreign galleries to do business in Brazil.

Blain|Southern gallery had its debut at ArtRio this year. It brought, among other artworks, those that had been in recent exhibitions at its bases in Berlin and London, including pieces by Bill Viola, Francesco Clemente and Tim Noble and Sue Webster. Adrian Sutton, director of the gallery, explained to Studio International that he puts a lot of thought into selecting the artist according to where the fair is and what will attract the public and collectors. He also said that because the gallery has an international scope, it consequently has clients in South America that it would like to visit, particularly in view of the commercial opportunities the fair offers: “Brazil is a great emerging economy and we do know collectors here. It is really great to come to their home country. We are not starting from scratch and we are greeting old friends.” 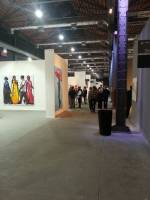 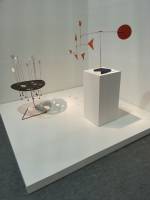