Cildo Meireles: From Sense to Concept

Cildo Meireles: From Sense to Concept

For Brazilian artist Cildo Meireles’s first major exhibition in Europe, Tate Modern created a warehouse-size open space by removing the interior walls of one of its largest display areas in order to showcase some of the largest installations by an international artist ever shown at the museum 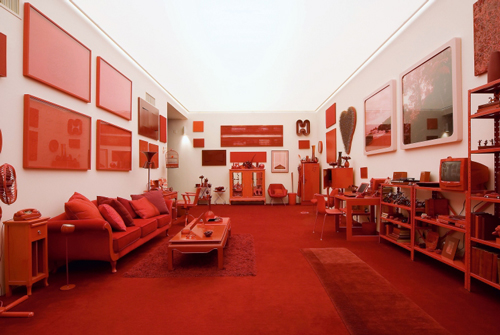 Approximately 70,000 visitors from home and abroad queued up to await their turn to view the eight large-scale installations and more than 40 works including sculptures, drawings and other objects. After closing at Tate Modern, an ambitious travelling schedule will keep the artist's work in the public eye through June 2010.

Since the 1970s, Cildo Meireles (b.1948, Rio de Janeiro) has been a prominent name in the Latin American avant-garde. Despite having been labelled by critics as a conceptual artist, Meireles considers that the materiality of his works embodies his ideas. His sharp perception and precise artistic practice can be compared with the creative process of a storyteller. He uses a diversity of means to evoke an atmosphere and set the grounds from which narratives will emerge. In the case of the Tate exhibition, the stories arising in some of his large installations have greater power because of the absence of barriers separating the different works. The curatorial team consisting of Tate Modern Director Vicente Todolí, Assistant Curator Amy Dickson and independent curator Guy Brett highlighted the complementary nature of Meireles’s works to reveal the overlapping dialogues the artist orchestrates in his works.

The imposing presences of 'Eureka/Blindhotland' (1970–75), 'Glovetrotter: Brave New Worlds' (1991), 'Through' (1983–89) and 'Missions/How to Build Cathedrals' (1987) open the show and give those unfamiliar with the artist's work an indication of his depth and scale. 'Eureka/Blindhotland' is a multi-sensory installation beckoning viewers into a space demarcated by a fishing net. An illuminated set of scales and hundreds of identical spheres set on the floor can be seen inside the space. The sound of balls bouncing can be heard coming from the background. The visual features and resonant sounds provoke those inside to pick up the spheres on the ground, thereby revealing perplexing disparities of weight. The spheres look the same but are made of different materials. In 'Eureka/Blindhotland', the artist questions the conventions of empirical reality by exploring notions of relativity and unpredictability. The work playfully revives the ancient experiment conducted by Greek scientist Archimedes (287–212 BC), who is famous for exclaiming ‘Eureka!’ when he discovered how to calculate the weight of irregular bodies.

The sound of the bouncing balls reverberates through the exhibition space until visitors arrive at a 5.2 x 4.2-metre piece of stainless-steel mesh on the floor, which composes 'Glovetrotter'. Under the mesh, Meireles created a planetary system with spheres of diverse sizes, seemingly made from materials as diverse as basketballs and pearls. The modular capacity of the medieval-like textile shows the contours of the balls but does not entirely reveal them. Meireles explains that the title alludes to the idea of 'the great voyages of the modern age'. But in this universe, where the spheres are captured by the heavy interlocking net, there is no orbit. Like 'Eureka', 'Glovetrotter' pursues a sensorial experience surrounding the means and theme of ‘what you see is not what is shown’. In the case of the delineated spheres immobilised by the exquisite metal fabric, the artist also provides a synaesthetic effect, suggesting that someone could have tactile perceptions using their sense of sight. The same effect is explicit in the wall-hanging sculpture, 'Blind Mirror' (1970); in this work, a white frame resembling a bathroom mirror encloses a grey mastic gum. Most likely, many viewers will feel impelled to stick their hands into the amorphous surface and give a volumetric aspect to the ‘reflected’ image.

'Through' is a 225 square metre-long labyrinth of corridors divided by materials ranging from mosquito and tennis nets to aquariums, chicken wires and chains – barriers that block passage but permit one to see what is beyond. In the centre of the installation is a six metre-high cellophane ball. In order to reach the giant globular structure, viewers must walk on a glass path. The work recalls legendary mazes and heroic paths present throughout Western literature. With every step taken, the glass cracks more and more noisily, leaving a route of broken fragments to follow. 'Through' plays upon a tension between fear and delight. Even though the barriers can be seen through, it is necessary for those who travel the path to remain alert while walking. The contrasting properties of the different materials act in counterpoint to the transparency intrinsic to all.

Although they are not illustrative, each element composing Meireles’s installations unpacks parables and tales as if to test his audience's ability to discover meaning. Establishing a strong poetry of substances, this seductive approach enlists viewers to draw out narratives by using their senses and perception. The artist thus merges each person's contribution to the artist/viewer dialogue with his own thematic preoccupation with a specific moment in Brazilian colonial history. 'Missions/How to Build Cathedrals' is a breathtaking composition related to the encounter between indigenous tribes and colonial power. The base is a massive rug of thousands of coins (British pence). About eight feet above this perfect bronze square, the artist suspended another square comprised of approximately 2,000 dangling bones. A delicate central column made of 800 communion hosts connects the base and the pendulous mortal remains above. Meireles created the work for a group exhibition on the 300 years of Jesuit settlements founded in southern Brazil between 1610 and 1767. The missions, as the settlements were called, aimed to evangelise and convert native peoples. Meireles conducts a critical review of this historical episode in which an entire indigenous population was forced to renounce their beliefs and integrate with a society ruled by Christian doctrines and mores. The artist not only guides his allusive interpretation but opens the aesthetic experience to other perceptions. In his words, he uses the components of 'Missions/How to Build Cathedrals' not as symbols but as matters. In effect, Meireles allows viewers to become archaeologists given an opportunity to decipher his installation or fill it with multiple meanings.

Meireles’s works can be considered as sensual and at the same time, highly cerebral. Certainly, there are aspects his practice that requires a contextual frame; for example, his political concerns (oppression, censorship, economic disparity, etc.). These concerns figure prominently in most assessments of his work. But the current showing of Meireles's works make evident another major facet to the artist's aesthetic: the means by which Meireles attaches narratives to his works and so moves them from a physical into a conceptual realm. In this sense, the first piece exemplifies the spirit of the entire display. Placed at the entrance of the exhibition, 'Liverbeatlespool' (2004) consists of the 27 songs by the Beatles that reached the number 1 position on charts in the UK or US. Joined in this way, the songs compact a sonority which gives a sense of physical appearance to the musical chords. Visitors can listen with headphones to more than 14 minutes of indistinguishable sounds. Displayed together on a wall, the lyrics form a column of unfocused sentences. The multiplicity of voices of this sound-visual-sculpture reflects an instance of curatorial choice as well as an overall method. Undoubtedly, the selection of pieces contribute to the exchange of stories among Meireles’s vast production: layers and layers of meanings coming together in the same place, pointing a way forward to a new understanding of Meireles, his work past and present and his career as one of Brazil's foremost contemporary artists. 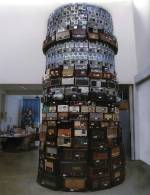 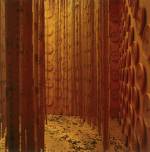 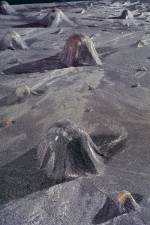 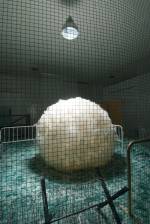 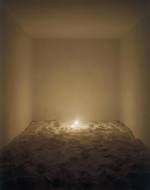