The Nova section of Art Basel Miami Beach gave artists a chance to show their latest works, from drawing, painting and sculpture to installation and video, and included work from last year’s Turner-prize winner Laure Prouvost

To help visitors navigate an overwhelming variety of art flooding the space of the Miami Beach Convention Centre, organisers of the Art Basel Miami Beach fair this year divided the exhibition space into nine sections. Among them, Nova presented new works made by one, two, or three artists within the past three years, often fresh from the artists’ studios. The 34 galleries of this section and their artists come from around the globe, bringing together South and North America, Asia and Europe. Contrary to expectations determined by a commonly accepted division of countries into rich and poor, eastern and western, developed or developing, art does not obey the rules of the economic-political hierarchy, proving over and over again that economic troubles of subaltern regions do not prevent them from producing premium-quality art. 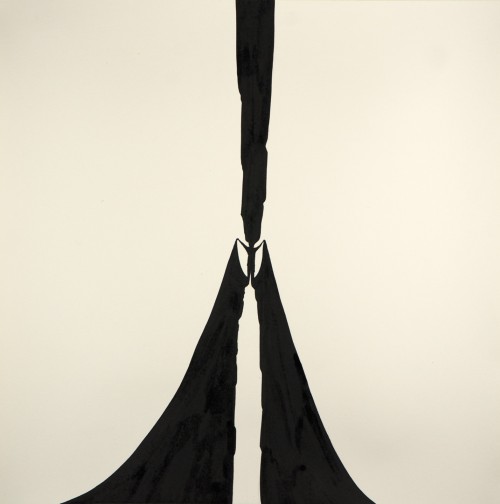 Galería 80m2 Livia Benavides from Lima, for example, presented Rita Ponce de León, an artist who works with a symbiosis of the body and the surrounding world, including space and its objects. Space is a governing idiom in her vocabulary, directing her work in her multimedia creations. Apart from objects, which the artist makes from various materials, she also draws, and it is her stark black-and-white drawings that refashion the gallery space into an area of wonderment and a possibility of imaginary transformation, bodily and mental. 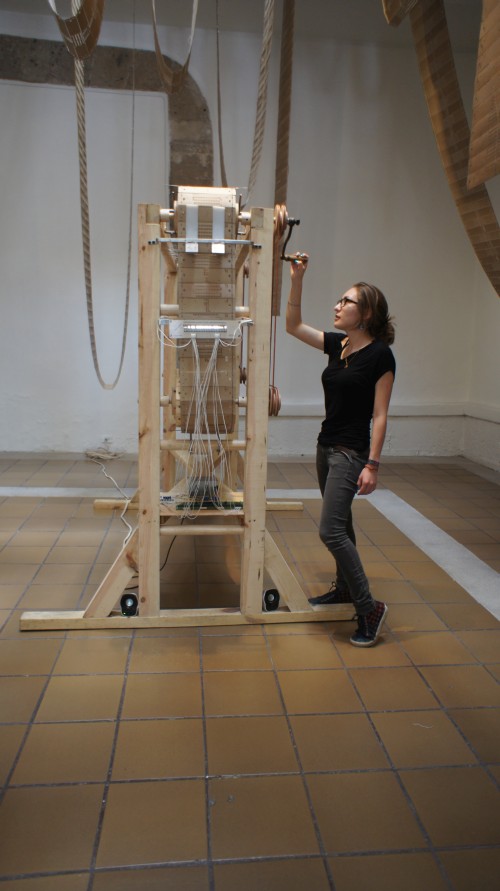 Tania Candiani, an artist from Mexico represented by Instituto de Visión, made an installation based on weaving-loom technology invented at the very beginning of the 19th century by Joseph-Marie Jacquard. Fascinated by the way technology annihilates manual labour through the process of digitisation, Candiani placed at the centre of her exposition an old-fashioned loom that used Jacquard’s punched cards. Pieces of cotton paper, made on old-fashioned Jacquard machines still in use in some towns in Latin America ­but fast-disappearing, carry the words hecho a mano (handmade) woven into them by Candiani. A nostalgic flair dominates the display, as the artist draws our attention to the complete disappearance of manual labour and the consequences of this process. 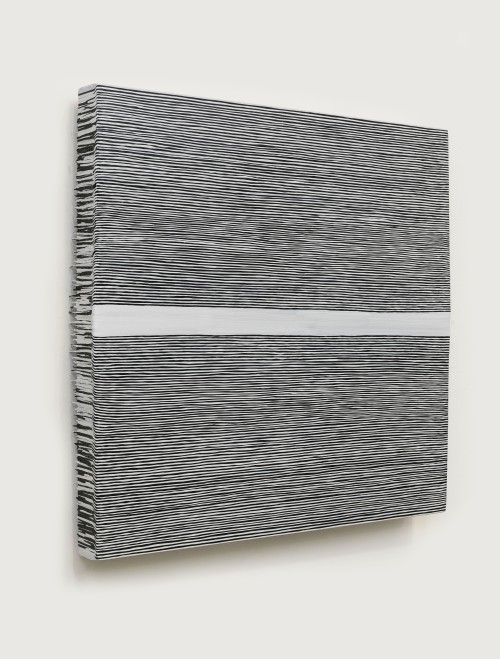 Beijing Commune showed the work of Wang Guangle, an artist born in 1976 in Fujian Province in China, whose abstractions spin off western modernism, but add to it a distinctly meditative quality. His black-and-white striped acrylics on canvas, for example, emphasise the physicality of the process of layering the paint, its thick consistency, and the lack of precision that paint can create. Unlike Frank Stella, a pioneer of object-oriented striped art, Wang Guangle arranges paint in layers, one on top of another. The resulting lines are uneven, but not faulty, cascading neatly, albeit inexactly, from the top of the canvas towards the bottom, stopping a couple of inches from its edge. The sides of the canvas are also exposed to bring the viewers’ attention to the natural messiness of the painting process. The picture plane as such is abolished; instead, we have a canvas stretched, but its edges accentuated. As they turn the corner, the neat strips blend together into indistinguishable clusters, accentuating the artificiality of order that painting imposes on the world. 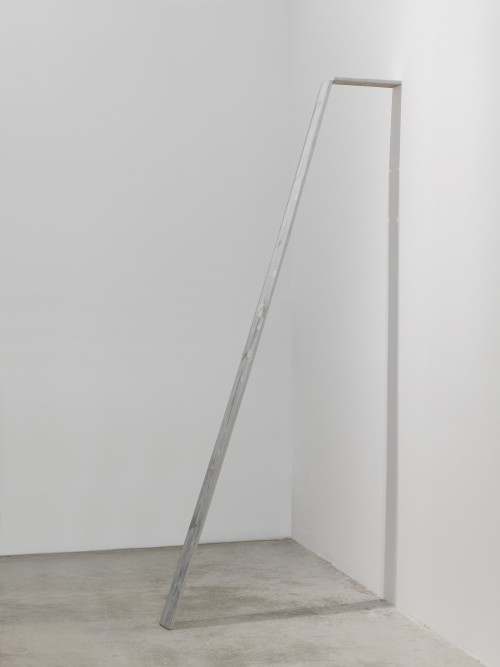 Hu Xiaoyuan’s work, also shown in the same space, echoes Wang Guangle’s in its appeal to the natural world and its creations. Instead of painting, Hu Xiaoyuan (b1970) makes sculptures from wood and other natural materials. In her installation at Art Basel Miami, she showed wood pieces wrapped in silk with lines of wood grain traced over the delicate cloth with ink. It takes a long time for Hu Xiaoyuan to make each sculpture. After the initial tracing of wood grain on silk, she takes the cloth off and carves the wood along the lines she has made. According to the artist: “After undergoing cross-cutting, deep gouges and shallow slices, the wood reveals layer upon layer of veins. The wood grain exposed by each layer is both similar to, and dramatically different from, the original group lines drawn on the surface in ink.” Hu Xiaoyuan nails the silk back to the wood after she has carved it and painted it white. The process of creating the work reveals the difference between surface and depth and a connection to nature. 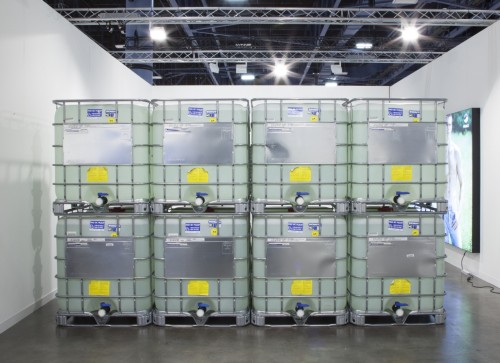 A gallery from Berlin, Société, showed American artist Sean Raspet, who captured the viewers’ attention with his industrial-sized plastic containers stacked up wall high and filled with methyl anthranilate, a chemical used in the cosmetics industry and as a flavouring in drugs, sweets, chewing gum and soft drinks. A decade ago, Raspet became known for his work with chemical substances used in industrial production, especially in the processes of producing flavours and fragrances, two hugely profitable industries that do not provide people with anything essential for survival, but rather, like over-the-counter drugs, alleviate their discomfort while the underlying illness goes untreated. Raspet is interested not so much in industrial production, but in its representation. Unlike in business, where the finished product is the only thing that counts, he is drawn to the process of creating flavours and fragrances artificially.

With a knowledge of chemistry that goes beyond high school, he merges science, business and art in a seamless representational web. For example, to understand the work, it is important for viewers to know that, apart from the visual impact of oversized containers filled with a potent digestible chemical, methyl anthranilate can be used to alter both flavour and taste: at relatively low concentrations, it emits a pleasant flavour, but at higher ones it tastes bitter. Because of its flavourful qualities, it is introduced as a base for fragrances. Birds cannot stand its taste even in small doses, so it has also been used in agriculture and other industries to repel them. Methyl anthranilate is not only produced commercially, but also occurs naturally in some plants, including lemon, jasmine and mandarin. The viewer is also relieved to find out that, even though the liquid in the containers does not invite an instinctive trust in its beneficial effect on the body and mind, the chemical is not lethal; it has been given a GRAF, “generally recognised as safe” classification and approved for use by the US Food and Drug Administration.

Apart from painting, sculpture, drawing, and installation, video artists showed some of the most engaging work in the Nova section of the fair. In Souvenir III, Hiraki Sawa, represented by Maisterravalbuena from Madrid, recorded a woman looking at a flame. The video is slow-moving and meditative, just as the burning of the flame. It does not last as long as it takes for a candle to burn, but the artist manages to create its own time, achieving the meditative effect of eternity and calm, which stays with the viewer long after the video ends.

Laure Prouvost, a French-born, London-based artist and a last year’s Turner Prize-winner, ran her recent video How to Make Money Religiously. In an expert way, she deftly uses video technology to capture the viewer, tell a story, and make a statement about money and its place in the world. Prouvost came to video through installation art, and in her camera work, she merges seamlessly the real and the digital, installation and video. Her video work is remarkable in that, with all its interruptions and fragmentariness, it has a pull, creating an illusion of reality that feels real, and evoking a gamut of sensations that everyone watching it begins to experience.

The Nova section of Art Basel Miami showcased much talent in various media, ranging from drawing to painting, from sculpture and installation to video. The great energy generated by the fair helps artists to find their public, and brings the public to a great variety of styles, methods and ideas developed and catalysed by art. These ideas become vital only after they are seen and heard, and Art Basel Miami is becoming one of the main hubs where this can happen. 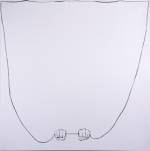 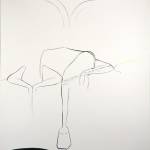 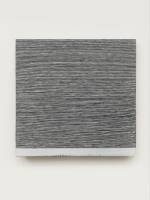