Building an Identity Through Innovation and Change: The Bienal de S&atilde;o Paulo

Building an Identity Through Innovation and Change: The Bienal de São Paulo

Taking the Venice Biennale as a model, the Bienal de São Paulo has been drawing attention since its premiere in 1951, when it brought to Brazil approximately 2,000 works of art representing more than 20 countries. As any other country with a colonial heritage in the middle of the 20th century, Brazil did not have a developed cultural policy; thus, the number of participants in the initial years signalled an amazing achievement.

With the success of the first attempt, in 1953, the second event drew paintings of well-known Modernist artists, including Picasso's masterpiece, 'Guernica'. Until then, the piece had never left New York, where it was kept while Spain was under a dictatorship. From that time until now, the Bienal de São Paulo has been considered the most important international exhibition in Latin America. The 27th Bienal de São Paulo, which opened on 7 October 2006, not only displays the latest styles and range of the artistic scene with works by more than 100 artists from all continents, but also offers visitors an original approach. After five decades, the Bienal de São Paulo finally revealed a unique identity, one that sets it apart from other large-scale international shows.

Until 2004, the Bienal de São Paulo maintained the traditional notion of 'National Representations', a philosophy that guides the organisers of the Venice Biennale. Organisers in Brazil have developed a new theme, 'How to Live Together', and Curator-chief of this year's event, Lisette Lagnado, has successfully abolished the boundaries between the nations. Lagnado with Co-Curators, Adriano Pedrosa, Cristina Freire, José Roca, Rosa Martinez and Jochen Volz, travelled abroad searching for emerging voices in contemporary art. Although Lagnado aimed to make this year's event a window to the latest expressions in the art world, she also invited some celebrated names that had never had adequate attention in Brazil. The criteria for all artists to take part was showing work that reflected the exhibit theme of 'How to Live Together'.

The theme may seem a bit broad to bring together a variety of works and styles into a cohesive whole, but it seems as though Lagnado's plan has been achieved. The works of artists who established their careers in the 1970s are shown together with that of artists born when the earlier generation was coming of age. Representing the latter are renowned artists including American Dan Graham (b. 1942), who created a work specifically for the occasion; Argentine León Ferrari (b. 1920), who joined the Tucumán Arde, in 1968, a free-expression action that took place during the Argentine military government; and Polish Jaroslaw Kozlowski (1945), who wrote a manifesto in 1971 urging artists from different countries to exchange discussions without institutional mediation.

Examples of works by conceptualist thinkers are dialogues with maps and diagrams made from scraps of paper and scotch tape by English artist Simon Evans (b. 1972); video-installations of Portuguese partners João Maria Gusmão (b. 1979) and Pedro Paiva (b. 1977); and South Korean Sanghee Song (b. 1970), who presents a political critique through photography, sculpture and videos. While the majority of works come from recent production, the curators also allotted space for some important names in art history. Thus, the public can see a small retrospective of such artists as American Gordon Matta-Clark (1943-78), Cuban performer Ana Mendieta (1948-85); and Belgian Marcel Broodthaers (1924-76).

Another notable change in management and display at the Bienal is how the curator was chosen; this year represents the first time a curator was selected after a lengthy search. Lagnado's name was announced in June 2005. In her view, the appointment came as a surprise because, ironically, she presented as a primary project a radical transformation in the entire show.

The greatest novelty that Lagnado implemented was starting the artistic dialogue with the public and artists ten months before the nuts and bolts of staging the event began. From January of this year, Lagnado and her team of co-curators promoted conferences to discuss the themes that they wanted to highlight in the formal exhibition. For instance, the first of these meetings, 'Marcel, 30', proposed a debate centring on the life and work of the Marcel Broodthaers, who questioned the role of the artist and the function of the museum. After this debate, other conferences ('Architecture', 'Reconstruction' and 'Exchanges') invigorated the curatorial choices. These meetings familiarised the public with aspects that they later could see developed in the Bienal.

For the artists, some innovations also distinguished their participation. All participants are encouraged to show more than one work. Each artist could display representative examples of their lifework, which contextualised each artistic production. Moreover, some artists were invited to take part in artistic residences in different states of the country. Perhaps this initiative can be considered the key innovation of this Bienal. From these artists came the most experimental works shown. In fact, the artists are exceptional not because of their style or any high-technique medium, but because of how their works reflect a new way of seeing that resulted from a nexus of cultures.

Ten foreign artists went to Brazil in the beginning of the year. As they mentioned later, most of them had some stereotypical expectations of a 'tropical' country. After live-observation, they confirmed that their original ideas had changed. Lagnado sent a group to the State of Acre, in the middle of the Amazon, a place that even Brazilian citizens do not know well. The Canadian artist Susan Turcot (b. 1966), who lives in London, was one of the selected guests. Later, she wrote in the exhibit publication that accompanied the display of her works that she could never have predicted what she would find there. After her first impression of the Rio Branco city, she said she observed a dichotomy between the 'fresh' atmosphere of the forest and the attempts at progress in the town. Soon, Turcot understood the demands from the people who live there, how they deal with the problems that arise from a dislocating gap between the under-developed town and the vitality of the forest. From this experience, the artist created some powerful drawings, very simple in appearance but with the conjunction of the complexity of meanings: pencil delineated lines that become trees and people; lines that designed homes but at the same time are indigenous iconography.

Another clear example of the creative output of those who travelled to Brazil is the work of Japanese artist Shimabuku (b. 1969), who lives in Berlin. He spent a month in São Paulo, the biggest metropolis in Brazil, and noted a change in his work after living time in the city. Shimabuku, who calls himself not merely an artist but a traveller and a fisherman, prepared a video that chronicles his journey with a live octopus. He stopped people in the street and told them a fishermen story to listen to comments from them. The video presents the process of building a story based on the listeners' impressions. He said he could not foresee how his own story would become another tale as the people contributed their comments. While he was in the commercial district of Anhangabaú, he met two men who survive as musician-storytellers and they quickly transformed his video about the octopus into an impromptu singing performance. Later, what began one video became a video installation in which the duo of performers appears relating the story of the primary video.

The initiative of persuading artists to spend time in Brazil symbolises what innovative initiatives can do to further creative potential and output. Rather than follow an older, acceptable model, Lagnado and her staff chose a path that somehow embraces the old and the new but gives the lead to the future.

'How to Live Together' ('Como Viver Junto'), the 27th annual Bienal de São Paulo, opened on 7 October 2006 and runs through 17 December 2006 at the Bienal Pavilion in the Ibirapuera Park, São Paulo. 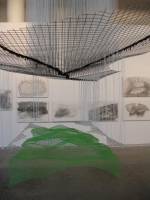