The origins on paper

When art patron Peggy Guggenheim met Robert Motherwell in the 1940s, she encouraged the young artist to work with collage and also organised his first solo exhibition at the Art of This Century gallery in New York. This story is remembered in the show Robert Motherwell: Early Collages, at the Peggy Guggenheim Collection space in Venice, where Motherwell’s works on paper from 1941-51 are on display. Through gestures such as cutting, tearing and layering, and the influence of Surrealism, Motherwell, who became an important figure in American abstractionism, developed his own visual vocabulary. 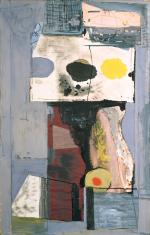