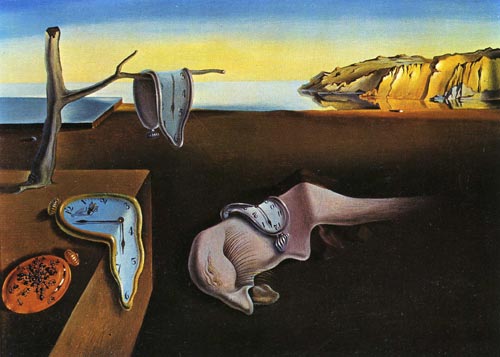 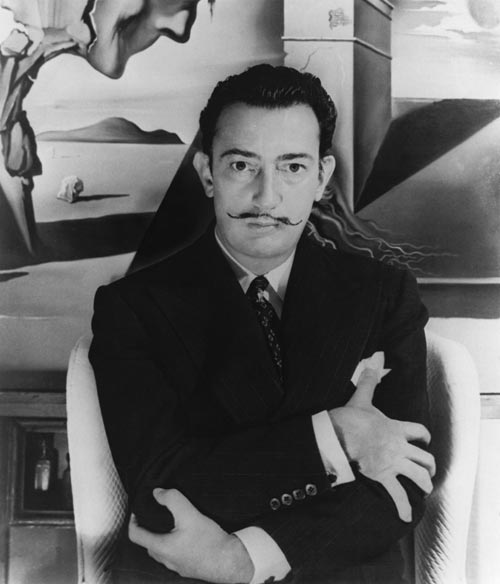 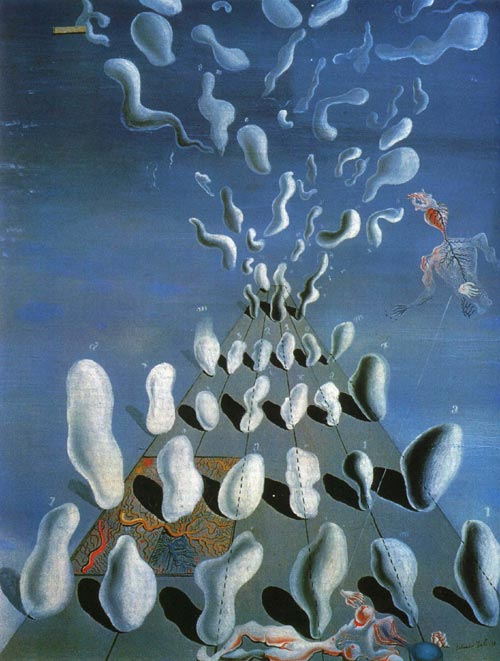 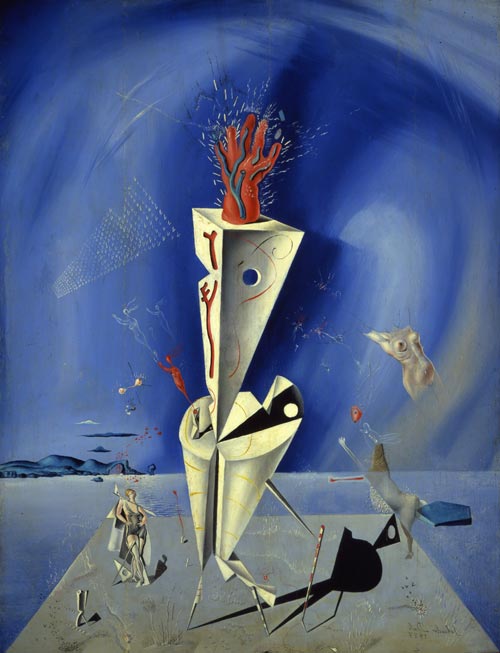 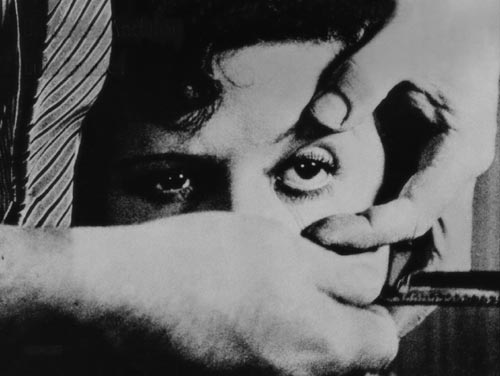 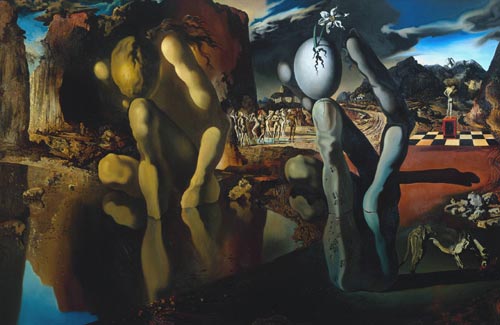 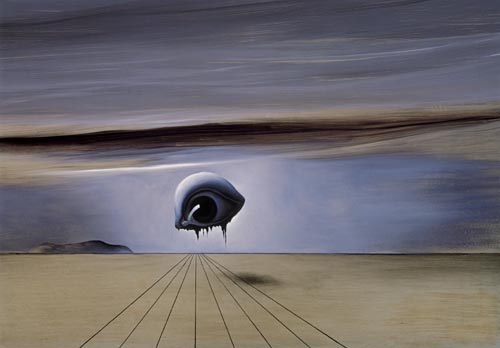 The Apparitions of a Surrealist Eye: Dalí & Film

Salvador Dalí's involvement with film was profound and critical to his artistic sensibilities. Born in 1904 in Figueres, Catalonia, the Spanish artist was being raised when the newly developed medium of film was in its infancy. Remarkably, Dalí maintained a continuous and intense relationship with film up until his death in 1989. Dalí & Film, a travelling exhibit that premiered at the Tate Modern in London during summer 2007, highlighted connections between one of the 20th century's most unique and talented artists and what came to be a lifelong fascination for him.1 Although the curators presented this dialogue in a very academic way, the explicit linking of Dalí and film necessarily points to the instrument that acutely registers the underlying irrationality of events: the surrealist eye. It is an instrument to which the artist was firmly committed.

Dalí shot some films, notably 'Un chien andalou' (An Andalusian Dog) (1929), with his close friend, Spanish film-maker Luis Buñuel (1900-1983). In Buñuel, Dalí found a kindred spirit, as both artists enjoyed rebelling against convention and shocking respectable and respected tastemakers. Dalí also collaborated with talented (and enormously popular) filmmakers with widely diverging perspectives and audiences, including Alfred Hitchcock and Walt Disney. Among those who influenced him were the Marx Brothers and Cecil B De Mille. In 1946, he and Disney started to work on a short animated film, 'Destino'. This film remained unfinished until 2003 when, at the behest of Disney's grandson, Roy, French director Dominique Monfery completed the work using Dalí's original sketches. Dalí also served as a set designer on the production. Alfred Hitchcock's 'Spellbound' (1945) is one example: Dalí created the visuals for the psychological thriller's famed dream sequence.2 Amazed with the new possibilities of lighting and composition, Dalí even promoted cinema over painting, imagining the medium as the future of the visual arts. He felt that film would enable him to see possibilities such as those proposed in the painting 'Morning Ossification of the Cypress Tree' (1934), an image that reflects cinematic lighting and the possibilities for fantasy inherent to film. For Dalí, of course, the fantasy was always in dialogue with a very realistic style of drawing. (In the painting, a horse that flies from inside of a tree-like figure touches the skies, a fantastic image, but represented with a realistic style.)

An essential element of Dalí's works and the core of his approach to Surrealism is something we could call 'apparition'. In every image Dalí created, something emerges and changes the traditional space. Because the object simply emerges, it looks fantastic, magical, and yet at the same time it typically is also figurative and recognisable. While Dalí is now known as a major 20th century Surrealist, in 1939 he broke with the Surrealist movement.3 In fact, he never really adhered to certain central principles of the 'Manifesto of Surrealism' written by the French writer André Breton in 1924. It isn't difficult to imagine the painter of 'Soft Watches' (1933) rejecting such a rule as this one: 'The simplest Surrealistic act consists of dashing down into the street, pistol in hand, and firing blindly, as fast as you can pull the trigger, into the crowd'. Dalí planned his shots, and they could never be called 'blind fire'.

Nevertheless, some practical tenets of Surrealism can be found in Dalí's works across media. One principle, promoted by the philosophical turning point opened by Sigmund Freud's theories, dealt with the rupture between object and traditional meaning. This notion is quite clear in the work of another important Surrealist, the French painter René Magritte. His painting 'La Trahison des Images (The Treachery of Images) (1928-1929) shows a figurative pipe with a sentence written below it saying: 'This is not a Pipe'. And, of course, the idea can also be detected in Dalí's works.

Dalí played with 'meaning' by elevating some entity that invades the landscape. Thus, the nude figure of Dalí's wife, Gala, gazing out of a window is transformed into a portrait of American President Abraham Lincoln in 'Gala Contemplating the Mediterranean Sea' (1976); one of the most famous actresses of her time becomes a room ('Mae West's Face which May be Used as a Surrealist Apartment' [1934-1935]); and the face of the most famous child actress of all time functions as the head of a sphinx ('Shirley Temple, the Youngest, Most Sacred Monster of the Cinema in her Time' [1939]). All of the preceding images consist of recognisable subjects in a composed space. Dalí himself alluded to the phenomenon of apparitions in images in such works as 'Apparition of a Face and a Fruitdish on a Beach' (1938) and 'Partial Hallucination: Six Apparitions of Lenin on a Grand Piano' (1931). However, in these two works the artist placed an entity in a foreign context. In the first, a traditional beach landscape has been altered by a two-dimensional face, three-dimensional sea shells and sand and the second shows small heads of Soviet leader Vladimir Lenin surrounded by light and covering the keys of a piano, as if they were spiritual manifestations.

Dalí & Film was organised by a group directed by Matthew Gale, the curator of the Tate Collections and author of 'Dada & Surrealism' (1997). Consisting of more than 100 works, more than half of them paintings, the exhibit is divided into 14 sections. Each section is connected in some way to Dalí's 'biofilmography', his recurring blending of film and other mediums. In the first section, 'Madrid', for example, are works from Dalí's student years in the Spanish capital, where he studied art at the Royal Academy of San Fernando between 1922 and 1926, and where he befriended Buñuel and the poet Federico García Lorca. In Madrid, Dalí developed an impressive ability for drawing and an eagerness to see beyond the consensus called 'reality'.

Perhaps the most interesting suggestion made by the exhibit is that to create his apparitions, Dalí placed observation points throughout his works. Every foreign object works as a magnet to draw the eye, a pointer toward new understanding. Indeed, apparitions appear throughout the exhibit. Each apparition, each alien entity pervading an image, leads to a peculiar dialogue between the eye and what it sees. Dalí's handling of apparitions recalls the idea of the 'persistence of memory',4 a process in which the semiotic effect is produced by a change in context. An object is placed where its form suggests an accepted meaning and, at the same time, something different from that meaning.

It could be persuasively argued that the artificial eye that Dalí inserted into his works is their most important element. Ultimately, this is the reason that Dalí and film can be closely related. To understand the artist, one must consider his attraction to and work in film. The invention of cinema established new possibilities of observation. Beyond the recording of motion, film expanded possibilities for perception with the 'montage' and editing techniques. Dalí's artistic sensibilities developed concurrently with the popularisation of cinema as a spectacle and with the invention of many film-making processes. For example, early in film history, fusion, a technique in which one scene disappears and the next one emerges, was used to create apparitions in the film mise-en-scene. Fusion enabled filmmakers to evoke the gentle passage between two different universes of images without abrupt breaks. In 1914, filmmakers began to regularly use fusion, particularly in the Russian film 'Ditya bolshogo goroda' (The Girl from the Street) (1914), directed by Yevgeni Bauer, the most influential film-maker of the early Russian cinema. After that time, western film-makers adopted fusion, and it became extremely popular as a standard method to suggest a recollection effect. Even such commercially popular films as the Harry Langdon and Buster Keaton comedies made use of fusion for a seamless blending of sequences. Dalí loved the works of silent film comedian Langdon and director Keaton and confessed to being influenced by them.

Not surprisingly, the curators chose two images of eyes as symbols of the exhibit. One is an eye that opens on a graphic desert sky in 'Study for dream sequence in Spellbound' (1944); the other is the eye from the film 'Un chien andalou'. In this film, there is a moment that is chilling and unforgettable: the slicing of an eyeball with a razor, an image edited parallel to an image of a sharp cloud that passes through the moon, also 'slicing' it. The circle of the eye and the circle of the satellite are sliced by razors. This apparently simple psychoanalytic metonymic mechanism is characteristic of the artist. It is, though, interesting that he chose to have the eye sliced at the same time that an eye observes the moon. There the eye appears as an object as much as an instrument of point of view. The apparition is some kind of mirror for the meaning inside the image and for Dalí himself.

The films chosen for the exhibit were shown in individual rooms alongside Dalí's paintings, drawings, sculpture and writings, making explicit connections between them. In the case of 'Un chien andalou', the room included the paintings 'Apparatus and Hand' (1927), in which a geometrical-but-humanoid object has a red, bloody hand on its 'head' and walks in front of a blue desert-like and celestial background, and 'Inaugural Goose Flesh' (1928), in which a group of corpuscular, almost cellular entities are distributed throughout a surface in perspective and the sky above. Separate rooms were dedicated to the films 'L'Age d'Or'(1930), the second collaboration between Dalí and Buñuel; 'Spellbound' (1945); 'Destino' (2003); 'Impressions of Upper Mongolia'(1975) and 'Chaos and Creation'(1960).

'Spellbound' and 'Destino' most cogently reveal the different sides of Dalí's artistic persona. In the Hitchcock film, the mechanics of the eye - various sets of wide-opened eyes look for the character of the scene - are readily apparent. At the same time, the eyes can also be watched, observed as much as they observe. The Disney film 'Destino' works as a kind of animated gallery of Dalí's aesthetic obsessions. 'Destino' was conceived between 1945 and 1946, and Dalí spent eight months in the Disney Studios working with the animator John Hench. Together, they made the storyboards for the film. While they worked, Hench filmed 18 seconds of material. Production was delayed and eventually abandoned, due to financial problems. At the Tate, visitors were able to view all of the sketches and storyboards Dalí and Hench created, as well as the posthumously completed film, released in 2003.

Dalí's painting 'The Invisible Man' (1930) may have made the greatest impact on visitors because of how it symbolises the artist's aesthetics. The work was hung in a room labelled 'Persistence'. Dalí saw the titles of his paintings as works of art in themselves. In this case, his aim was truly realised, for there is nothing more symbolic of his work than the apparition of the invisible. In 'The Invisible Man', double and shifting images produce a hallucinatory effect that undermines a sense of place, time and, of course, perception. The physical eye cannot be relied upon to extract meaning and, as a result, the surrealist eye takes over. In this work, Dalí produced a forceful manifesto for his own 'surrealist eye'.

2. Hitchcock's movie 'Spellbound' (1945) starred Gregory Peck and Ingrid Bergman. An entire room of the exhibit was devoted to the sequence for this psychological thriller and contained original drawings and a painted backdrop.

3. In fact, Dalí was expelled from the Surrealist movement because its members considered him to be too far removed from the ideals of the Surrealist manifesto. Mostly Marxists, they felt a large gulf between themselves and Dalí, who, ironically, declared himself to be 'Anarcho-Monarchist'. Following his expulsion, Dalí declared: 'The Surrealism is me'. Only after he had died did the Surrealists embrace Dalí as their own.