W.G. Sebald, in one of his stories in The Emigrants, describes a scene where the narrator, in his quest for knowledge about his great-uncle Ambros Adelwarth, encounters Dr Abramsky, a medical doctor who had worked in and eventually ran a New England sanatorium, and who had met with Adelwarth, an in-patient at the hospital during his tenure. By the time the narrator meets Abramsky, he has given up his practice preferring instead to spend his time as a beekeeper. In the grounds where the narrator finds the doctor, amidst the trees of this extensive garden, the cedars and pines and cypresses, stands a dilapidated building made of wood, and ornately designed and covered with verandahs and balconies bearing a similarity to a Russian dacha, as Sebald describes. This, as it turns out, was the sanatorium that housed among others, Adelwarth.

As the story continues the reader learns about the doctor’s experiences at the sanatorium, of his ideals as a young man and of his subsequent disillusionment with the work undertaken at the sanatorium. More often than not, Abramsky recalls, the patients who like Adelwarth had submitted to the medical regime of the institution, to the frequent high-intensity doses of electric shock treatment, deteriorated in their mental and physical capacities as a result.

Dr Abramsky’s response to his former occupation, and of the building associated with that occupation, was to allow the building to disintegrate, which he hoped eventually would crumble away leaving no more than  “… a heap of powder-fine wood dust, like pollen”1.

A psychiatric hospital in Southern Italy is the subject matter of Yvonne De Rosa’s current exhibition ‘Crazy God’ at Diemar/Noble Photography. After spending time as a volunteer at the hospital in the 1990s, De Rosa returns to capture the remnants of the now disused building.

Image after image, the viewer is confronted with rooms and corridors in various states of disrepair. Dust covers the floors of these rooms, and is often accompanied by lumps of fallen plaster and fragments of tiles and peeled paint. Some of the photographic images contain evidence of humanity. There are strewn bottles littering the floor in one image, and a pair of paint-encrusted and worn slippers in another (the slippers being so worn that one can gauge an impression of the gait of their former owner). In another image, a page with an image of what looks like a Madonna is accompanied by a paragraph of writing. And yet another contains a stack of photographs, their edges frayed and curled upwards looking brittle with age.

Some of the images have the look of disarray: you see the rooms as filled with objects, with plant pots and bottles and rusted forks coated with an ever-present film of dust and plaster; and yet, there is never a sense of looking at the depicted subject-matter as though it were filled with dirt and grime and rubbish. There is never a sense of being presented, image-wise, with waste material. These photographs without exception convey, beyond the objects and the architecture, a certain beauty in decay, as though you were looking at the photographic content with the eye of a painter: a painter who perhaps specializes in the subtleties of colour contrast.

Through their stillness, these images convey quietude. Nothing in the images is seen to be moving and there is no hint of movement, no awareness, however slight, of an object so much as having been touched by a summer breeze. If a footprint is seen in the dust on the floor its presence seems to be of a permanent kind; and in this respect, it draws to mind the photographs taken during the early space missions where the astronauts, alongside their photographic documentation of scientific experiments, would record some personal item, an impression of their own footprint in the lunar dust, in the knowledge perhaps that these impressions would remain on the moon for 1,000 years or more.

If a change is somehow evident, it is the type of slow evolving change, hardly noticeable, as in the case of the images which show a bundle of cascading ivy encroaching into the hospital spaces, into the cloister-like corridors, or entering through the broken windows of the rooms, where their branches like tendrils reach out seeming to grasp the few remaining items in the space, the rusted frame of a bed for instance.

The architecture and the way the light intrudes into this space appear to convey another sort of stillness. Through the architecture, the cloister-like corridors and the sparseness of the rooms, you get a sense of repose, as if the images are the recording of a disused abbey, and not a psychiatric institution. And this sense of repose seems to be intensified by De Rosa’s way of capturing light. In one particular photograph, the light is seen to enter from a side window casting grid-like shadows across the floor, revealing a soft grey dust in the process. Light also makes visible the rich browns, ochres, and yellows of the bare wall and the empty cabinet next to a bed. The bed itself appears as a thick line of deep orange, partly muted by dust.

But it is the image as a whole that seems so strikingly complete; you cease to see the room only for its emptiness. 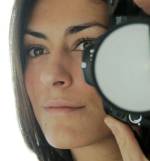