On the front cover of Ruth Barcan Marcus’ philosophical essays entitled Modalities is an image of an art-piece consisting of eight rectangular-shaped pieces created by a combination of materials: open-weave cloth, fibreglass, and latex, suspended from the ceiling. From the type of material used and the way the light is cast, this work appears strangely ephemeral, as though it might at a moment, or in respect of a certain angle, merge with the surroundings. The art-piece is entitled Contingent (1969) by Eva Hesse.

Currently showing at the Camden Arts Centre are a number of experimental objects or works-in-progress by Hesse. These can be viewed as a means of understanding the processes by which works are created. As so often with viewing studies for larger pieces, there is a sense in which you are able to witness the emergence of something from the kernel of, say, a raw block of wax or a found object, such as a tin can or a metal spring or a piece of telephone wire. You are able to observe a change from an object being something identifiable, to which you may attribute a use, to something that is perhaps suggestive of a number of things, but that defies being categorised as such. With the study, you are at liberty to peel back its layers in virtue of being able to observe each manipulation of the material, each gesture, as, for example, when the occasional finger imprint remains.

Part of the attraction of viewing an artist’s studio (an exhibition of works-in-progress being the next best thing) is in glimpsing the art-pieces that go towards the finished works: these pieces can be seen as stages in the biography of the final work. Without these preliminaries, the finished work might not have arisen in the manner it did. For these pieces can be seen as ways of exploring certain features of the overall object, as when, for example, one makes a study of the surface texture by rendering the object in fibreglass, in sugar-glass or in toughened glass. These are decisions the artist must make along the way.

Hesse’s working objects shown in this exhibition bear a different kind of relation to that of the usual subordinate role of the study, since they are not primarily the means for ironing out the imperfections of material. Hesse’s final works are often as gestural as the studies. In this respect, we might consider her study pieces as works in their own right. Each work is an exploration into the qualities of a material or a combination of materials, of the roughness of fibreglass against the viscosity of glue or wax, of the brittleness of resin or enamel, of the elasticity of latex and plastic. In this sense, these works are meant to be experienced in a tactual way. They are meant to be moved and bent and folded and pressed in order to find out the respective material’s limitations: how much pressure is needed to make an indentation in wax? Will the wax yield easily to the pressure of a finger or will it crack? How malleable is fibreglass? At what angle can it be bent before it breaks? Will it break cleanly or will it crack in a number of places? Is enamel a harder material than plaster?

Despite our lack of tactual experience in respect of these objects, we are not impoverished, sensorially. There is enough to engage the eye: we are able to move our eyes over the objects’ surfaces, to appreciate their smoothness, shininess, or metallic patina from the way the light is cast, from the particular way each surface reflects light. We notice, for example, the sheen of the black enamel encasing three paper spheres in No title (1966), or the semi-translucent quality of the fibreglass base in No title (1968). We are able to see through the many layers of open-weave cloth held within a block of resin, and to see the cloth as appearing orange, as in the case of the piece entitled Enclosed (1969).

If there is one defining idea emerging from this collection of pieces, it might be that of enclosure: of something being encased or preserved: a found object, a piece of cable or string or cloth encased within some material of which varying degrees of translucency are apparent. We might be able to see an identifiable object in the material, or we might just see the fuzzy outline, an oblique shape. In either case, what is striking about some of these pieces is that these encased objects appear ossified, similar to the prehistoric life-forms, the flies and beetles and the like, found in amber or some other translucent substance. Other pieces use the idea of enclosure in a different way: Enclosed (1969) consists of semi-translucent tubular forms, and can be likened to the hollow forms of shed skins, from creatures such as snakes, or the empty shells of crustaceans. Rather than appearing as objects of preservation they can be considered as discarded shells, of which the shape can be viewed as the index of the former occupant. 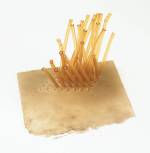