ANALOG: Trends in Sound and Picture

ANALOG: Trends in Sound and Picture

In recent times there has been a trend towards recreating the sound produced by analogue technology. This kind of sound, some say, generates a warmer and more sensual experience than sound produced by digital technology. Some even go so far as to speak of the imperfections, the noise and dust and scratches, as contributing factors towards the richness of the sound.

One has only to recall the sound of the Victrola, the voice amidst a sea of noise, the rhythmic disturbance of the sound of the needle as it presses against the shellac disk, to understand just how evocative this type of sound is. Perhaps the analog propensity for including extraneous sound, what some derogatively describe as “interference”, is the very thing that attracted John Cage to this kind of technology. This is evident in compositions such as Europera 3, which uses the sound of the Victrola alongside conventional instruments, and Cartridge Music, where sound is produced by replacing the Victrola's needle with other sharpened implements.

There are those who claim the analogue/digital distinction is rooted in the way these respective technologies favour the visual and auditory sense modalities. They argue that the processes involved in composing with reel-to-reel tape, for example, forces composers to listen repeatedly to their own construction of the piece; a labour-intensive activity that is nonetheless the means by which they come to sharpen their ear, to enhance their auditory discrimination. The digital process, on the other hand, has come to rely on the inbuilt graphic displays on mixing consoles making the editing of sound more reliant on visual cropping and pasting of waveforms.

It may be interesting to speculate on what Karlheinz Stockhausen’s electronic composition Kontakte would have sounded like had it emerged out of the digital realm. Would it have exemplified a different timbre or sharpness? Would it have lost some of its textural qualities? Would the sounds have appeared more spatial? How would FM synthesis have affected the composition? As it is, this piece is not only notable for the way the sounds have been constructed, for their arising out of the primitive sonic material produced by a combination of sine-wave, square-wave and impulse generators, but is also a testament to the virtuosity of editing, of splicing lengths of magnetic tape and assembling them to form new and exotic sounds. The processes involved in Revox technology not only influenced the way Stockhausen constructed his pieces, it also forced him to rethink the way sound can be represented in a score.

In terms of the visual, there has been a long-standing debate about the differences of quality conveyed through analogue and digital photography. Those in favour of the analogue image appeal to the process by which the image emerges as exemplifying a character wholly lacking in the digital medium. In the darkroom, one can produce images out of silver nitrate and change the qualities of those images simply by heating or cooling the developer; or by exposing the image to different filtered light, or by exposing the partially developed image to a flash of tungsten light. Furthermore, the negative can be dispensed with in favour of placing objects of different translucency on the photographic paper itself. The possibilities of making small adjustments in the developing process of the image are numerous, and cannot, or so the analogue advocates claim, be incorporated successfully into digital technology.

The questions raised here are questions explored in the exhibition entitled Analog: Trends in Sound and Picture at the Riflemaker Gallery. On the one hand, Lewis Durham’s installation consists of an analogue recording studio (commencing from 5 February) complete with original 1950s 8-track recording equipment and lathe for cutting disks. The point of the installation is to give members of the public the opportunity for creating their own disk recordings. For Durham it seems, and for his group, Kitty, Daisy, and Lewis, analogue technology is not an obsolete technology but a means for producing a sound-quality lacking in the digital world and for reproducing a sound that is sympathetic to the jazzed-up Country music of the pre-Rock & Roll genre they make.

One can think of the equipment in this studio set-up as the audio equivalent of the work of Richard Nicholson. Nicholson presents a series of images of the darkroom. These images first and foremost act as documents for the steady demise of the darkroom but they also record these spaces as chaotic, often crammed full of photographic papers, and filters, and dog-eared stacks of photographs, and some miscellaneous objects, such as a ceramic shoe or a plastic figurine, and of enlargers of different sizes, with some mounted on tracks, and others perched precariously on shelves; and one notices the black paint peeling off the walls too. In some sense, the objects, the dolls, the boxes and the general disorderliness is a welcome antidote to the often-clinical surroundings of its digital counterpart. As in the case of the analogue sound, the so-called interference, the dust and scratches, has its visual equivalent in what might be called the clutter constituted by these objects.

Clare Mitton brings an incongruent element to this exhibition by making models of technology, such as mobile phones and film-projectors and computer keyboards, out of cardboard and coloured paper. What makes her work all the more disconcerting is the haphazard way she goes about constructing these objects: of the joins between surfaces showing, of the mobile-phone keys being of different sizes, of the cardboard warping in places, of the glue bleeding from underneath the coloured paper. But then one can read the haphazard construction as evidence of the involvement of a human hand; as something personal, rather than the machine-produced technological objects that speaks of cold precision and impersonal elegance.

This exhibition stands apart from other art exhibitions in so far it offers a platform for debate about the analogue/digital distinction, rather than presenting a collection of objects and images. 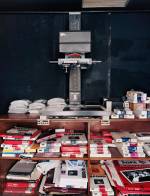 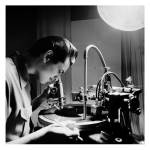 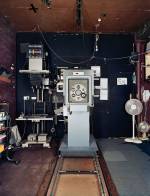 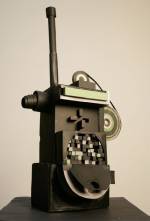 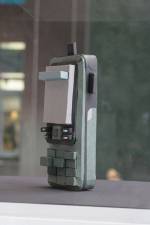