Sixties Iconoclastic Art and its Representation

Sixties Iconoclastic Art and its Representation

The Sixties, arguably, has been the most idealised decade to emerge out of the 20th century. And, more often than not, it has been romanticised by those who never lived through it. For the Sixties represents a time of cultural, artistic and sexual emancipation from what was seen as the straightjacket of tradition. This was a time of social unrest, when people literally took to the streets against the hollow political rhetoric of successive American administrations. Antagonism against conformity arose, most notably, from artists, musicians, poets and activists. Both Bobby Seale of the Black Panthers and the poet Allen Ginsberg raised their voices against social injustice, as did John Lennon and Yoko Ono. So, too, were censorships being uprooted, as in the cases of obscenity brought against Ginsberg's Howl, and DH Lawrence's Lady Chatterley's Lover.

This was a time of war, when newsreels showed helicopters casting sinister shadows across the hillsides of Vietnam, and young reporters were seen interviewing disillusioned and often frightened US soldiers. But this was also a time of peace: footage of festival upon festival showed gently swaying individuals with their fingers raised in the peace sign. In short, Sixties culture was built upon heterodoxical foundations.

Art was seen as a form of life, and life was seen as a form of politics, and by contiguity, art and politics intermingled. Ideas could be taken as things in themselves, or as things made tangible. But there was no prescribed way of making art. An idea could be performed, or painted, or drawn out in time by the bow of an instrument. The composer, La Monte Young, for one, broke with musical tradition by creating a piece entitled 'Composition 1960 #10', which consisted of a single written instruction: draw a straight line and follow it. This could be interpreted in different ways; for example, by playing a continuous note on a stringed instrument, or drawing and redrawing a chalk line across a floor. Similar pieces were being performed, particularly in loft spaces across New York, and it was these events that came to be known as the spirit of Fluxus. George Brecht, a New York-based composer, wrote the somewhat wry composition 'Piano Piece', in which a performer was instructed to place a vase on top of a piano.

If the term Fluxus championed anything, it was the interrogative: What is art? Why does it include these things, and not those? What does it mean to surpass the limits of art? Why can't composers express themselves visually, and vice versa? Yoko Ono was an artist at the heart of Fluxus, and in some respect, one of the artists who most embodies the Sixties artistic expression. For she not only produced works for gallery spaces, including the Indica Gallery in London, but she became a figure of notoriety when she and her husband, John Lennon, performed works such as 'Bed-in'. Many of Ono's early works were reminiscent of the later more public works. These early works, which had as their core the sparseness and poignancy of Haiku, were poetry delicately scented with innocent humour. In 'Tape Piece III/Snow Piece' (1963), she instructed the performer to record the sound of snow falling, not listen to it, but instead to cut the tape and use it to make string for wrapping gifts.

It was in the Indica Gallery in 1966 that Ono placed a ripe green apple on a clear perspex plinth and tautologically labelled the work Apple. This work appears again, this time in the current exhibition, 'Riflemaker Becomes Indica', at the Riflemaker Gallery, and is shown alongside works by the Boyle family, Michael Horovitz, Takis, François Morellet, Bernard and François Baschet, and a few current artists such as Conrad Shawcross and Juan Fontanive whose work resonates to the sound of the Sixties.

Takis's 'White Signals' (1966), which consists of three antennae crowned with red and blue lights winking in what seems to be a clandestine code, stand erect in one corner of a room. On the opposite wall, Juan Fontanive's two pieces, 'Blue Blood Cells' (2006) rotate, carrying upon their wheels hand-printed images on card, each constituting a single frame of an animation, depicting either people walking down a street or birds in flight. And all the while the sound of flapping card is heard to buzz like the beating wings of trapped insects.

In a room underneath, there are many thin rectangles of coloured plexiglass hanging longways from the ceiling, and as the viewer moves about them changes take place as the eye mixes new combinations from the lengths of primary and secondary colours. This is 'Transchromie' (2006), a work specially made for the exhibition by Carlos Cruz-Diez. Likewise, Jesus Rafael Soto investigates the constitutive character of perception when he creates pieces such as 'Quatre boites altuglass plexi sérigraphié et tiges métalliques' (1967), which consists of thin black ink stripes, some of which form squares, running vertically on three layers of plexiglass. To gaze at this work for any length of time is to perceive the presence of thicker illusionary lines flickering and moving across the field of vision. Liliane Lijn's 'Cosmic Flares III' (1966) is a work that respects the evanescent quality of shadows. Attached around a white frame are small lights flashing on and off in quiet rhythm, and as they do so they alter the greyness of shadows cast upon a white backdrop by the many semi-transparent dots puckering the plexiglass surface above.

Although the mood and context of the Sixties may not be present, this exhibition marks a point in time, and much to the gallery's credit, it does so without recourse to the prevalent nostalgia. 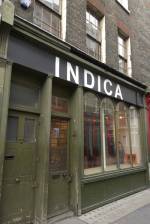 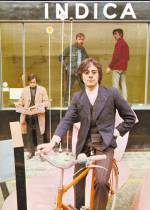 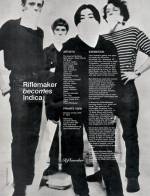