The autumn grand exhibition at Tate Britain is on the work of John Everett Millais (1829-1896), promoted as the greatest painter of the Pre-Raphaelite Movement. Millais is most notable to Pre-Raphaelite enthusiasts for the Scottish landscape painting in which he freely indulged at various times over the period 1870-1896. For Millais was to spend August in every year without exception of that period in the Perthshire Highlands of Scotland. Here he was close to his wife's family, yet avoiding for the most part their obsession with shooting and fishing. In that form of shooting-lodge living, the pursuit of painting was considered eccentric and relegated to the position of ancillary activity. The bonus for Millais, as these paintings reveal, was the scope of panoramic vistas beyond experience.

Many of the 'Scottish' works exhibited betray the traces of colonial aspiration: for instance, from Johannesburg Art Gallery there comes 'The Fringe of the Moor' (1874). From Auckland Toi o Tamaki Art Gallery comes 'Blow, blow, thou winter wind' (1892) and from Montreal Museum of Fine Arts comes 'St Martin's Summer' (1878). From Northern England comes Manchester's 'Winter Fuel' (1873) and from Liverpool 'Lingering Autumn'. This seems like an 'old pals reunion' and it shows the strength of colonial ties where cultural export was concerned. It is perhaps hard to concur with those who seek to allocate credit for any European influence by Millais or indeed any of the Pre-Raphaelites.

Millais of course was proficient in rendering seasonal foliage and capturing the slowly changing but unpredictable light in the Scottish context. But it is hard to put Millais into a context of considered response to the environment. 'Autumn Leaves' (1855-1856), painted in Perthshire, and 'Spring' (1856-1859) reveal a brush sweep afar from the dirt and dank of the cattle pass. Montreal's painting (above) depicts Corsey Hill in the Kinnoull Woods. Rather than wading through streams, Millais was networking here close by his parents-in-law's home, meeting up with Sir Henry Tate (Founder of the Tate Gallery) and facilitating that project, over which a firm friendship was struck up.

The painting 'Glenfinlas' (1853) is curious: it depicts a calm, reflective river landscape: For some reason a fisher (or 'rod' in the then sporting parlance) is casting his line to one side of the fast stream. However, the basket to receive the catch is on the other side of the flow, which is seemingly unfordable. One wonders if this is intended to symbolise some aspect of the intractable Ruskin guest (not a 'rod') and his marital difficulties with his wife, the daughter of the house, Effie. This was, we understand, after the Ruskins and Millais and his brother had all travelled North from London and the frictions became more apparent to Millais, who fell in love with Effie. The Ruskins soon after split up, and Millais married Effie. In that year too Millais began his portrait of Ruskin (in the exhibition), an urbanely clad figure poised or balanced between falling water and rocks as a hard place. This work was completed in 1854, the year in which the Ruskin marriage was annulled. Following this the Millais couple went to live for two years in Perthshire, close to her parents.

Effie was surely attractive and the inspiration for a number of Millais' paintings. What this exhibition reveals again is Millais' acute perception, not unsympathetic, of the plight of Victorian women. Millais' painting 'Ophelia' was of course, together with Holman Hunt's 'The Scapegoat', the favourite Pre-Raphaelite work. In the twenty-first century Millais' paintings have different meanings, differing interpretations from before. Effie herself had featured earlier, when still married to Ruskin, in 'The Order of Release' (1851). Here a lovelorn couple are seen reunited. Arguably in his mise-en-scène settings Millais treated surroundings like clothing, as an extension of the personae. It was all an elaborate stage set. Where, he might have asked, was the reality?

One is bound to investigate the famous painting of 'Bubbles' (1886). Here Millais moved even further from reality, into sugar and spice and the land of the smoothie. However well-executed in commercial art standards, he already seems to have his tongue in his cheek. Millais was by then the victim of sustained affluence and fame. 'Bubbles' was ruthlessly used to market soap. If this marked a possible entry of the Pre-Raphaelites into popular art, it was perfect for the task, but it did nothing for Millais' reputation.

Apart from the Scottish Landscapes, so assiduously assembled by the curators, the event of the assembled portraits from the 1870s and 1880s is surprising and dramatic. The portrait of Thomas Carlyle is notable, but that of WE Gladstone somewhat wooden. By contrast, that of Benjamin Disraeli was probably flattering and seems authentic as well. Earlier portraits exist by Millais, such as 'James Wyatt and his granddaughter' (1849) and 'Mrs James Wyatt Jr and her daughter', which seem very natural as early work might. In a family context, the portraits of Effie (as in, for example, 'The Order of Release' and again in 'Autumn Leaves') are inspiring, as indeed the painter must have found the model. It is a pity that more of Millais' work was not equally inspired. 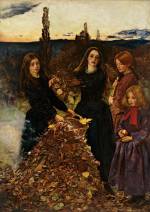 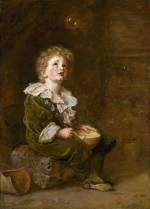