In terms of the appraisal of his work, 'Edgar Degas: The Last Landscapes' is a revelation. The landscape works are themselves masterly, but in the curating of the show it is possible to appreciate the full extent of his exploration and achievements in other media. His work in oils, pastels and watercolours is well known. Less well known is the extent to which he committed himself to the monotype and, indeed, became the most innovative practitioner of his time. The monotype is a print made from a metal plate, on which a painting is applied. Degas used the technique in a highly original and flamboyant manner, smearing and spreading the paint dramatically over the plate, using anything from rags to the pointed end of a brush and his hands. He spattered paint to give the effect of weather, and was the foremost practitioner of the monotype in the 19th century. The landscape monotypes, often overlaid with pastel, are perhaps the most spectacular works of his entire career. Degas made several hundred monotypes, enjoying the element of chance, the 'accidental' aspect of the process. Degas also modelled in wax a number of 'provocative modernist works'.2 He did not cast them, however, and exhibited only one of them. In terms of accomplishment, Degas' most unexpected medium was photography. Studied alongside his pastels and paintings, they reveal a wide range of technical and formal preoccupations. Given that photography was relatively new and experimental, he produced many remarkable photographic images. This exhibition, then, is full of the unexpected - unexpected choices and subject matter.

'Edgar Degas: The Last Landscapes' owes its inception to the singularly independent collection established by Howard and Babette Sirak. Seventy-eight works from their collection were bequeathed to the Columbus Museum of Art in Ohio. Beginning in 1964 soon after they were married, the Siraks assembled a collection of Impressionist and Modernist works. They chose unusual works, one of which was 'Houses at the Foot of a Cliff' (c. 1895-98), which they proudly described as their mystery painting. In turn, it formed the genesis of the present exhibition and book, produced by Merrell Publishers and the Columbus Museum.

'Degas, The Secret Landscapist' by Ann Dumas, who curated the show, reveals that, following Degas' academic training, he made the customary trip to Italy. While most of his notebook sketches were of the figure, there were many landscape drawings, as well as copies of Renaissance masters; Degas spent three years travelling and working in Italy. He admired the painting of Corot in particular. Degas made numerous small oil paintings on paper, in Italy in the 1850s. These early works showed his interest in landscape but his overriding ambition was to become a major history painter and to show at the Salon. An early and well-known example of Degas' history painting is 'Young Spartans Exercising' (1860). When one views it now, with the recently revealed knowledge that Degas was an accomplished landscapist, it is possible to appreciate a sense of space within the picture plane that is informed by his landscape preoccupations. Likewise, the racecourse paintings of Degas such as 'At the Racecourse' (c. 1860-62), are greatly informed by his understanding of the wider visual field. Degas' monotypes of landscapes, sometimes layered with pastel, reveal a complex and lively working process. They have a range of textures and moods; numerous images are spontaneous symphonies of colour, without the pretentious explanations that accompany some theories on abstraction that proliferated in the 20th century. 'Twilight in the Pyrenees' (c. 1890-93), a colour monotype, and 'Squall in the Mountains' (1890), a monotype in oil colours on cream paper are small symphonies of muted colour, extremely evocative images. The Merrell publication reproduces these beautifully in a very handsome, well-priced (£19.95) book.

In his catalogue essay, 'The Battlefield of Landscape: Degas and Radical Impressionism', Flemming Friborg points out that, around 1890, the landscape genre dominated the rapidly expanding art scene. Degas could not therefore remain a figure painter alone. Impressionism by then had lost some of its initial verve.

Degas had considerable experience in printmaking. The process of monotype suited Degas who could work with speed and fluidity, and make alterations. Chance played a vital role, where technical skill was of secondary importance. The finished product was Degas' primary concern, and the freedom to work interactively with oils, pastels and printmaking techniques. Degas' landscape works were liberating in terms of being able to depart from the documentary or merely sensory and favour the integration of the imaginary. In this, he shared the aims of Paul Gauguin whose symbolically charged landscapes marked a radical departure from the Impressionism of the day.

There are obvious visual connections between Degas and Turner. Degas was familiar with Turner's work and admired those in the possession of his friend, Camille Groult, who owned 'Landscape with a River and a Bay in the Distance'. 'Degas may have felt an appealing sensation of a grandiose classical tradition of landscape in the work of Turner. The interest in a heroic landscape tradition would be consistent with Degas' determination to make more out of Impressionism than just decoration and airy moods'.3

The most exciting aspect of discovering Degas' landscapes is perhaps the new way in which his late dancer paintings can be viewed. No longer just dancers, paintings such as 'Russian Dancers' (c. 1899) unite with his landscapes to reveal the grander aspirations of this remarkable artist. It is interesting to note in this context, that at the time of his death, Degas' own collection was significant and surely informed his own extraordinary oeuvre. He himself owned several Old Masters and mostly 19th-century French works. He had, for example, 20 paintings and 88 drawings by his teacher, Ingres, and 13 paintings and 129 drawings by Delacroix. Of his contemporaries, he owned works by Corot, Manet, Van Gogh, Cézanne and Gauguin. 'Degas' radicalism lies in the cross-fertilisation of genres, their merger on behalf of a new realism. He struggles to create a painterly representation of the world that is contemporary and modern in the most self-consciously avant-garde sense of the word. Degas aspires to reach beyond Impressionism as a landscape genre and to find a position in which the little matter of genres no longer applies.'4 This is a tremendously important exhibition with a publication that does it justice. 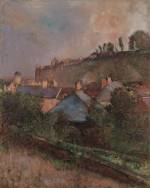