The loss of faith in humanity in the late 1940s was such that the human image in art became increasingly difficult to portray. The existential despair expressed by Jean-Paul Sartre in Nausea (1938),1 found a visual counterpart in the images of despair and alienation of Francis Bacon, the expressionism of Oskar Kokoschka and the apocalyptic visions of Arthur Boyd. For the most part, abstraction in the visual arts dominated because, after the horrors of Auschwitz, Hiroshima and Nagasaki, artists found images of humanity impossible to create.

'Francis Bacon: Portraits and Heads', in Edinburgh during summer 2005 to coincide with the Edinburgh International Festival, leaves one in no doubt as to the importance of the potent nihilism of one of Britain's most important artists. John Berger, formerly a harsh critic of Bacon, recently described him as the 'prophet of a pitiless world':

He repeatedly painted the human body, or parts of the body, in discomfort or agony or want. Sometimes the pain involved looks as if it has been inflicted; more often it seems to originate from within, from the guts of the body itself, from the misfortune of being physical.2

Images of the abyss, of loneliness and the inescapable suffering of human existence dominate the exhibition, and yet, the 50 paintings at the Scottish National Gallery of Modern Art stress the dialogue that existed between Bacon and his subjects, and the wider world. In establishing the dialogue, it is possible to experience these images beyond the hideous, expressionistic despair. This is partly because, since the artist died in 1992, sufficient time has passed to make a revision of the significance of his work. In spite of the bewilderment that most of Bacon's portraits express, there is an unexpected affirmation in the choice of formal language and the precision and care applied to the act of painting: the placement of each head, each brush stroke, every subtle hue, the manner in which the figure inhabits the space, the form within the picture plane. There is a common purpose for human existence established in the tradition of portraiture, the primal act of painting that links him in formal terms to the Old Masters, and to the history of art itself. A quiet authority is established by the artist amid the shrieking pain; the curators have echoed this in the elegant hanging of the works and the subtle interconnection of the works within the whole exhibition.

The critic, John Russell, described 'Bacon's Heads' from an existential standpoint as 'a knowing inversion' of what we usually understand by portraiture:

Looking at them, we realise that although European painting includes a great many portraits of individuals in rooms, they are never about what it feels like to be alone in a room: the painter always makes two ... The garbage of the psyche has been put out at the back door; all buttons are done up ... What painting had never shown before is the disintegration of the social being, which takes place when one is alone in a room which has no looking glass. We may feel at such times that the accepted hierarchy of our features is collapsing, and that we are by turns all teeth, all ear, all nose.3

Francis Bacon was born in Dublin, in 1909. He spent most of his life in London, working as a painter from the 1930s. The human figure was central to his work throughout a long and productive career. He died in 1992. No other painter delivered as potent a message of nihilistic despair as Francis Bacon in Britain in the 1940s and 1950s. Viewing Bacon was a mandatory but oppressive experience. His work was truly shocking:

Bacon was a very overt atheist. Maybe this seems irrelevant, but you only have to visit an Old Master painting collection - such as the Doria Pamphilj palace, in Rome, where the Velázquez portrait of Pope Innocent X that obsessed Bacon can be found - to see that oil painting and religion are intimates. All the Madonnas, all those popes. Bacon took the spiritual heart of high culture and stuck a knife right through it.4

The Vatican never openly condemned Nazism. Yet, to place the Pope in a glass booth with a howling face and the top of his head missing was more than just a departure from tradition - it was a Judgement Day with a personal vendetta. Hieronymus Bosch made apocalyptic images where humanity en masse was condemned, but Bacon takes the traditionally edifying form of portraiture and slashes it. His disturbing image is like the burning of a very lifelike effigy, leaving one feeling physical revulsion.

The Edinburgh exhibition (it will travel to the Hamburger Kunsthalle this autumn) begins with small single heads from the late 1940s. In these works, the act of painting is immediately felt: the beautifully balanced shapes, the simultaneously interlocking and falling away of forms. The movement and the silence evoked so allude to individual character and to ephemeral emotional states as to be disconcerting. In the small heads, the apparent despair gives way to intimacy and even trust. These are moments caught by impeccable painterly techniques. A likeness to the sitter or individual (for they were often based on photographs, not sittings) is captured in spite of the obvious distortion of features. Bacon exposed the fragility of the individual (especially his friends and lovers), transient moments, and the weakness of flesh. He exposed mortality itself.

There follows a group of large single portraits; some are full length. The core of the exhibition comprises small heads of friends from the artistic and social milieu of London's Soho - Lucien Freud, Henrietta Moraes, Isabel Rawsthorne, and Bacon's lovers Peter Lacy and George Dyer. From 1961-62 the portraits are often in triptych format, which enabled Bacon to reveal three aspects of the one individual. 'Bacon compared his small triptychs to 'police records' in which the suspect is photographed in three contrasting positions - right profile, full-face and three-quarter view (left side)'.5 Peter Lacy, with whom Bacon had an often dramatic relationship, dominated the portraits of the late 1950s. Five portraits of Lacy are included in this exhibition. 'Self-Portraits', which date from the 1950s, reveal a range of images of self. In 1975, Bacon told David Sylvester, 'I loathe my own face, but I go on painting it because I haven't got any other people to do'.6

The Edinburgh exhibition includes important loans from many public and private collections. It was selected by Andrea Rose, Director of Visual Arts at the British Council; Richard Calvocoressi, Director of the Scottish National Gallery of Modern Art; and Christoph Heinrich, Chief Curator of Contemporary Art at the Hamburger Kunsthalle. Richard Calvocoressi's searching essay, Bacon: Public and Private, examines recent scholarship since Bacon's death in 1992. It has revealed the sources of his imagery and examined his work in the context of 'European high culture'. Calvocoressi lists Michelangelo, Velázquez, Rembrandt, Ingres, Degas, Van Gogh and Picasso as the artists Bacon appropriated and assimilated. 'The motifs and subjects that obsessed him were: papal imagery; curtains and veils; the open mouth; the cage; circular forms, spaces and structures; the male human body; portraiture; mirrors and reflections; the shadow; the Crucifixion; meat and flesh'.7 Bacon also used 'low art' sources: photographs, magazine cuttings, newspapers. He used the sequential photographs of Eadweard Muybridge, 'The Human Figure in Motion' (1887).8 The moment, the chance pose or fluid movement interested Bacon and led him to develop portraits of a fleeting glance or nuance of expression.

'In other words', Calvocoressi observes, 'Bacon, who lacked the traditional art-school training of painting or drawing from a living model, found that photographs had already done some of the work of translating three-dimensional form into two-dimensional form for him'.9 Commissioned photographs of friends became aides-memoires. He felt less inhibited when he wanted to distort their faces when they were not present. Sylvester's highly esteemed Interviews with Francis Bacon (1975) became a key source to understanding the complex artist. Sylvester more recently revealed that contrary to the impression given by the artist himself, Bacon did, in fact, do preliminary studies. In one of the later interviews Bacon revealed his aims in painting:

The living quality is what you have to get. In painting a portrait, the problem is to find a technique by which you can give over all the pulsations of a person ... Most people go to the most academic painters when they want to have their portraits made because for some reason they prefer a kind of coloured photograph of themselves instead of having themselves really trapped and caught. The sitter is someone of flesh and blood and what has to be caught is their emanation.10

The theatrical nature of Bacon's work is accentuated by formal devices such as his use of the triptych and linear transparent enclosures around figures. 'These paintings are the equivalent in visual art of Bacon's great post-war drama contemporaries - he is the Beckett, Ionesco or Pinter of art'.11 The spotlight in 'Portrait of George Dyer in a Mirror' (1968), places him firmly on a stage, a theatre of the absurd. The mirror resembles a painting or even a television screen - art as performance, communication in various forms. Bacon considered that those who found his portraits shocking or offensive, were themselves, cocooned in fantasy, in a world unable to confront uncomfortable truths. He expanded this point:

When I look at you across the table, I don't see you but I see a whole emanation, which has to do with personality and everything else. And to put that over in a painting, as I would like to be able to in a portrait, means that it would appear violent in paint. We nearly always live through screens - a screened existence. And I sometimes think, when people say my work looks violent, that perhaps I have from time to time been able to clear away one or two of the veils or screens.12

Time has played a part in the recognition of Bacon's complex work, as extended by recent world events, where the confrontation of terrorism has questioned of our faith in humanity anew. 'Francis Bacon: Portraits and Heads' is a major exhibition and with the excellent catalogue, succeeds in establishing a heightened awareness into the work of a true prophet. 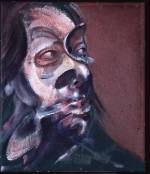 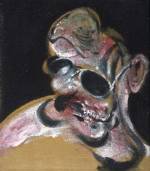 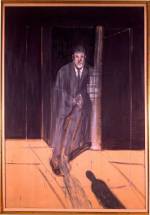 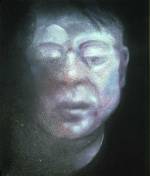 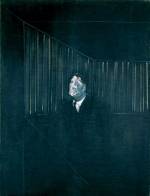