Ed Ruscha’s oeuvre has been canonised as the output of a modern American master, but it shrugs off the labels that usually accompany such elevation: certain works or sequences are aligned with pop or conceptual art, but the majority resist such designation. Another apparent incongruity concerns form and content: Ruscha is often invoked in the same breath as Los Angeles, the city which been his home since 1956 – yet his most enduring concern has been not with places but with words, and the ways in which their meaning can be attenuated, inverted or reinforced by their material form.

The Hayward show offers little to resolve these paradoxes, which have sustained the artist for half a century, but it does offer a long view on his experiments with paint and letters. Whilst some of the early pop paintings such as Box Smashed Flat (Vicksburg) 1960–61, with its literal rendering of a flattened Sun-Maid raisin box, proclaim the new consumerism in full frontal glory, the most iconic of Ruscha’s works from this era, such as Large Trademark with Eight Spotlights 1962 and Standard Station 1966, offer their subjects at an extreme slanted perspective. The low angle and the onward rush of the 20th Century Fox logo or the Standard gas station speak of movie screens and endless roads: the subject matter of LA is implicit in their very design. When Ruscha sets fire to the station, in the painting Burning Gas Station 1965–66, the flames bring with them the whiff of West Coast counterculture, at a time of intensifying US involvement in Vietnam. Ruscha has consistently downplayed the political in his work, however, claiming that the same flames sprouting from the Los Angeles County Museum of Art on Fire 1965–8 are ‘really like an after-statement – like a coda, as in a coda to music’.1

These are visions of manifest destiny speeding towards conflagration (little wonder that J.G. Ballard praised the coolness of Ruscha’s gaze), but running in parallel with this is the obsession with text and typography. This takes a new turn in the late 60s when the artist starts painting words with trompe l’oeil accuracy, as if they had been formed from unknown liquids on equally ambiguous flat surfaces. Here, as Yve-Alain Bois has noted, liquidity is the medium for the annihilation of language and thought; the words are ‘in the process of becoming blots, stains, spots’.2 In the early 70s, blots and spots became a literal part of Ruscha’s work, as he began looking beyond paint and the illusions it could create, to the possibilities held by less conventional materials. Sphere of Pepto-Bismol 1972 is a rigorously accurate title, whilst other paintings use shellac or egg-yolk to spell out punning phrases.

At this point, the decision to only include paintings in the exhibition begins to feel like a restriction: Ruscha’s experimental colourings began in book form, with the print portfolio Stains 1969, which brought 75 kinds of stain together in one box. These book works, which were crucial to Ruscha’s reputation as an early conceptualist, formed a significant part of the artist’s production around this time: Royal Road Test and Thirty-Four Parking Lots in Los Angeles were published in 1967, whilst one year earlier Ruscha had used a motorised camera mounted in his car to produce Every Building on the Sunset Strip. This work predated and influenced Learning From Las Vegas, a seminal investigation into signs, facades, architecture and automobiles by Robert Venturi, Denise Scott Brown and Steven Izenour.

As the exhibition continues, the words that Ruscha uses lengthen into enigmatic phrases, such as ‘the study of friction and wear on mating surfaces’, or ‘honey... I twisted through more damn traffic to get here’. These gobbets of speech are forms of readymade, evoking the ghost of Marcel Duchamp. In 1982–3, Ruscha was lionised in a major touring US retrospective, and the large commission that followed, for the Miami-Dade Public Library, necessitated a move to a new, larger studio where the artist started to work with an airbrush. As this new technique replaced the laborious building up of brushstrokes, ‘lights, shadows and fog’ began to dominate the canvas, as Mary Richards has noted.3 Whether derived from film noir or the everyday smog of commuter traffic, this nebulous atmosphere is as redolent of LA as anything Ruscha painted in the 60s. This tone persists through a set of wordless ‘silhouette’ paintings, and into another series painted in the early 90s. These works, which mark an explicit return to the cinema as subject matter, are given titles such as Exit 1990 and The End 1991, underlining their sombre mood. The latter is painted with the scratches and vertical lines of old celluloid, as if the viewer were watching a battered film grind to its conclusion, and a similarly melancholy and nostalgic air attends one of the last series in this exhibition.

Painted for the 2005 Venice Biennale, Ruscha’s Course of Empire sequence pairs earlier paintings of ‘blue collar’ buildings with new versions of the same scene, in a vision of industrial decay. Blue Collar Tech-Chem 1992 is confronted by The Old Tech-Chem Building 2003: the modernist box of a factory remains, but the sign has gone and ‘Fat Boy’ is now emblazoned across its front. This series lies somewhere between realist social commentary and a hallucinatory referencing of the painter’s back catalogue, proving that Ruscha’s work is still as hard as ever to pin down. 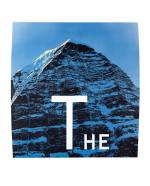