Classified, a new collection display at Tate Britain, draws on the Tate’s own collection of contemporary work to disrupt and delight in a similar manner to Borges’s encyclopaedia

The Order of Things, Foucault’s archaeological excavation of the changing systems of European thought, opens with a quotation from Borges. The Argentine fabulist cites a “certain Chinese encyclopaedia” in which all animals are divided into the following categories: “(a) belonging to the Emperor, (b) embalmed, (c) tame, (d) sucking pigs, (e) sirens, (f) fabulous, (g) stray dogs, (h) included in the present classification, (i) frenzied, (j) innumerable, (k) drawn with a very fine camelhair brush, (l) et cetera, (m) having just broken the water pitcher, (n) that from a long way off look like flies”.1

As Foucault writes, the laughter that this series induces shatters the familiar landscape of thought, “breaking up all the ordered surfaces and all the planes with which we are accustomed to tame the wild profusion of existing things, and continuing long afterwards to disturb and threaten with collapse our age-old distinction between the Same and the Other.”2 Laughter is figured here as something like an earthquake, set off unconsciously but bringing to our attention the fault lines of our era’s systems of thought, the very assumptions that make our ideas possible. The laughter, in part, is laughter at the impossibility of thinking like that.

‘Classified’, a new collection display at Tate Britain, draws on the Tate’s own collection of contemporary work to disrupt and delight in a similar manner to Borges’s encyclopaedia. The first room features Mark Dion’s Tate Thames Dig (1999), which presents, in an old-fashioned display cabinet, objects gleaned from the artist’s excavations of the riverbanks in front of the Tate buildings in Millbank and Bankside. The assembled miscellany was ordered by Dion into categories that defy archaeological order in favour of considerations of form or colour, so that a collection of plastic bottle tops describe a spectrum from red to violet, or an entire drawer is filled with scraps of rusty iron. As further drawers are slid open, their contents reveal unexpected juxtapositions of ‘natural’ and ‘cultural’, as discarded cigarette lighters shade into fragments of animal jawbone. This method of placing side-by-side links the work even closer to the 17th- and 18th-century wunderschränke or cabinets of wonder, which constituted, as Barbara Maria Stafford has argued, “a drama of possible relationships to be explored” and an invitation to “experiment with order and disorder”.3

The simplest form of collection is the list, which harnesses the abstracting power of words to bring objects together in what Foucault calls the “non-place of language”.4 Yet certain kinds of list still retain a privileged relationship to the world of things and transactions – and one of these is the supermarket receipt. Ceal Floyer’s Monochrome Till Receipt (White) (1999) functions in this way, as a list of white objects bought in a supermarket, but also as the documentary guarantee of a performance: that on such-and-such a date a curator went to Morrisons and bought rice, tofu, pickled eggs, Savlon, and haddock from a bemused cashier. Our everyday relationships with words and things are revealed in all their strangeness in this slip of paper pasted to the gallery wall.

Simon Starling is particularly adept at bringing out the hidden biographies of everyday objects, and inserting his own actions into the labyrinthine processes of production that underlie quotidian consumer goods. His Work, Made-ready, Les Baux de Provence (Mountain Bike) (2001) sprawls across an entire room, laying out the material remains of a labour-intensive process. This involved cycling an aluminium-frame mountain-bike to an abandoned bauxite mine, and carrying out in a home workshop the industrial refinement of the ore he gathered there. The final product of all this labour, hammering, crushing, and application of chemicals and electricity, is an incomplete recreation of the bike’s aluminium tubing.

The next room is dedicated to contemporary painting and sculpture, with works by Gillian Carnegie, Fiona Rae and Rebecca Warren, amongst others. The most interesting of these, from the point of view of collecting and classifying, is probably Warren’s trio of vitrines. Recent visitors to Tate Britain may have seen them before, but this work, entitled In the Bois (2005), repays another look.  Inside her ramshackle perspex and wood constructions, a series of mute dramas are played out, as absurdly delicate shavings of wood and fishbone-thin plastic tags correspond with cubes of expanded polystyrene, which glow luridly in the light from twists of fluorescent tube. They provide a futuristic counterpoint to Dion’s work, as if involved in a last-ditch attempt to make visible the unexpected beauty of scraps of industrial ruin.

The exhibition is completed by a moving film by Tacita Dean, a near-silent portrait of the poet Michael Hamburger and his collection of different varieties of apple trees, and installations by Damien Hirst and Jake and Dinos Chapman. Whilst the brothers’ Chapman Family Collection(2002) is a fairly crude satire of ethnographic collections, the display as a whole provokes more subtle reflections on how collecting and ordering invisibly structure the world around us. 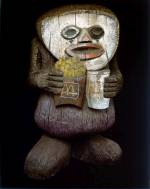