In conversation with Tim Marlow, director of exhibitions at the White Cube, Anselm Kiefer mentions the importance of the concept of the remnant to his recent work:

If you do a semiological study of the Old Testament the words ‘remain’ and ‘remnant’ occur over and over again. God declares: ‘I will destroy these people... but there will remain a small number, a remnant’. [...] This brings us to the idea not of linear time but of cyclical time.1

The idea of the remnant is also closely associated with the apostle Paul, who reactivated its use by the prophets, citing Isaiah: “Though the number of the Israelites be like the sand by the sea, only the remnant will be saved” (Romans 9:27). The philosopher Giorgio Agamben argues that this notion of the remnant is not to be understood as “a numeric remainder or portion”, nor as “outright identical to Israel”, but rather as “the impossibility for the part and the all to coincide with themselves or each other”.2 He relates this to the new messianic division Paul instituted – between ‘flesh’ and ‘breath’ – which cut across the traditional division, which Jewish law made between Jew and non-Jew (am and goy). This division of divisions is politically significant today, Agamben claims, because it allows a new perspective on the notion of a ‘people’, who as “neither the all nor the part”, cannot be designated a majority or minority, but instead is “that which infinitely remains or resists in each division”.3

This may perhaps seem like a roundabout way of coming to Kiefer’s new paintings of great ziggurats of bricks, but it connects directly to the theological and political concerns at the heart of these works. The direct sources for the paintings may be rural brick factories in India, where piles of mud bricks are stacked in great pyramids and fires lit inside to bake them, but the resonances of are of ancient civilisations, and destruction on a Biblical scale. The bricks are taken away as required for new buildings, and these sites of destruction and collapse are therefore testament to construction happening elsewhere. For Kiefer, this also has theological resonances: he also quotes Isaiah from the Catholic liturgy of his childhood, “Let the earth be opened and bud forth a saviour and let justice spring up at the same time”.4 Just as the Pauline remnant figures as that which comes between “every identity and itself”,5 so these paintings are a sort of spectral hallucination of ancient monumental architecture, conjuring through their names the great cities of Heliopolis or Aschkelon, and causing a disjuncture between the past and present of these places.

In an entirely different though not unrelated context, Paul Virilio has written of the “actual archeological break” he experienced when coming across the abandoned fortifications of the Atlantic Wall during his youth,6 and a similar sense of time-shift permeates these works. Yet whereas the self-sealed and monolithic bunkers reflect both the fascist ideology that gave rise to them and the new climactic reality of total war, the openness of Kiefer’s brick structures, to the elements and to their own incompleteness, offers hope in destruction. Just as the remnant is the instrument of salvation, through which the all will be saved, so these paintings speak of hope and renewal as much as of violence and what Simon Schama calls in his catalogue essay the “abrasions that power scores into the earth”.7

This openness is not simply representational, but is inherent in the materiality of these paintings. Paint, terracotta clay and sand are heaped on the canvases in layers so thick that they crack as they dry. The interior of the painting opens like a dry river bed, or like peeling bark. In one painting, Shevirath Ha Kelim (2009), the broken pots to which the title refers spill out of the painting and around the gallery floor. Kiefer cuts across the division between inside and outside, creating an almost sculptural space for these canvases.

The Hoxton Square gallery contains four large paintings from the Fertile Crescent series. Meanwhile, across London at the White Cube’s Mason’s Yard outpost in Piccadilly, another Kiefer series is on show. The Karfunkelfee paintings depict dark forests filled with thorn bushes, and although they appear at first to have little connection to the works in Hoxton Square, they take their name from a supernatural figure, a fairy, who figures in a poem by the Austrian poet Ingeborg Bachmann. Bachmann, and her relationship with Paul Celan, is present as another historical layer in the Fertile Crescent paintings; one of them is named, in reference to Celan’s first collection, Für Ingeborg Bachmann: der Sand aus den Urnen (For Ingeborg Bachmann: The Sand from the Urns). 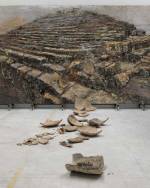