'The Chief' stares from posters advertising 'Africa Remix'. He sits on a cheetah skin upholstered armchair, in a room decked with garish nature prints, wearing a leopard skin loincloth and scarf, a jeweller's window of gold chains and a Mobutu-style conical fur hat. Instead of a royal sceptre, he holds a bunch of sunflowers and his inevitable celebrity sunglasses are made of white plastic. He looks like the love child of Dame Edna Everage and Emperor Bokassa (the psychotic dictator of the Central African Empire who, in 1977, spent his country's entire gross national product on his own elaborate coronation). 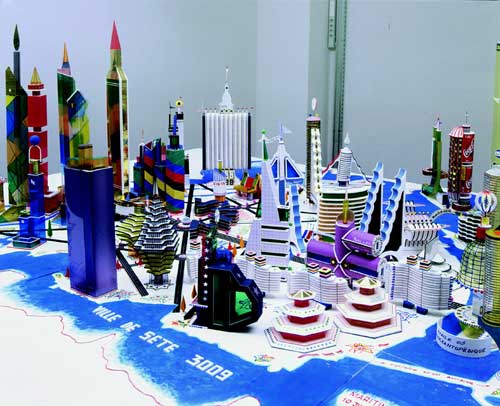 Samuel Fosso's self-portrait 'Le Chef' (2003) is mordantly subversive of both Western and African self-delusion: presidents who affect the costume of tribal chiefs; foreign leaders misty-eyed at grateful, dancing natives in colourful ethnic dress; European art critics full of patronising enthusiasm for their 'native primitivism'. Fosso mocks the complicity of Sorbonne and Oxbridge educated dictators who strip Paris boutiques to their bare walls, visiting dignitaries who are actually part of an arms sales delegation and dancing natives who are really students, moonlighting in fancy dress for beer money. At 'Africa Remix', native, primitive artisans are thinner on the ground than doctorates in fine arts.

A visitor to the Hayward Gallery might assume that contemporary Africa has a hotline to British art. There are rows of anonymous faces, reminiscent of Anthony Gormley, and Chapman-esque chimeras - animal heads on human bodies. There are also photographs of pickled elephant foetuses, beach huts, video self-portraits of intensely personal revelations, printing on every conceivable surface, computer image manipulation and even painting (which seems to be acceptable again). However, if you look at the dates of the works, it becomes clear that Africans have not been slavishly following the winds of change emanating from London, Paris and New York. In Africa, 'high concept' art has taken its own direction and matured into a potent force. So much of our home-grown conceptualism engenders banality, trivial issues, incomprehensible responses and overblown rhetoric - obscurity as an end in itself. In Africa, artists still believe they can change the world.

To a contemporary London audience, automatic weapons welded into chairs and a four metre model of the Eiffel Tower may seem unsophisticated. However, when the artist - in this case Goncalo Mabunda - lives and works in Mozambique, the machine guns are not metaphors but an emblem of failure involving domestic leaders, aid agencies and Western governments.

For me, the assemblages at 'Africa Remix' are the most moving and significant pieces. In the USA and Europe, the creation of art from found objects is an amusing commentary on our disposable society. In most of Africa, junk is valuable. Broken appliances that are thrown away in Britain are shipped to Ghana in vast quantities. Thriving businesses repair and resell refrigerators, washing machines, radios and mobile phones. A sheet of tin is not rubbish, but the wall of a house. Beninese artist, Romuald Hazoume, has made a tower of some 70 large oil cans, each painted with a name or unique, identifying symbol and formerly a valued possession. One of the cans is cut open and has a passport inside. Far from being useless objects, oil cans containing water symbolise life - but in being carried by women for miles, they also signify inferior status.

Congolese artist, Jean-Baptiste Bodys Isek Kingelez and Kenyan-born Allan deSouza exhibit thematically similar pieces. With his 'Projet pour le Kinshasa du troisième millénnaire' (1997), Kingelez has produced an architectural model of a fantasy new cityscape in the year 3009: brightly-coloured skyscrapers, immaculate, broad boulevards, clean rivers and centres of culture and sport. The contrast with the reality of Kinshasa is shocking, as is the way in which development plans for the city have been abandoned over the years. The Democratic Republic of Congo (formerly Zaire) has been devastated by Belgium, former presidents Mobutu Sese Seko and Laurent Kabila and two decades of civil war, but there is still a wonderful feeling of optimism about the work.

Ghanaian artist, El Anatsui builds huge 'blankets' (10-29 square metres) from flattened bottle tops and cans. When draped over trees and geological features (similar to a Christo installation but more personalised), they are like a delicate new life form. With very welcome foresight, the British Museum has now also acquired one of these works.

South African artist, Willie Bester has constructed a truly menacing, muzzled doberman from recycled car parts. The 'dog' conveys all the terror and violence of apartheid; but the man who holds its chain is not white - he is an army officer with African features, surrounded by missiles, mines and grenades. One oppressor simply replaces another.

Arabic-speaking North Africa - racially and culturally distinct to the rest of the continent - is represented principally by photography and video installations. Political art thrives in Morocco, Algeria and Egypt, and the artists are courageous in their choice of subjects, which range from the oppression of women, to torture and state violence, to revealing scenes of domesticity. When the rest of the world sees in Africa only disaster and disease, we can forget that real artists continue to make art as a positive part of their everyday lives.

The first Oxford African Encyclopaedia, published in 1974, dedicated six paragraphs to African art and ten to Western art. The continent's influence may be recognised, but rarely is African art considered seriously on its own merits. When art historians try to look at Africa, they cannot see past the Benin bronzes - for them, African art stopped in the 15th century.

'Africa Remix' is an important attempt to correct the idea that African art has been dead for over 500 years. This is the largest exhibition of contemporary African art ever to visit Britain (via Dusseldorf and on the way to Paris and Tokyo). It is also over 15 years since the 'Magiciens de la Terre' exhibition at the Pompidou Centre in Paris alerted the European cultural elite to the fact that the continent had long ago advanved beyond tribal art, such as wooden masks, votive figures and fertility gods. The only note of regret is that the London version of the exhibition is rather small and that due to a lack of space, several objects have been omitted - although the exhibition does at least feature photographs of these works. 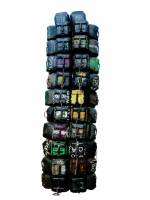 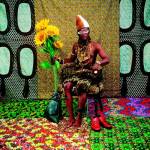