Robin Rhode. Who Saw Who and Through the Gate

Robin Rhode is charting new ground as a talented, mixed-race South African artist, who pushes the boundaries of drawing in spontaneous and interactive performances, which are recorded by photography and film. Raised in Johannesburg, he has sketched on the walls and streets of one of the world's most dangerous cities in front of passers-by. 'It was a political decision to create artworks in public spaces. My use of chalk and charcoal related to economic choices. It was about the role of the audience,1 he explains. He has perfected his skateboarding tricks and achieved an impossible basketball slam-dunk in voids of the city. Graffiti and hip-hop inform his urban practice as much as the theatre and jazz associated with silent films of the 1920s influence his gallery-based improvisations. Although his work is playful, he hints at serious issues such as urban poverty, violence and personal freedom in the shadow of imperialism. These diverse strands emerged at the coincidence of Rhode's first solo UK exhibition at the Hayward, 'Who Saw Who',2 and his show at the White Cube, 'Through the Gate'.3

The Hayward’s ten-year survey looked at the origins of the artist’s practice in the palimpsest of childhood memory, in spaces cleaved by racial tension during the years when ‘coloured’ people were segregated under apartheid rule. In the animation New Kids on the Bike (2002), two boys appear to cling onto a chalk bicycle, with papers trailing from their backpacks, in a re-enactment of the kind of initiation rite that Rhode experienced at school. The neglected backyard of his mother’s home provides the setting for the photographic sequence Stone Flag (2004), in which the white-suited and floppy-hatted artist waves a flag composed of red bricks. The dog-urine stained landscape turns into a canvas of cultural memory, on which the figure alludes to the attempts of Russian Constructivists to keep the red flag flying, and to the utopian, communist ideals of graffiti and poster art that adorned revolutionary Johannesburg during the 1980s and 90s as the nationalist movement gathered pace. ‘My intention was to allow the bricks to defy gravity, making the objects look lighter, softer, like a silk flag blowing in a gust of dust,’ he says. ‘The bricks become a metaphor for construction and building, while touching on ideas of violence and vandalism.4

The ability of the Berlin-based artist to evoke the past by situating himself in the present can be observed in his ephemeral practice abroad. During 2005, he held up an umbrella to catch a darkening shower, as followed the Hiroshima atomic bombing, in Untitled (Hard Rain), and his colourful person tugged with all its strength at a chalk anchor along a slipway wall of an old reservoir in the Canary Isles. More recently, he has directed a doppelgänger in black-and-white films, with a nod to the practice of Marcel Duchamp whose alter ego was Rrose Sélavy. The artistic device can be seen in Brick Face (2008), where a top-hatted figure at a sewing machine weaves a geometric textile that overcomes an empty wall, as though it is an organic entity. Rhode increasingly carves a pocket of freedom by removing himself entirely from the frame. In Kite (2008),5 a diamond-shaped film screen of trees racing past on a drive by the levees of New Orleans, held in place by the drawing of strings, he invites us to assume an optimistic, youthful vision of nature despite the harrowing floods of recent memory.

In ‘Through the Gate’, Rhode takes an aggressive stance to the racial legacy of South Africa through his focus on the associations of cultural objects. Impis features a series of twelve British police riot helmets, sculpted in coloured glass and arranged on plinths, surrounding a wooden arm rising out of the dust. Their arc-like formation hints at his anger towards the appropriation of a tactic used by the Zulu army in an attempt to win independence from colonial rule during the Anglo-Zulu war of 1879, while the forthright limb suggests the resilience of native people. The two-headed Ghost Dog, inspired by a Congolese wood carving housed in the British Museum (Kozo), snaps at its body in a self-reflexive motion as dozens of knives pierce its back. The sculpture not only challenges colonial looting; it allows Rhode to confront his youthful fear of the German shepherds who protected his neighbourhood in a climate of rising violence. The limits of this surveillance society are examined in Pan’s Opticon by a doppelgänger using an architect’s compass as an incisive tool of mass observation, tracing the practice of the Russian Constructivist El Lissitzky. Meanwhile, Bathing the Queens dips into the desire to cleanse the tainted nature of British imperial heritage, with four prints of hands washing playing-card queens in bowls of soapy water. As in Rhode’s restroom fountain at Prospect. 1 New Orleans, water becomes a vehicle for redemption. This fresh body of work at the White Cube offers a powerful counterpoint to the playful Hayward exhibition and marks the evolution of Rhode’s diverse practice, forged from within and beyond the walled-in territory of his native city. 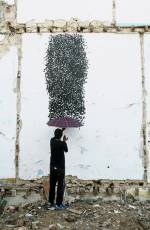 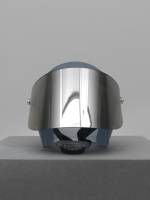 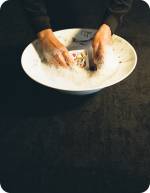