The show opens with the video work Merce by Merce by Paik, Part 1 (1978), rivalled on the opposite wall by Fontainebleau (1988), an elaborate frame of screens, and a prime example of Paik’s characteristic video sculpture. These two works immediately demonstrate his playful challenge to the senses, presenting a splash of colours, shapes and movement – an explosive visual mix. In much of his work, Paik used dancers choreographed by Merce Cunningham (1919-2009). In classic Paik style, the dancers perform on psychedelic backgrounds, manipulating their bodies in the same way that Paik manipulates his media using techniques of layering, transplanting and abstracting. The figures appear somewhere between cutouts from magazines and avatars from the future caught between dimensions, as they shift, pulse and jive across his screen.

We are next introduced to two members of Paik’s techno-team, an army of whom can be found at the Nam June Paik Art Centre in the suburbs of Seoul. Meet Beethoven (2001) and Schubert (2001). The pair of video sculptures come to life through various musical components that form their bodies. Beethoven is born from a few analogue radios and a record player, whose extra arms cast a lethal shadow of fingers on the wall and a cheeky wave to the viewer. Roman numerals, numbers and the treble clef are thrown in with some neon lights as Paik plays with musical history, juxtaposing the past and the present. Schubert’s bright red Mexican sombrero, formed from a gramophone speaker, is a token to Paik’s humour as he plays on the alternative uses of technology.

Charlotte Moorman and her cello were further accomplices in Paik’s unconventional musical performances. She worked with him on some of his most experimental works, such as TV Bra for Living Sculpture (1969), in which the musician wore a bra made of television screens, while playing the cello. In Opera Sextronique (1967), featured in the video lounge of the exhibition, we again see Moorman filmed while playing the cello, this time topless, using a violin as a bow – a performance that in 1967 saw her arrested for indecent exposure. Moorman was a provocative influence on Paik, challenging his practice using elements of risk and chance in performance. TV Cello (1999)is another video sculpture that is central to the exhibition. The clunky bodies of seven televisions are piled up like magnified pixels in an antithesis to the elegant curve of the cello, a tribute to Paik and Moorman’s work together. Paik was a member of the Fluxus group, in which artists and musicians worked closely together, combining media and performance to create artwork that was part of a wider philosophy inspired by found objects, chance and experimentation. Paik studied music and musical history in Japan and Germany, and his technical musical education emerges throughout his work. In Electronic Opera No 2 (1972), he places classical music in a contemporary context with a clash of sound and image – rational v experimental.

His friendship and working relationship with Japanese engineer Shuya Abe produced the Paik Abe Synthesizer (1972), a robotic device that enabled Paik to edit and transform video material through video feedback, scan modulation, non-linear mixing and colourisation, to produce new videos. The device allowed Paik to treat the TV screen as a canvas, in the words of scholar Edith Decker-Phillips: “As precisely as Leonardo, as freely as Picasso, as colourfully as Renoir, as profoundly as Mondrian, as violently as Pollock, as lyrically as Jasper Johns.”

The sculpture Video Chandelier No 1 (1989) is suspended from the gallery’s high ceiling, and video work Global Groove (1973) is projected across the back wall. The chandelier hangs as a jumble of wires and small television screens, all flashing in unison with their choreographed images in an explosion of Paik’s creative genius. Global Groove is a video collage of flickering imagery, where frames of wild, disturbing faces are layered with happy music and joyful dancing. In a collision of media and culture, the 28:39 minute video moves on to a spoken monologue from John Cage and traditional Korean dancers who wear the long-sleeved and hooded national costume. His work is like a projected scrapbook of his cultural influences: in the exhibition, we also find a personal scrapbook of posters, paraphernalia, musical scores and objects from his studio, such as musical instruments and letters. A video interview and various photographs allow Paik to take centre screen as we are introduced to the man alongside his ideas, projects and experiments.

His iconic TV Buddha (1999) summarises his importance as a thinker and philosopher. A meditative Buddha is seated facing his own live image, which is filmed through a video camera and projected like a mirror on to an opposing television screen. The visitor participates in this work by walking behind the Buddha, and, in turn, being projected onto the screen. The Buddha, symbolising his East Asian cultural roots, is transformed into a modern icon by the television screen. Paik predicted the global influence of television, its ability to project images and philosophies across the world, a cross-cultural ritual for humans everywhere, like a religion. Paik foresaw, too, the increased importance of technology to humanity and the explosion of development that has occurred in the past 20 years. He experimented with projecting images, multiplying screens, manipulating imagery and clashing symbols of global culture – all things we now experience everyday through digital advertisements flickering in the streets, televisions that we control on demand, and social media where we use smart phones to project images across the globe. The exhibition traces Paik’s personal trail of artistic relationships and his cultural experiments, which resounded like radio waves. Along with his technical genius, Paik’s humorous approach to his work shows us that objects often have an explosive potential beyond their intended function, and they should be tested to the limit, manipulated, adapted, moulded and always reinvented to create something new. 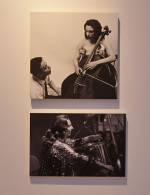