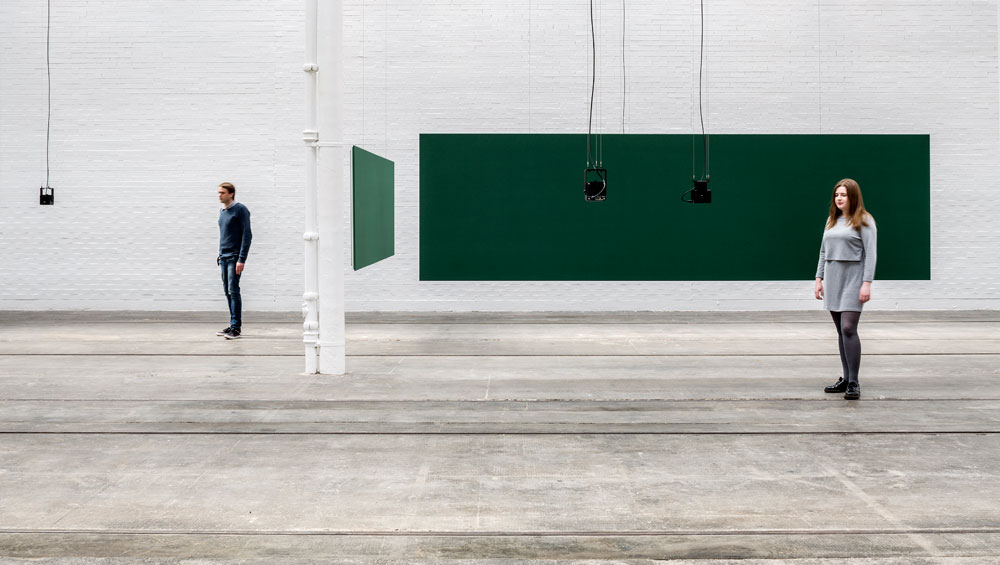 In a brightly lit former tram depot, 12 speakers are suspended from lengths of silver wire. The centre of the space is intersected by eight acoustic panels, which, with their green felted surfaces, resemble upturned snooker tables. On the hour and half hour, a 25-minute chorus begins to emanate from the modest-looking speakers.

The installation comprises Synopsis (2017), Florian Hecker’s newest commission for Tramway, a gallery with a long industrial history, located in Glasgow’s Southside. Hecker’s work is made up of four pluriphonic computer-generated sound pieces, all of which started life as Formulation (2015), a work produced for Hamburger Bahnhof in Berlin. For Tramway, Hecker has produced three resynthesised interpretations of the original Formulation, and here he presents Formulation As Texture [hcross] (2017), Formulation Chim 111 [hcross] (2017) and Formulation DBM Self (2015-2017), along with the original piece.

This practice of “reformulating” fits neatly with Hecker’s previous work. In 2012, at Documenta 13, the artist presented Chimerization (2012), an installation comprised of three recordings of a libretto by Iranian philosopher and writer Reza Negarestani. The recordings were overlapped in English, Farsi and German, and further layered with an additional sound track. In Synopsis, the effect is similar; the four pieces are played simultaneously as one installation, producing a disconcerting barrage of diverse yet synchronised noises.

This idea of variations unfolding through time is clearly important to Hecker; speaking in an interview with Urbanomic in 2009, he asked: “What does it mean if something changes from one state to something very different, something which on first hearing does not connect straightaway to what you perceived before? I would not want to call this a break or rupture, but rather a situation where one state is being followed by another which is quite different, a sort of a sequence of events and episodes.”1

This idea can be understood as part of Hecker’s broader investigation of the situation and experience of sound; what the exhibition text calls its “dramatisation”. Synopsis is, however, engaged in sound’s spatial and sculptural conditions more than in previous works. The eight acoustic panels, arranged in right angles like a city grid, or a circuit board, merge the discrete pieces. Walking through the arrangement is to overhear a single snatch of isolated sound, before it again mingles into the audible mesh.

In 1952, John Cage, the American composer and pioneer of avant-garde music, staged an event at Black Mountain College, in which he disrupted seating arrangements, dividing them into four sections. In this way, he fractured viewpoints into an array of incomplete perspectives. Each participant was presented with a unique, if partial, experience.

In Synopsis, Hecker seems to be attempting something similar to Cage, if in a greater state of flux. More so than in most exhibitions, the subjective experience of the installation is foregrounded. In part, this is due to the inherent properties of sound, something that transgresses borders and fills space; each ear hears it differently. Synopsis is a dramatically different experience for each individual. At the exhibition opening, for instance, some attempted to isolate noises by putting an ear to a single speaker, others sprawled on the floor, more still moved swiftly through the space.

With this in mind, my experience of Synopsis consisted of a sensory encounter with the processes of attention, memory and expectation. As in free jazz, I heard themes emerge from interwoven sounds, which swiftly disappeared, and then reappeared minutes later. Noises exploded from disparate locations, and I searched for a source. Slight rhythms built the expectation of a direction or development of the piece, but these hastily reunited with a larger moving mass of sound.

The title of the exhibition reflects and plays on the difficulty of attempting to describe such an experience. The accompanying text looks to the etymology of “synopsis” – “sun”, meaning “together”, and “opsis” from the Greek “seeing” – and draws on the philosophy of Jean-François Lyotard to suggest the implausibility of this action: “The very concept of synopsis poses a problem … on the part of the recipient who is the visitor, there is the principle that he is foremost a man who looks, an eye. What’s more, this is an eye that is in movement over a body, an eye that wanders, and therefore one that exists in the general register of the promenade.”2

Rather than suggesting Synopsis can be comprehended as a single entity then, Hecker successfully explores the inherent quality of sound: a thing unfolding through space and time. While this might not be a new idea, Hecker dramatises this process for each individual to experience. Walking through Synposis is to experience what Stephen Dedalus does on Sandymount Strand, in Joyce’s Ulysses: “You are walking through it howsomever. I am, a stride at a time. A very short space of time through very short times of space.”

References
1. Sound Out of Line: In Conversation with Florian Hecker. Florian Hecker interviewed by Robin Mackay. Urbanomic. 2009.
2. After Six Months of Work … (1984) by Jean-FrançoisLyotard. In: 30 years after Les Immatériaux: art science and theory, edited by Yuk Hui and Andreas Broeckmann, published by Meson Press, 2015, page 275