Heaven and Earth: Art of Byzantium from Greek Collections

Heaven and Earth: Art of Byzantium from Greek Collections

Go to see it and experience what it feels like to be inside a halo: radiance untrammelled. I would not send a New Yorker four hours by train, five by car, six by bus for anything less.

I had expected a lovely small teaching show addressing the west’s poor understanding of the import of Byzantium’s 1,000 years of art-making while medieval Europe licked its battle wounds and relegated culture to the monasteries. Indeed, Byzantium’s efflorescence and rich contribution to that of Europe is a field that has received belated exposure and scant scholarly research, and a majority of the 170 objects in this show (all borrowed from important Greek sources, such as Athens’ Benaki Museum) prove the point.

Although we have been aware for some time of this lopsided view, it is so ingrained in the western tradition that we need frequent reminding. The reminder here is not gentle. The absorption and reworking of the Greco-Roman culture was less seepage than interactive connectivity; the mosaics, glass, ceramics, coins, jewellery, textiles, illuminated manuscripts, sculpture and paintings on view depict ideas that were carried in on the trade routes and tested, acted out, fervently embraced or violently rejected. A glorious head of Aphrodite was battered and branded with a cross; a gilded icon promises the migration of both angels and the crucified to a freedom from the pain inflicted on those left behind.

Proportionate to the volume of the National Gallery, the show’s six galleries take no space but, as was the case with the Metropolitan Museum’s unlikely blockbuster of medieval tapestries, it looms large.

It is generally useful to see art in context – a work or an exhibition as it relates to site, subject, era or comparative material. Here, this approach is reversed. It is what you bring to this show that fills out its meaning. Having just come from a week crowded with auctions and openings, I had brought with me the temporal baggage of art happening now: Sotheby’s and Christie’s Sunday brunch viewings of art for the 1%; Mike Kelley’s soft belly of dark childhood at the Museum of Modern Art’s PS1; self-stated image-maker Christopher Wool’s skewed lexicography at the Guggenheim; and the fleeting teasers by Banksy. I had to jettison it all at the door. Here is art for the ravenous bodies and souls that constituted the medieval world’s 99%. Here is the hard wisdom of illuminated maturity. Here are art history’s image-makers. And, in contrast to the art of no subject, no title and perishable materials, here are the receptacles of the spirit, the writ of the Lord, the eternity of gold and the timeless suffusion of egg tempera on wood.

The condition of unquestioning devotion imposes its own limits, of course. We find ourselves in a world of no perspective and gilded veneration: donors and saints float on the same plane and skies are golden. The icons will blow you away. Softly lit, they glow like embers. The paint on the icon depicting the Archangel Michael is so layered against handling and the elements that it looks leathered – the weathered survivor of orthodoxy’s turbulence. The largest – some fashioned to be paraded in the streets as the last bulwark against Ottoman invasion – were posters for the power of faith. On the spectrum of portraiture, they are at the opposite of photography – the medium that Robert Rauschenberg said carried his “seeing from place to place”, the medium (explored in his recent show at Pace/MacGill) that “is about the eye and not about the hand”. Icons of the 14th and 15th century were all about the hand – a hand immeasurably skilled, albeit one painting on automatic, in service of a vision.

To view them is to experience extreme beauty. However, pleasure is a byproduct. The purpose of this show is to rattle you, to throw up surprises. Successive centuries introduced interpretive reality: doubts tugged at the seams. The confusion of so many myths and mores led to unsteady transition: both Orpheus and the Good Shepherd shoulder tables; ocean deities float across ivory combs; religious inscriptions decorate pearl earrings.

These, of course, were secular items, objects of luxury and earthly delight. Nonetheless, during that time of schism and fear, superstition and desperate faith, both gods and God infused emperor, patriarch and peasant to reside in life’s very capillaries. Only a completely new western perception can restore them to their position of power and influence on art as it irradiated the Byzantium soul and travelled back on the trade routes to inflame the Renaissance. If you are already so enlightened, go anyway – go for the high of inhabiting a halo. 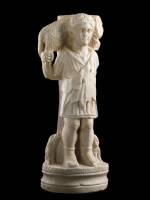 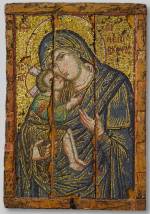 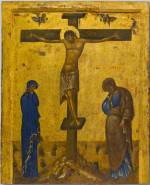 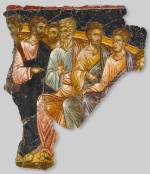 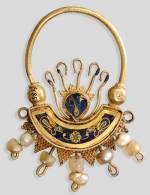 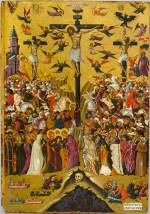 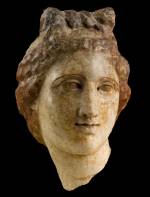 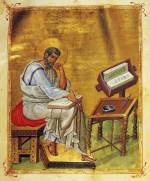 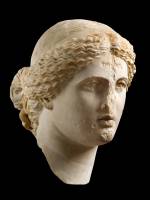