At first glance, Christopher Wool’s paintings are objects, complete and unequivocal. They stand in front of us as things that are thought through, perfected and complete in their manufacturing process.

Made out of industrial materials, such as enamel and aluminium, as well as more traditional “artistic” ones, such as rice paper, linen, silkscreen and vinyl-based paint, they look like ready-mades in their conception and fabrication – and they are to all intents and purposes. At the same time, they are also paintings, photographs and works on paper in their basic shapes and the processes of their production. Wool’s current retrospective at the Guggenheim Museum, which covers a career that spans roughly a quarter of a century, allows us to examine the logic and evolution of his adventurous marriage of ready-made and art. Katherine Brinson, curator of this elegant exhibition, mentioned in her catalogue essay that Wool, 58, refers to his works as “pictures”. This use of the word is telling because it connects us directly to the critic Douglas Crimp and his exhibition Pictures, which entered the annals of art history as a forceful declaration of the end of high art and its attachment to a particular medium: “Picture, used colloquially, is also nonspecific … in common speech, a painting, drawing or print is simply called a picture. Equally important for my purposes, picture, in its verb form, can refer to a mental process as well as the production of an aesthetic object.”1

Coming of age as an artist in the early 1980s, at the height of the reign of conceptual art, Wool was confronted with this “endgame” debate surrounding painting. In 1981, Crimp’s essay The End of Painting appeared in the 16th issue of the journal October. Essentially, it argued that, by the late 70s, the practice of painting had exhausted itself. To Crimp, painting as practice and an institution had finally and unequivocally revealed itself as “pure idiocy” in the face of the indubitable facts of the “real” and “historical” world. At that time, photography was coming into its own and trumping painting on all counts. Such painterly hallmarks as brushwork, illusionism, and expressive immediacy looked passé at best and reactionary at worst. Caught between the extremes of Daniel Buren’s subversive artistic practices on the one hand and the out-of-bounds neo-expressionistic excesses of Julian Schnabel on the other, Wool definitely preferred Buren’s sarcastic deconstruction to any kind of painterly surfeit. At the same time, he was not ready to renounce the basis of painterly practice – the image itself and the flat rectangular support on which it was rendered. In staying with the fundamentals of image-making, Wool seems to have been in accord with the painter Thomas Lawson, who, in response to Crimp, asserted the necessity of maintaining “faith”, and suggested that, instead of burying itself and the museum in its wake, painting should work to criticise the “illusions of the mythology of individuality” and other “illusions of the present” from inside the institution itself.2

The retrospective at the Guggenheim documents various stages of Wool’s attempts to find the way to create works that would be considered painting without actually painting them. His earliest forays in this direction displayed at the exhibition date to 1987. At that time, he painted with commercial hand-rollers on sheets of aluminium fitted to the shape of the canvas. The resulting patterns were mostly black-and-white and all-over, covering the surface of the work with a steady uniform motif. From these paintings, which looked like wallpaper, he switched to ones that looked like advertisements. “Sell the house, sell the car, sell the kids,” proclaims an early work from this word cycle, using a line from Francis Ford Coppola’s film Apocalypse Now. “Sex, luv,” says another, quoting the words spray-painted on a delivery truck. “TRBL” asserts his 1989 Trouble in bold, supersized stencilled letters. This pop-art assortment is complemented by longer messages that sound like excerpts from a story: “I went to the psychiatrist …” starts My Act (1988), which was done in collaboration with Richard Prince. “The show is over the audience get up to leave their seats …” begins the Untitled (1990-91), quoting a line from Greil Marcus’s Lipstick Traces.

Wool asserts that his word paintings are active: they must “do what they say”.3 Imperative proclamations demanded by this sort of injunction are rare, however, and appear only in his later word paintings, such as: “If you can’t take a joke, you can get the fuck out of my house” (If You, 1992/2005). In most cases, Wool’s words do not tell their audience what to do in such a categorical manner, but rather create a vaguely defined psychological atmosphere by setting up a certain tone, which must be detectable by the speakers of the language, albeit at an unconscious level. This cultural subtext is most noticeable in his single-word paintings or in phrases coined from popular media, although it governs all his work, including his signature reproduced canvases, made in the past decade. In these ingenious objects, Wool transfers a painting on to a screen, prints it in black-and-white or another colour on four smaller canvases, reassembles it in the form of the original composition, which then becomes another original.

Wool’s photographs, which form a significant part of the installation, are responsible for importing this subtext into the exhibition space. The artist rarely takes single snapshots; usually they are made and displayed in a series, parading before us grey and desolate urban environments captured as if in passing, obliquely. The exhibition features three of these series, completed in the mid- and late 90s. The first, Absent without Leave, records seemingly sporadic scenes from the artist’s travels. Images of abandoned spaces and homeless animals proliferate here. The second, East Broadway Breakdown, has a similar iconography of a deserted and ramshackle urban landscape, but a more specified locale: here we see the streets of Lower Manhattan, where Wool lived and worked. The third series is even more circumscribed locally and accentuated thematically. In it, the artist simply registered with the camera the devastating effects of a fire in his studio. Bare walls, blown-out windows, scorched floorboards, pieces of concrete and rubble littering the place offer only a partial description of the ruin that his studio had become. The general mood conveyed by Wool’s photographs is the same as in his word paintings and his later silkscreened works: loss, waste and desolation. This mood becomes the work’s subject, setting up a stark contrast with the light-filled rotunda of the Guggenheim Museum. Wool’s work is push-and-pull in that it appears to attempt to escape the confines of medium-specificity in its processes of production and reception, but it also stays firmly ensconced within these confines, because it remains indelibly tied to the traditional forms of museum display. Coming to life through the debate of painting becoming “pictures,” Wool’s work is deeply unhappy in its ties to affectivity: it is, as Crimp would say, “mental,” as well as “aesthetic”. 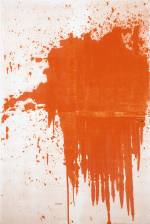 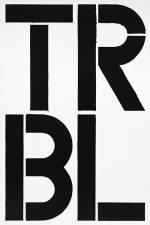 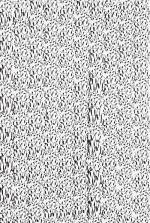 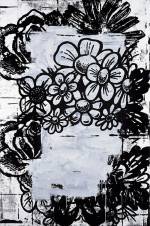 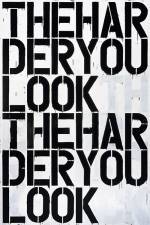 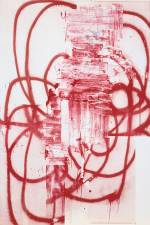 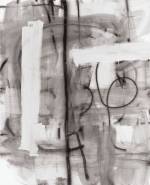