Leila Heller – interview: ‘The Upper East Side is hot again and I love being back’

Leila Heller – interview: ‘The Upper East Side is hot again and I love being back’

Gallerist Leila Heller talks about showing Andy Warhol and Jean-Michel Basquiat in the 1980s, after meeting them in New York clubs, promoting artists from the Middle East, her current show curated by Warhol’s muse – and why she has just moved her gallery back to where it all began 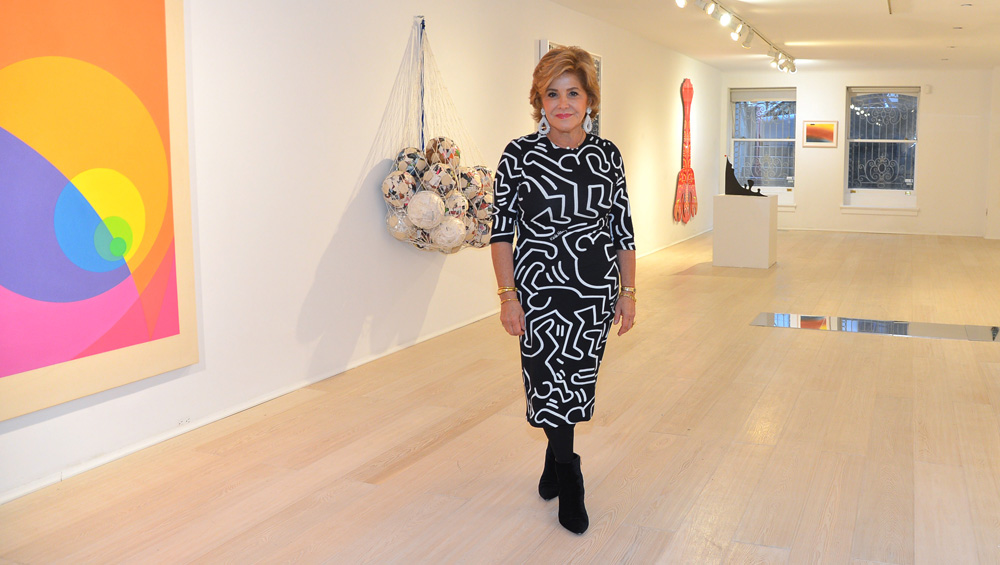 Natasha Kurchanova: I would like to ask a few questions about your gallery. You have been dealing in international art for about 30 years and in Middle Eastern, central and south-east Asian art for not quite as long …

Leila Heller: It has been almost 40 years since I opened my gallery.

NK: What year did you establish your gallery?

NK: That is a long time. There have been a lot of changes in the market since then. What art were you dealing with when you first opened?

LH: In 1982, I was dealing in American and Latin American art; there was no market for Middle Eastern and Asian art until about 2005. 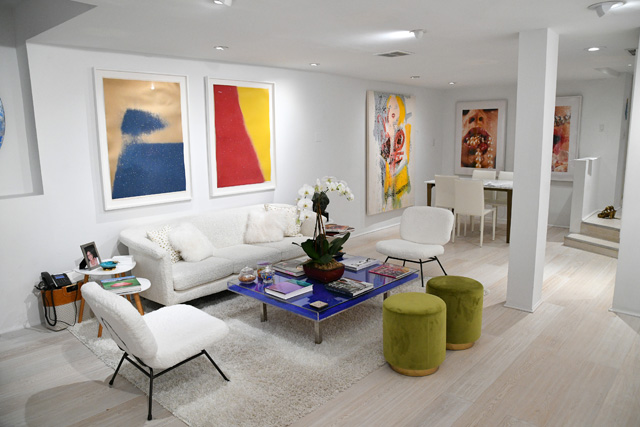 Leila Heller Gallery’s viewing room on the Upper East Side.

NK: Can you tell me about the beginning of your career?

LH: In the 1980s, as a young artist, I lived and worked in New York and was part of the art world. It was the heyday of the 80s and the art scene in New York had a lot of parties: at the time, the club scene and the art scene were intermingled. I was making many studio visits; I was also frequenting clubs – Xenon, Studio 54 and the Mudd Club. When I opened my gallery, I showed artists I met then, including artists who showed their work in the clubs: Andy Warhol, Jean-Michel Basquiat and others. In 1984, I curated a show with Jeffrey Deitch at my gallery. It was called Calligraffiti and it included 120 artists – graffiti artists from New York, Middle Eastern calligraphy artists, as well as artists such as Mark Tobey, Cy Twombly, Joaquín Torres García and others. They have calligraphic-gestural work. At that exhibition, we also included several Lettriste artists from France. In the 60s, 70s and 80s, the Lettriste movement was very much in fashion. Jeffrey Deitch and I hosted a party in the area to which 3,000 people  came.

I opened my gallery shortly after the Iran hostage crisis; the political situation affecting this region was not a priority for New York collectors. In the beginning, I had solo shows by Charles Hossein Zenderoudi, Nicky Nodjoumi, Massoud Arabshahi, Monir Farmanfarmaian, YZ Kami and others. Except for Kami, who sold very well, nothing else sold. Kami was more successful, because his art was philosophical, not very graphic or political. Things were not good with the market in Middle Eastern and Asian art until the early and mid-2000s – that’s when the market became interested in art from this region. 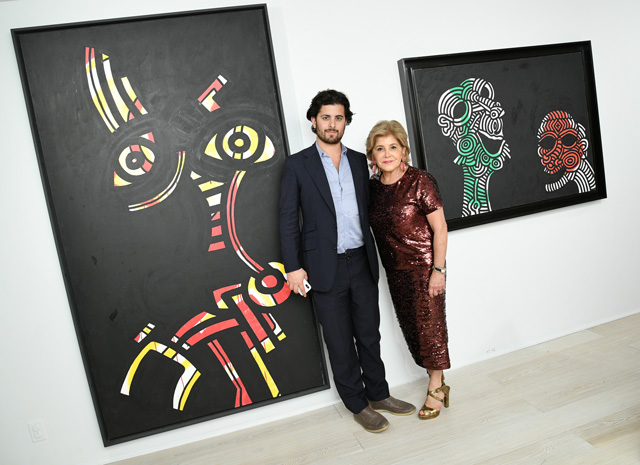 Leila and Alexander Heller in front of Keith Haring paintings at their uptown gallery.

The interest was fuelled by the advent of the internet; the openings of Christie’s and Sotheby’s in Dubai; the planning of a new Guggenheim Museum in Abu Dhabi and the openings of the Sharjah Museum, the Louvre at Abu Dhabi, the Museum of Islamic Art in Doha, and the National Museum of Qatar. These developments made Middle Eastern art more global. The internet in particular allowed Middle Eastern art to become more popular. It also showed that artists from the Middle East were active all along. Okwui Enwezor’s last exhibition, in 2016 [he died in March this year], which he organised at the Haus der Kunst along with Katy Siegel and Ulrich Wilmes, argued that modernism was not a western, but a global phenomenon, because at the time when modernism was developing in the west, artists in Latin America, Africa, and Middle East were working in the same direction. In this exhibition (Postwar: Art Between the Pacific and the Atlantic, 1945–1965), Okwui included artists from the so-called third-world countries, undermining the idea that modernism is synonymous with Pablo Picasso, Wassily Kandinsky, Piet Mondrian and other canonical western names. Before this work was done, people were not aware of modernism’s global character, because everyone thought that western art was the essence of modernism and contemporary art. 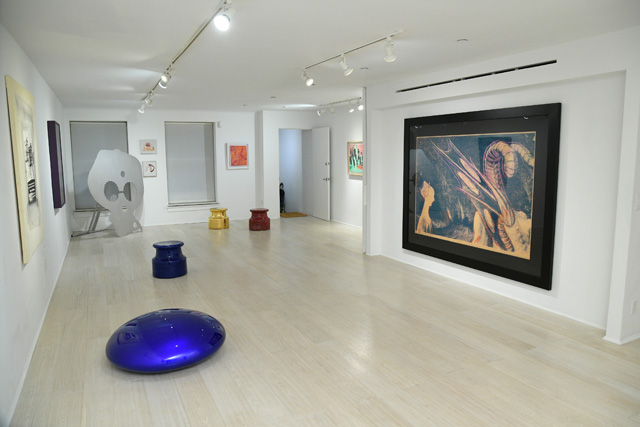 NK: You credit the internet, then, for the change in public understanding of the importance of art from different parts of the world.

LH: Yes, I do. I also credit announcements by governments, such as was done by the United Arab Emirates in 2005. Also, Iran started building museums before the revolution, and they were mega-museums, housing important collections. This infrastructure is still there; all these museums are still open and very active.

NK: This is all true today, but at the beginning of your career, before Middle Eastern art entered the purview of the world art market, for roughly 20 years you operated in the atmosphere of basic misunderstanding of its role in the development of modernism as a global phenomenon. 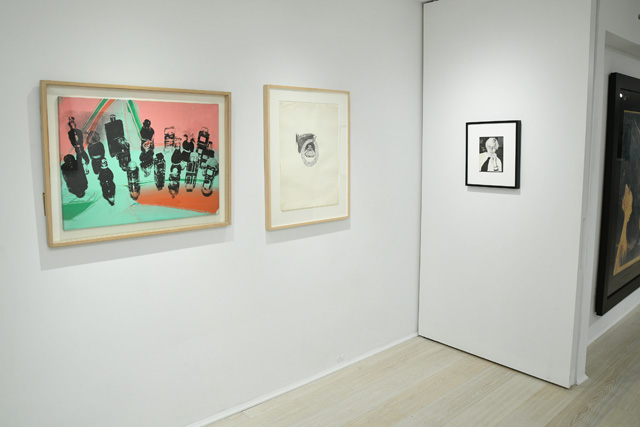 NK: It sounds as if you continue your policy of showing an international scope of artists.

LH: Yes, I do. For example, the current show, Double Vision, is curated by Jane Holzer, a historic figure and a cultural icon, who was Andy Warhol’s muse. It is about the Factory and the artists involved with Warhol at that time. It also includes younger artists and gallery artists selected by the curator. The show before that was by modern and contemporary masters – Jeff Koons, Anish Kapoor, Richard Prince, Yayoi Kusama, Basquiat, Warhol, Picasso and other well-known names.

LH: I started on the upper East Side, and I was there for 30 years before moving the gallery to Chelsea. I moved to Chelsea, because that’s where the art scene was at the time. But now things are changing. In the last few years in Chelsea, our business was not doing well, because the Hudson Yards opened and traffic became very heavy. Most of our clients would refuse to make a trip to see us there. Also, Chelsea became very expensive. It has become very entertainment-oriented, with several recently opened boutiques, restaurants and other establishments that drive the rents up and chase the galleries out. Most of the smaller and middle-size galleries have started to move out in the last two years. The younger, hipper galleries have moved to Tribeca and at one point to the Lower East Side, and the rest of the galleries have moved uptown. Some big galleries have flagships in Chelsea right now, but we cannot afford to have two or three galleries around the city. 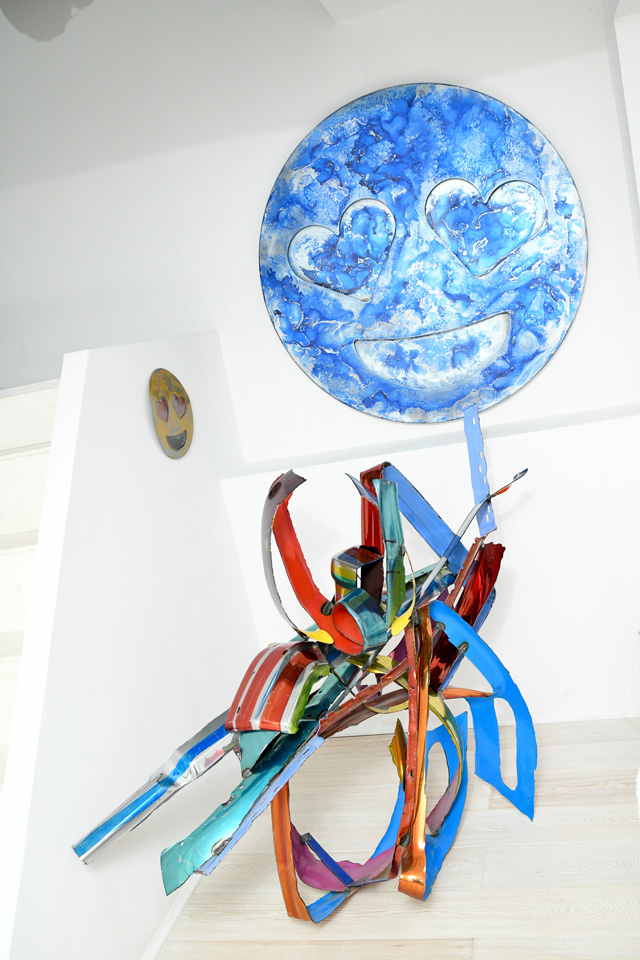 We chose the location where we can find business. The Upper East Side is hot again and I love being back. This is where the clients are, at the end of the day. Also, many major museums are located here – except for the Whitney and the New Museum – and museums are some of my biggest collectors. They are all uptown as well. Everybody has a forte, a niche. I have been well-known for placing my artists in major museums, such as the Metropolitan Museum of Art, the Guggenheim Museum, Los Angeles County Museum of Art, the British Museum, Cornell Art Museum, Brooklyn Museum … I have made many sales to these museums. They are my major clients.

NK: It sounds as if this move makes perfect sense for you.

LH: For me, it makes a lot of sense, because, for years, I have not seen a surge in big collectors, and now I have them all back. When I moved my gallery to Chelsea, they all came to the first opening, but they never returned to that location. I found other collectors, but as soon as I moved back to the Upper East Side, my old collectors showed up right away. There is much more activity here. They came back because they live in this neighbourhood. They can come after work to an event at my gallery because it is within a walking distance from their home. 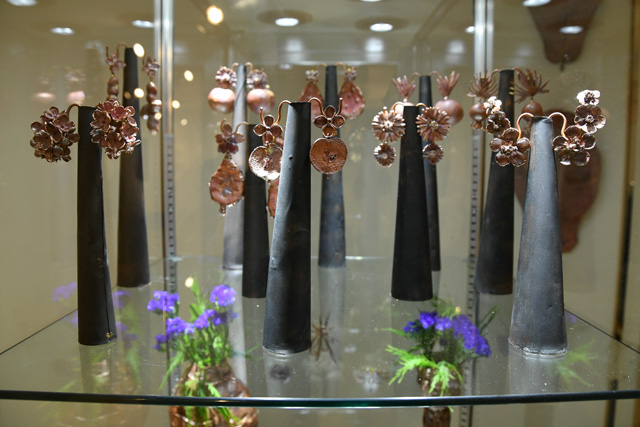 NK: It sounds as if convenience matters.

LH: Convenience definitely matters, especially if you sit in a car for an hour in order to get to an opening. There is no accessible subway line to Chelsea either. You have to take a car there or change trains several times.

NK: In 2015, you opened a division of the gallery in Dubai. According to your website, it is the largest gallery in the Middle East. Could you tell me about that gallery? Apart from geography, is there any major difference in the kinds of artists you represent in those galleries?

LH: Not necessarily, because a lot of artists I show there are major names from Europe and the United States. Many of these artists have their first shows in the Middle East in my gallery.

NK: How is that gallery doing now?

LH: It was doing very well, but now the Middle East is going through a difficult period economically and politically. There is a war in Yemen and difficulties between the Gulf states. I do not want to go into details, but the business there has slowed down a bit. Now, we are concentrating on government-level projects, working on outdoor sculpture installations and institutional-level work. We are trying to find niches in other regions.

Caligrafitti in 2012 at Leila Heller Gallery in Chelsea featuring works by LA2 and table by Yves Klein.

NK: What are the more memorable moments in your career as a gallery owner?

LH: I loved working on the Calligraffiti exhibition in 1984. Jeffrey Deitch and I redid this show in 2012 at my gallery in Chelsea, including the same names – Keith Haring, Jean-Michel Basquiat and others – the artists who used writing in their work. We did not include the same artists as in the 1984 exhibition, but invited younger ones, keeping the Mudd Club rule: we included everybody who used to frequent the Mudd Club and draw on its walls. Some of the work came from the Mudd Club archive. In timing, it coincided with the Iran Modern exhibition at the Asia Society. Another show I loved curating was organised in 2009 in conjunction with an exhibition of Iranian art at the now-defunct Chelsea Art Museum. It was called Selseleh/Zelzeleh: Movers & Shakers in Contemporary Iranian Art. I presented modern and contemporary Iranian artists at my gallery then. That exhibition received a lot of press, including a review in the New York Times. 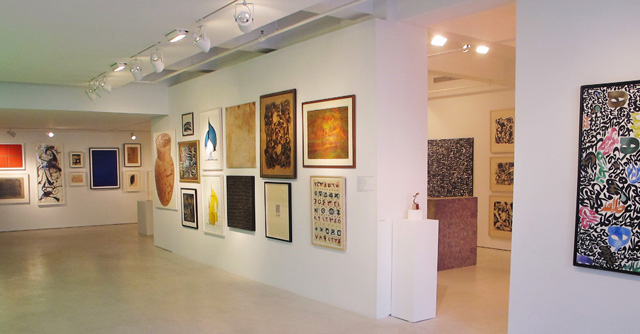 Also, Jane Holzer’s show on view at the gallery at the moment is probably one of the most important shows I have ever done, because Jane has never curated a show before, and she is an icon of Warhol who starred in many of his movies. She took part in the Factory scene; she is a reflection of an era.

NK: What are your plans for the future?

LH: Our vision is always to get our artists included in museum exhibitions, and some of our artists will be included in upcoming shows at the Victoria & Albert Museum as well as the Los Angeles County Museum of Art. It took me years to develop these opportunities, so I am continuing to work in this direction. Now that I am uptown, I am also planning to work on some important curated exhibitions here and on solo shows. In the Dubai gallery, we have a very good programme for this coming year, beginning on 18 September and going until April 2020. Because the 2020 World Fair will take place in Dubai, there are some more region-specific projects that we are developing now.

• Double Vision, curated by Jane Holzer, is at the Leila Heller Gallery, New York, until 23 August 2019. 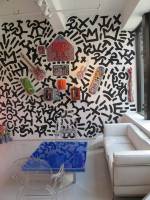