Enoc Perez – interview: ‘I’m trying to create my own little encyclopaedia of cool’

Enoc Perez – interview: ‘I’m trying to create my own little encyclopaedia of cool’

The New York-based painter discusses his new show, The Cinematic Self, at Ben Brown Fine Arts, his painterly process, the interiors that excite him, and his approach to turning 50 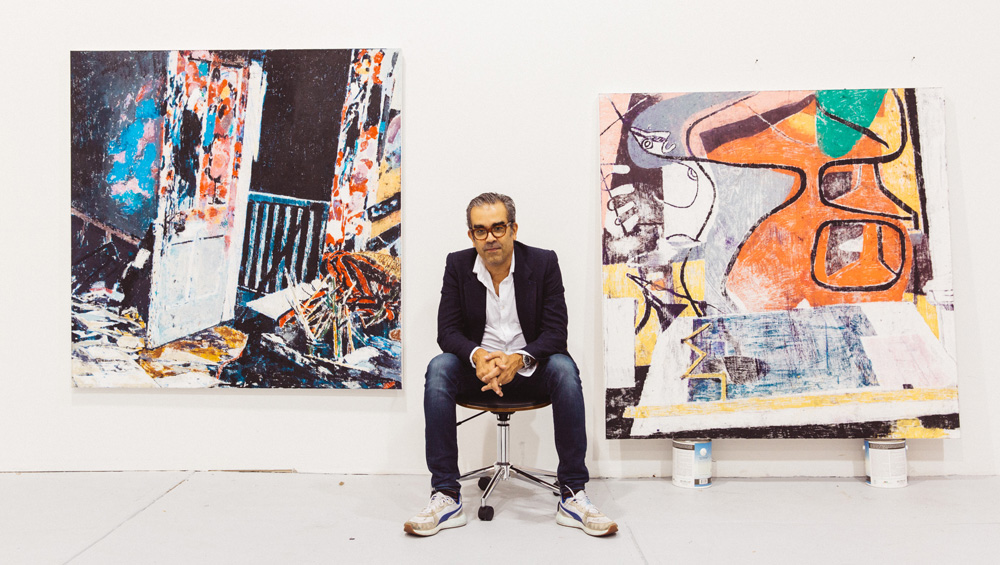 Enoc Perez (b1967) is a portraitist of buildings. The Puerto Rican artist has spent much of his career depicting masterpieces of modernist architecture. His signature technique, where oil paint is pressed into the canvas through drawing, can take these structures to the edge of abstraction, revealing the utopian spirit in which they were so often conceived. Based in New York since the late 80s, in recent years Perez has tackled numerous modern US landmarks, such as Mies van der Rohe’s Seagram Building and the varied projects of the contentious Philip Johnson. A 2017 sequence, begun after the 2016 presidential election, held up a mirror to US embassies around the world: symbols of the country’s political might.

For a new series of works, Perez has instead trained his gaze on the architecture of the interior. Each of the large-scale paintings in The Cinematic Self, an exhibition at Ben Brown Fine Arts in London, presents a part of a single room. Each of these rooms is connected to a figure Perez loves, respects, or finds intriguing. These include artists, designers, musicians and socialites, the majority of whom are dead. Perez creates portraits of these individuals through the spaces on which they imprinted themselves. Francis Bacon’s Kensington studio is splattered with paint and strewn with papers, while the Villa Nellcôte in southern France, where the Rolling Stones recorded Exile on Main Street, has a sneering pair of lips imprinted on a mirror. 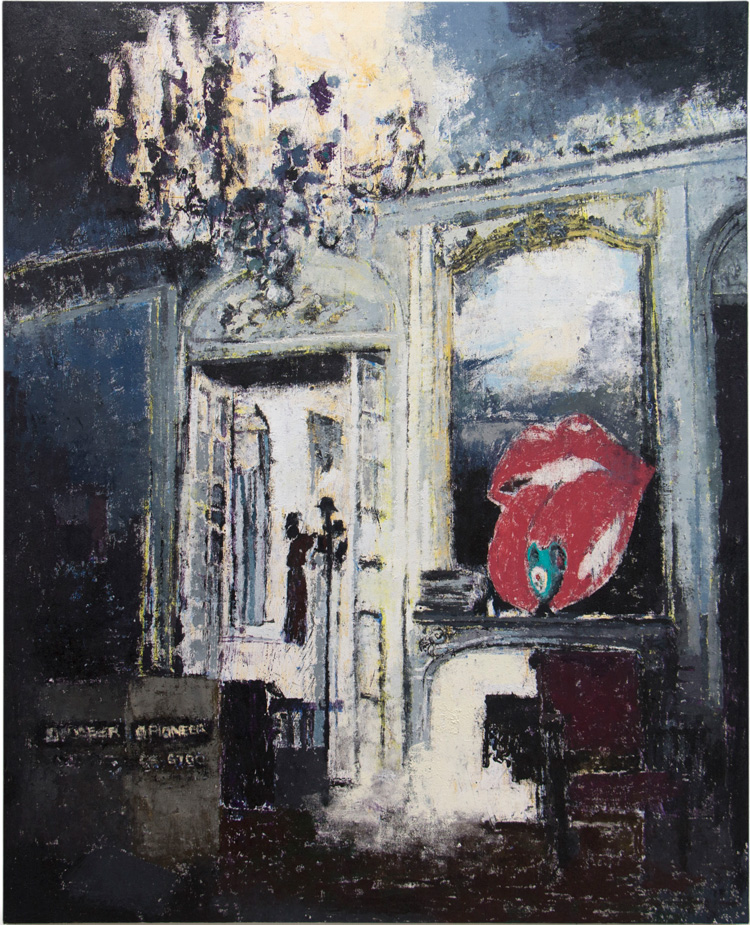 Some, like the architect Carlo Mollino’s secretive Casa Mollino in Turin – an apartment he never inhabited, but, rather, meticulously decorated for 13 years – are deliberate showpieces, where every object has been consciously chosen to reflect its creator’s desires. Others are more spontaneous, such as the compartment that David Bowie and his friend Geoff MacCormack shared on their 1973 trip on the Trans-Siberian Express, a barely furnished bolthole centred around a table of empty bottles and cigarette ends. Almost everywhere there is art, whether hung on the wall or being prepared in a studio. Through these artworks, neatly arranged design objects and accidental clutter, Perez pays tribute to the lives and occasions that took place within. 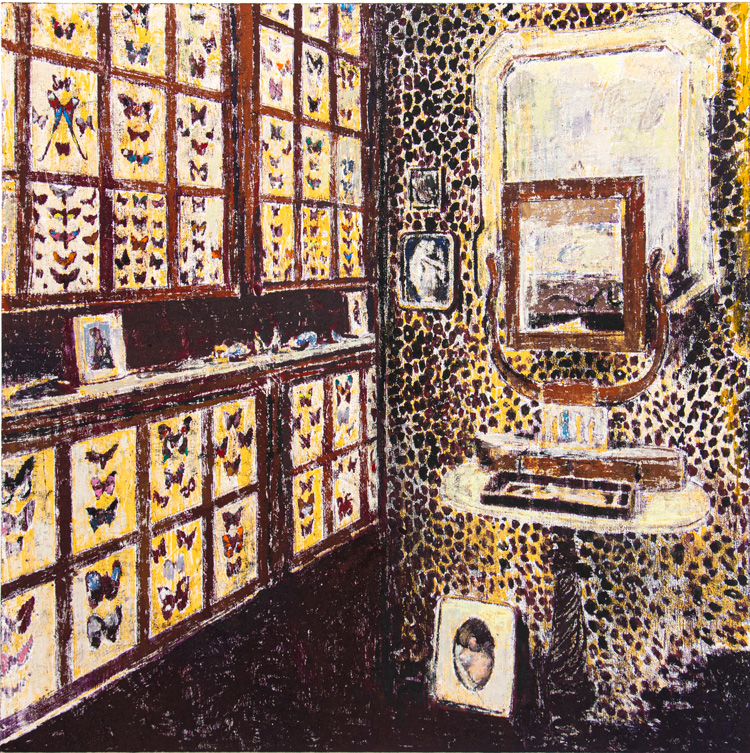 Before the opening of the The Cinematic Self, Perez talked about his move to interiors, the cultural figures that inspire him and his attempts to deal with the dreaded midlife crisis.

Joe Lloyd: You are arguably best-known for being a self-proclaimed “architecture groupie”, painting modernist villas, New York skyscrapers and US embassies. Why did you turn to interiors?

Enoc Perez: I made an exhibition a couple of years ago about the architect Philip Johnson. It was a hard show to make. Johnson’s not a likable figure – he was a Nazi for a while. I tried to tell myself it’s not my job to judge through art. At the time, I was turning 50. I made the show and then took a year to figure out something I would feel happy doing next.

Six months before, a friend had suggested I should do interiors. I thought at first that it was a stupid idea, but as I was trying to figure things out, I realised I could come up with 20 interiors off the top of my head, related to people I love. There are the poets, the musicians, the political figures, and so on. 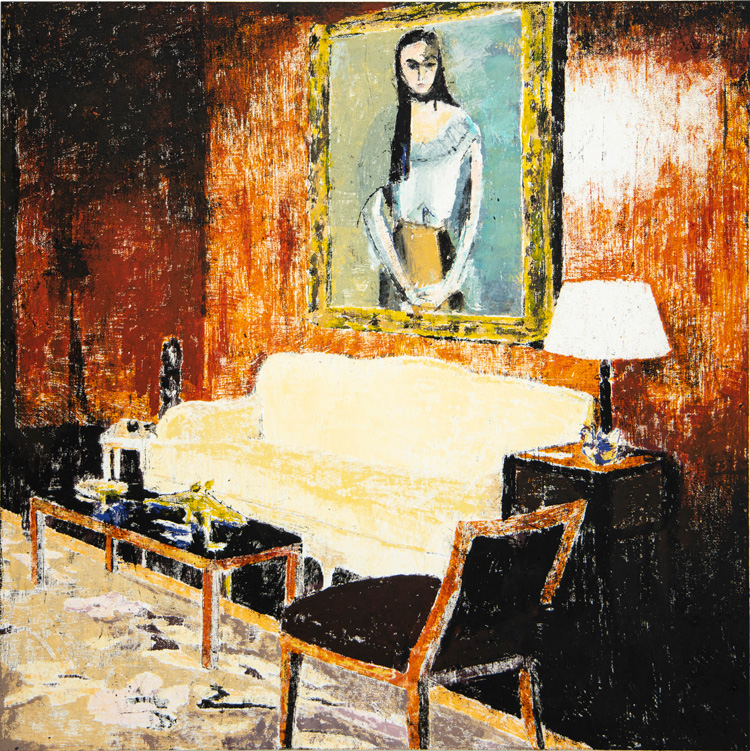 JL: So your choice of subject was partially driven by your favourite figures from recent history?

EP: That’s a funny thing. At the same time, I was going through what I would technically call a “midlife crisis”, which I thought was a whole pile of shit, but it’s actually true. I thought maybe I should get a car, perhaps that would make me feel good. So, I traded a painting for a car. But I didn’t keep it for long; it wasn’t what I was looking for. Then I thought maybe I could get a nasty tattoo. I was going to go to Mexico and have a friend, a famous tattoo artist, who could do it. But at the last minute I changed plans. I realised I had to find what I was looking for in the studio. So I started making these. This is one show, but I have done a wider series of paintings about creatives, society types, industrialists – just people I think are cool. 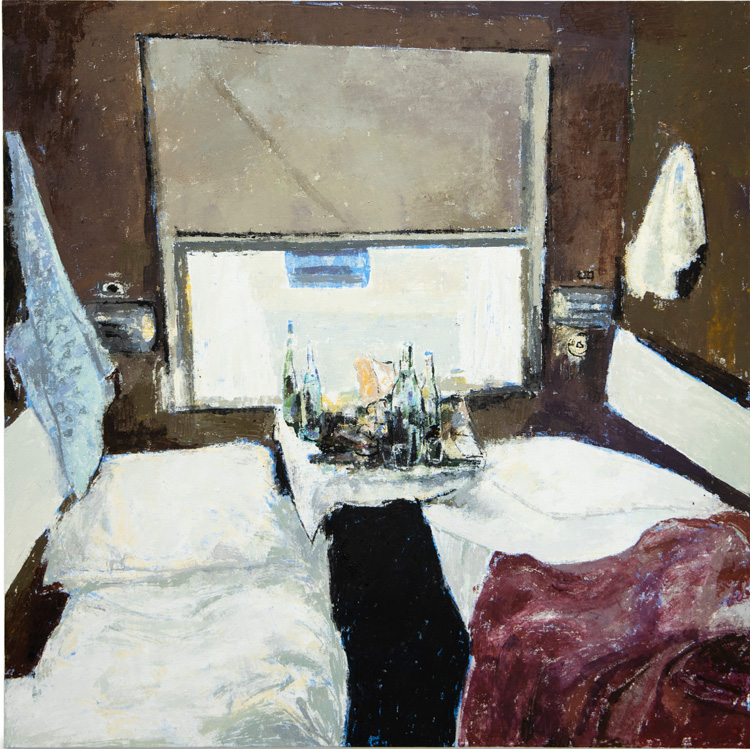 JL: On what did you base your depiction of them?

EP: I researched them, looking for stories and photographs. I started with the people I liked. I’m trying to create my own little encyclopaedia of cool. For example, take David Bowie. I love him, I love his genius. What interior could I find around him that appealed to me as a painter? Well, he famously took a trip through Siberia, because he was afraid of flying back from Japan, so had to take the train instead. So I chose that. In each case, I searched for traces of the person. The painting of [Francis] Bacon’s studio looks like a trip inside his head – the darkness, the spilled paint. It sounds like a heavy metal song, it’s crazy. And he was around in the 1950s. 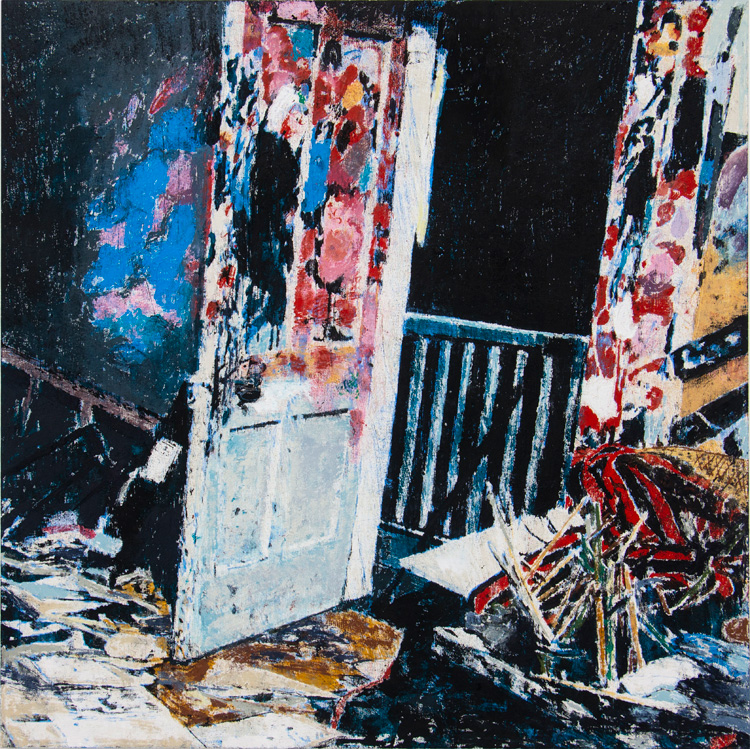 JL: A lot of these interiors no longer exist in their present form. Do you regard each interior as set at a particular moment in time?

EP: To me, they’re all on the same plane, at the same time. It’s my world! They’re like portraits too, as I understand that. My building paintings were portraiture as well. They’re mental constructions. And bodily – Bacon’s studio is like an organ, like a lung or a liver or a heart. It makes you feel closer to these great creative men, but also to how things come together. 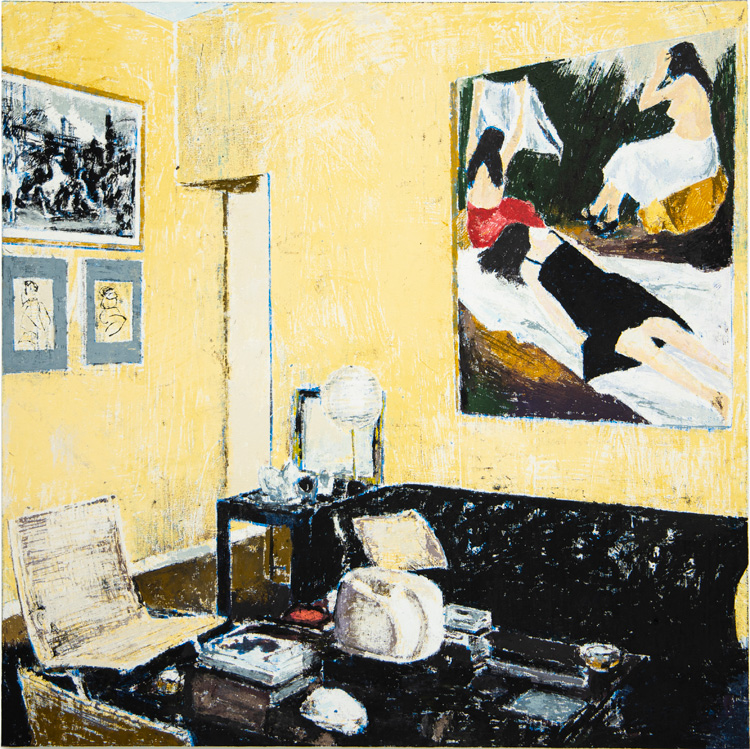 In my picture of Palazzo Mengarini, the house of Gianni Agnelli in Rome, you can see a beautiful painting; I haven’t been able to identity it, but it’s beautiful. But they also had a Bacon in the room, which you don’t see because I didn’t have enough canvas. Or in the Parisian apartment of Jacques Doucet, the fashion designer, you have a ceiling that looks like the petrol station designed by Jean Prouvé. But it was done in the 1920s, four decades before, by Eileen Grey, another great. And Doucet had Matisses and De Chiricos. So it’s all kind of choppy, mixed up.

JL: Your paintings have a very distinctive style. From afar, they appear to be coated in dense layers, but actually the paint is very thinly applied, with the canvas beneath often visible. How do you achieve this effect?

EP: Another thing that happened on turning 50 was that I realised I had to go back to making paintings like I did when I was 28, with very thin layers because I couldn’t afford a lot of oil paint, and I was afraid to mess up. So I went back to my earlier process.

They’re made with what you could call a very primitive form of printmaking. I project the image on to the canvas, then cover it with sheets of paper with oil paint on the back. For every colour that goes on the painting, there is a sheet of paper. I then draw on them, so it pushes the colour in – almost like carbon paper. And so it goes in, colour after colour. It ends up being a sort of monotype.

The process is important to me as a New York artist. The artists there I admire – Robert Rauschenberg, Andy Warhol, Christopher Wool – are all printmakers. They all use printmaking in the process of painting, which I do in this kind of primitive way. It also lets you get away with doing whatever you want. You can make an abstract painting in the same breath as a completely figurative one. 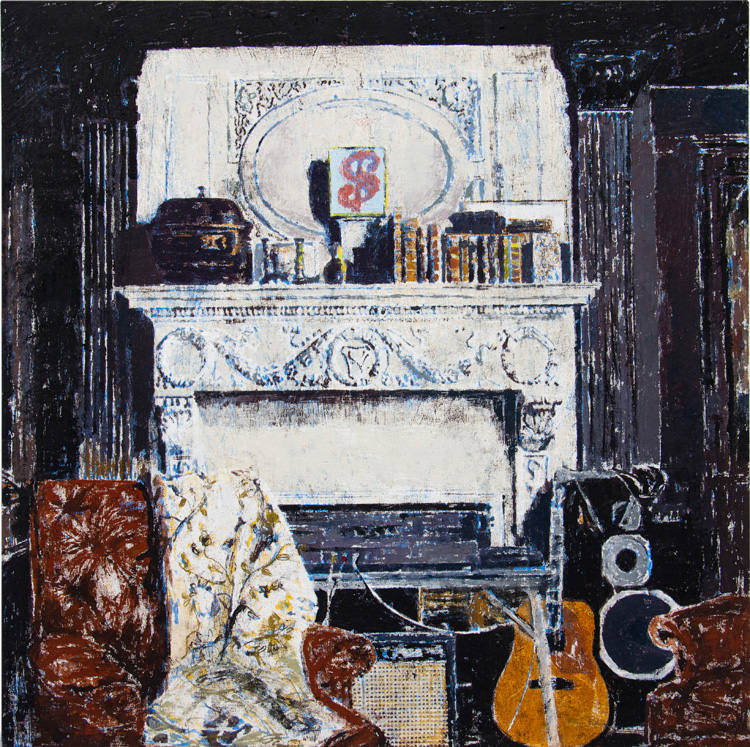 JL: Warhol seems a particular presence in the series, though none of the interiors belong to him.

EP: Yes. He’s there in Jerry Hall and Mick Jagger’s New York apartment, which was decorated by Jed Johnson, who was Warhol’s boyfriend for the longest time. There’s a little dollar sign on the fireplace. And there’s the office of Fred Hughes, Warhol’s manager, in the final Factory location. The funny thing is I had my studio right next to it for years. It’s now gone. But New York doesn’t care for its history, in a way. It tears things down or replaces them. You can only find traces – or you have to go out to places like East Hampton. 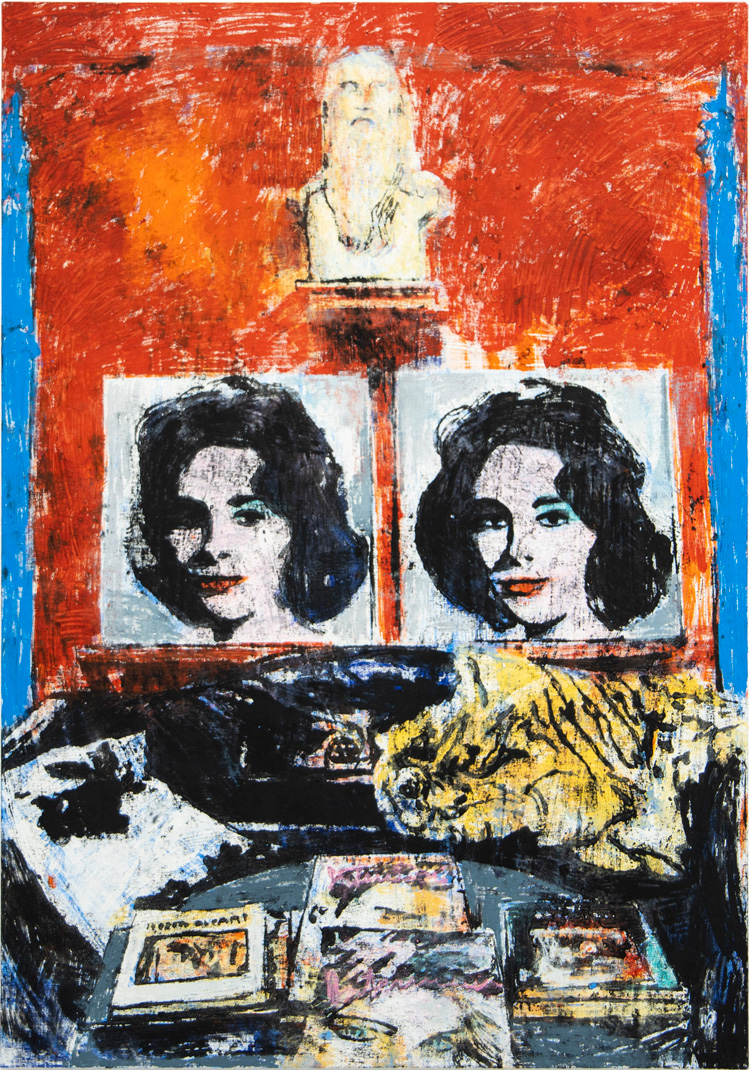 JL: Although all the paintings in the series are figurative and depict ostensibly similar subject matter, their tone and palette vary immensely. Your painting of Giorgio Morandi’s studio, for instance, has his hushed, earthy hues.

EP: It almost looks as if there are several of his paintings in here. Yes, I left it kind of muted and essential. Whereas with the Villa Nellcôte in Provence – where the Rolling Stones recorded Exile on Main Street, their total masterpiece – I based it on a black-and-white picture, so I made up the palette. That was the whole struggle of the show. Some of them are super-finished so that they’re almost photographic. I thought: “Why don’t we go the opposite direction?” 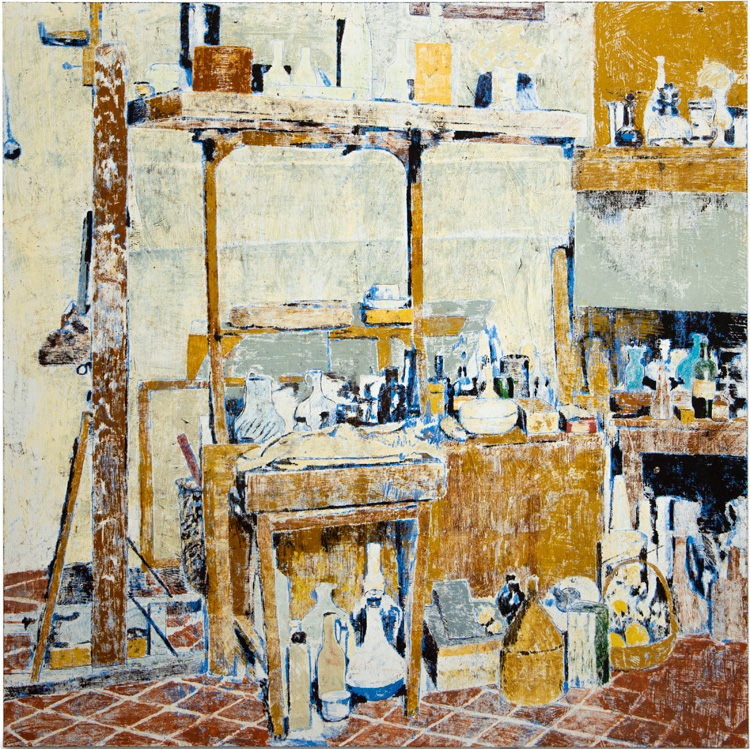 JL: In this exhibition, the majority of the spaces belonged to famous men, although the whole series takes in more interiors belonging to women. Was that a conscious decision?

EP: One thing the show is about is masculinity. With Casa Mollino, you have this amazing place where Mollino has created an apartment for life after death. And I love that freedom, that confidence. He was living at the time of Mies van der Rohe, Gio Ponti, all these huge, strict modernists. And yet he did what he wanted. He decorated rooms with butterflies.

I don’t know how, you could say, woke I am. According to my kids, I am embarrassingly lame. But these are all subjects where I love their art, their music, or certain aspects of their collections. I don’t plan to make a moral judgment. It’s interesting here that it’s largely men, because in another show I had Pauline de Rothschild and Diana Vreeland and many others besides. I don’t particularly put them in order.

JL: Why did you chose these paintings to hang together?

EP: I just chose what I thought were the best paintings. The bad ones are destroyed. If you don’t, you know that bad painting you didn’t like is the one that will show up at auction at four to five times the price in the future. Good paintings, people like to keep. And also, beyond that, being older you understand what’s really at stake. How do you to maintain the quality? How do you make a little scratch in the history, in the art? Turning 50, you begin to think about these things.

• Enoc Perez: The Cinematic Self is at Ben Brown Fine Arts, London, from 2 October to 22 November 2019 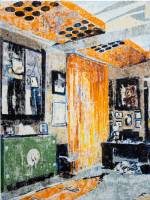 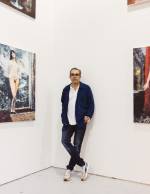