Mark Bradford: Through Darkest America by Truck and Tank

Mark Bradford: Through Darkest America by Truck and Tank

Very rarely does a show of new work by a contemporary artist deliver on its promise more fully than does American artist Mark Bradford’s current exhibition at White Cube Bermondsey.

Bradford employs ripped paper rather than paint to create huge and intricate “canvases” that use the urban sprawl of American cities and their circulatory systems of grids and highways as a springboard for exploring “the dynamics of social abstraction, where image is fused with context”.1 Reflecting the infinite variety of visual experience in the urban environment, these new works portray that environment as a breathing, pulsating organism that is evolving or mutating at an incalculable rate.

The show’s title – Through Darkest America by Truck and Tank – references a chapter in Dwight D Eisenhower’s 1967 memoir At Ease: Stories I Tell to Friends, in which the former president reflects on his time as a member of the transcontinental motor convoy of 1919 and in Germany during the second world war, both of which inspired his establishment of a nationwide highway system in the US in the 1950s. Bradford addresses this major turning point in America’s geographical, economic and social history with a kind of celebratory cynicism. One the one hand, the introduction of these major roads as part of a master plan for the layout of the country was to the detriment of local communities, many of which were literally torn apart by the new roads. On the other, the ideas that underpin America’s “greatness” are akin to, and dependent on, many of the fundamental characteristics and possibilities offered by a nationwide road system: size, speed, the possession of land, and the ability to travel to greener pastures in order to make something of oneself. Bradford’s monumental collages are a double-edged exploration – both pejorative and obsessive – of modern and postmodern America.

Bradford maintains this apparent ambivalence towards his country through a creative practice that, while not necessarily innovative, he has made his own, both technically and conceptually. Collage’s history is short but intense, and Bradford’s use of found materials such as posters and newsprint has its origins in Cubism: in the early 1910s, Pablo Picasso, Georges Braque and Juan Gris had likewise used found matter to play around with language and space, often with implied political and social commentary built in.2 At the same time, Bradford’s works in this show are reminiscent of Robert Rauschenberg’s mixed media pieces, made in the 1950s and 60s, that incorporated signage, billboards and other metropolitan detritus into fine art to indicate that the best way to represent urban experience is to make work from its material manifestations.

Bradford’s Riding the Cut Vein (2013) is a patchwork of shapes and materials resembling an aerial view of a vast conurbation. It is, as Bradford intends, an image both of and formed from its context. Seen at close range, this collage, as well as The Last Telegraph (2013), which recalls both the highway structure and the tangle of wires now symbolic of metropolitan connectivity, presents a richly layered surface that is built up and scratched away at, like dirt and paper on a billboard which, with enough weathering and neglect, become one homogeneous plane. At the same time, both pieces allude to the functional alienation that defines urban space, and to its intense visual stimulation. They are buzzing, screaming, spewing surfaces, a vomitorium of Rauschenberg assemblages and the beat poetry of Allen Ginsberg, whose epic poem Howl (1956) is brought to mind both through the cacophonic visual style and the intent to rail against uncontrolled social and cultural transformation:
“I saw the best minds of my generation destroyed by madness, starving hysterical naked … / angelheaded hipsters … / who chained themselves to subways for the endless ride from Battery to holy Bronx on benzedrine until the noise of wheels and children brought them down shuddering mouth-wracked and battered bleak of brain all drained of brilliance in the drear light of Zoo … / who barreled down the highways of the past journeying to each other’s hotrod-Golgotha jail-solitude watch or Birmingham jazz incarnation …”3

There’s a psychogeographic urge within Bradford’s pieces, being, as they are, maps of the mind, or of experience, rather than of real places. They set themselves aside from their precedents in the history of collage by virtue of their scale and of their combination of an additive and subtractive technique. In Dusty Knees (2013), we seem to be looking at three conflicting scenes: the hill shape formed by a person’s knee in profile, an actual hill as part of an epic landscape scene, and an aerial view of a gridded city. By ripping away at and building up the paper across the picture, Bradford creates an ambiguity of space that equates to an ambiguity of meaning.

Likewise, Constitution (2013) is a series of four canvases that show the meticulous way in which Bradford uses paper to create the impression of recession and relief on a flat surface, and features whole sections taken from the US constitution “written” in ripped paper. The visual result is a barely or intermittently legible version of the text, frustratingly inaccessible and with its historical and political importance diminished by all of the scratching and scraping. Where these layers intersect, they take on the palimpsest-like form of the rings of a tree: but a tree that has been cut down, pulped, flattened, printed on, pasted on, pasted over, scratched at and forgotten. This idea that a tree’s natural life is followed by a pop-cultural afterlife is an analogy for the general movement from nature to culture that characterises modernity. In developed areas, things don’t simply exist; they must learn to co-exist. This is a recurrent motif in the work Bradford is showing here, the ultimate example being the move from organically carved-out paths, roads and communities to the creation of a major concrete road infrastructure that facilitates cross-state commuting and goods transportation.

As with Ginsberg’s Howl, Bradford’s depiction of the US conceives of postmodern urban life as a free-for-all of expression, inevitably deactivating our ability to form conclusions from his representation of it. We become those “angelheaded hipsters … who chained themselves to subways for the endless ride from Battery to holy Bronx …” Bradford’s new works are modern monuments to America that illuminate the rage and excitement of progress coupled with the fear and melancholy brought by its immense impact on the individual.

References
1. Exhibition guide, np.
2. Academics have argued at length over the possible political content of Cubist collage, with little resolution to this day. Social historians of art, for instance Patricia Rubin, have postulated that newspapers were incorporated in these works with the deliberate intention on the part of the artists to comment on specific pre-first world war issues. Others, such as formalist-structuralist Rosalind Krauss, have famously regarded Cubist collage mainly on aesthetic terms, refusing to “read” them and instead focusing on their formal and abstract qualities. Bradford’s work may help us to retrospectively conceive of Cubist collage as a “fusion” of the two, with conceptual content informing and informed by visual experimentation.
3. Allen Ginsberg, Howl, lines 1, 3, 14 and 59. First published in 1956 by City Lights Books as part of Ginsberg’s collection of poetry Howl and Other Poems. Extract taken from http://www.poets.org/viewmedia.php/prmMID/15308. 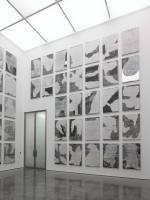 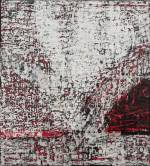