The Victoria and Albert Museum’s new policy for generating and catalysing satellite ventures outside London has taken off with a dramatic proposal to create a new building at Dundee, Scotland. The initiative was driven by Professor Georgina Follett, Vice-Principal of Dundee University in collaboration with the City’s Council in association with the V&A together with the city’s second University, Abertay, and has moved with exemplary pace to reach a further stage in fruition.

This has taken the form of an architectural competition, which from some 122 entries worldwide yielded a shortlist of six firms, all internationally credible. These were Delugan Meissl, of Vienna, Rex, of New York, Snohetta from Oslo, Steven Holl from New York, Sutherland Hussey from Edinburgh and Kengo Kuma and Associates from Tokyo. The latter had completed the City of Nagasaki Art Museum in 2005. Kuma’s scheme for Dundee’s waterfront follows their design for the Contemporary Arts Centre, Marseille, now under construction. They were adjudged winners by the eight-person jury (two of whom were UK architects) in November 2010, and this month they will be formally appointed as architects for the scheme, in association with Arup (UK) and three Scottish associated firms.

The short-listed schemes were widely varied, yet they all poeticised the estuary-side site in ways that exploited the superb waterfront position. However it seemed only that Kengo Kuma was able to create a public vision which was both ecological, even geologically-inspired, and yet embraced the potential of the axis linking the site to the city central area. The competition’s website recorded 27,000 hits from those interested. In his entry, Kuma took particular account of the heritage-based neighbouring item, the RSS Discovery vessel of Captain Scott, the Antarctic explorer permanently docked close to the site. Indeed the massing profile of Kuma’s design seemed to offer memory assimilations of iceberg form: but it was wholly welcoming to visitors. Landscape traces appear on the upper levels, over the extensive public space, which connects with the city access boulevard seamlessly and runs past the historic polar vessel into the architectonic concourse of the scheme itself.

Kuma designed his building to incorporate horizontally layered compound stone panels. These are cast complete with insulation and structural concrete cores, and comprise over 90% quartz, granite, marble and natural stone elements. Between the horizontal panels runs glazed fenestration, which conform seamlessly to the inherent grammar of the whole self-supporting structure. In addition, the panels will weather as readily as natural masonry, slowly and benignly, offering an indigenous quality to the new building. This is however a wholly 21st-century construct. It is possible that with the V&A’s help Dundee is acquiring a masterpiece of the new architecture, yet one which never jars with the existing fabric of the city. Even the somewhat predatory seagulls are fended off by various methods including decoys, and so are discouraged from exploring the facades as cliffs.

Dundee is a city of culture, that contains its fair share of home-based yet internationally known artists, authors and poets. It is also, in a smaller version of Glaswegian esteem, intensely proud of its identity. The building is also intended to become a showcase in global design, containing a design centre which will also capitalise on the presence at Dundee University of a leading UK College of Art and Design, familiar as Duncan of Jordanstone College, from which many leading designers and artists have emerged. In fact there exists in Dundee a wide range of practising, research and teaching talents, rated highly in Europe and beyond. Both Georgina Follett and the director of the V&A, Sir Mark Jones realised that the jury had to select a scheme of international quality, not a cloned metropolitan spin-off deemed right for the regions.

There will be a flow of exhibitions from the V&A’s Collection and showings in London, which will complement those of Dundee’s own excellent and now refurbished McManus City Art Gallery. Culturally and socially there are indeed subliminal qualities to the Dundonian character. Following the great jute industry of the 19th and 20th centuries that made Dundee fortunes, links with India (the raw material source) led to cross-population with Indian employees. They and their descendants who have remained have integrated in depth. Then there is an iconic comic industry – the publishers of the Beano (and many newspapers and journals and with associated electronic ventures) D.C.Thomson, continue to flourish widely across Britain, from their original base in the city. In many respects the City, and Spain’s Bilbao, which partly inspired the collaborative venture with their Frank Gehry Guggenheim art gallery, both share an optimism about the future which can clear up past depression, as is particularly evident with Bilbao’s economic growth.

For Dundee, a £5 million primer fund plus “significant” sums towards the capital cost, has already been pledged by the government, on a cross-party basis. This forms a relevant proportion of the total budget estimated earlier at some £45 million, of which government sources will further make a significant contribution. There will be some £15 million in addition from Lottery, EU and other public funds, and calculated totals of some £15 million from business and commercial sponsorship. Given the financial climate prevalent at present all this augurs well for such an enterprising collective and communal collaboration. Work is expected to start in the near future and to be completed well within the decade. As Moira Gemmill, the V&A director of projects and design has said, “it is absolutely critical such projects are delivered on time and within budget”.

There is emerging in this way a new model for satellite development by major Museums in the future. The latest news as regards the Guggenheim is that the city of Helsinki has commissioned the Solomon R. Guggenheim Foundation to explore the possibility of creating an art museum there. A feasibility study, to take a year, is already budgeted at a cost of £1.6 million. Richard Armstrong, New York director is quoted as saying “it is a very compelling opportunity to continue our investigations into the possibilities of global interchange”. The bid, if successful could lead to a 2017 opening. The likelihood is that an architect from Finland would be appointed in this case, where there is no shortage of talent. Such a development clearly indicates that Dundee and the V&A have chosen the right model, as first exemplified by the Guggenheim and the City of Bilbao, but with local variability. 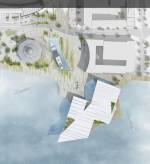