With Lascaux IV, which contains a state-of-the-art simulation that brings to life the famous Lascaux cave and its Palaeolithic paintings, Norwegian architects Snøhetta and UK design partner Casson Mann have created an uplifting and educational temple to a vanished civilization 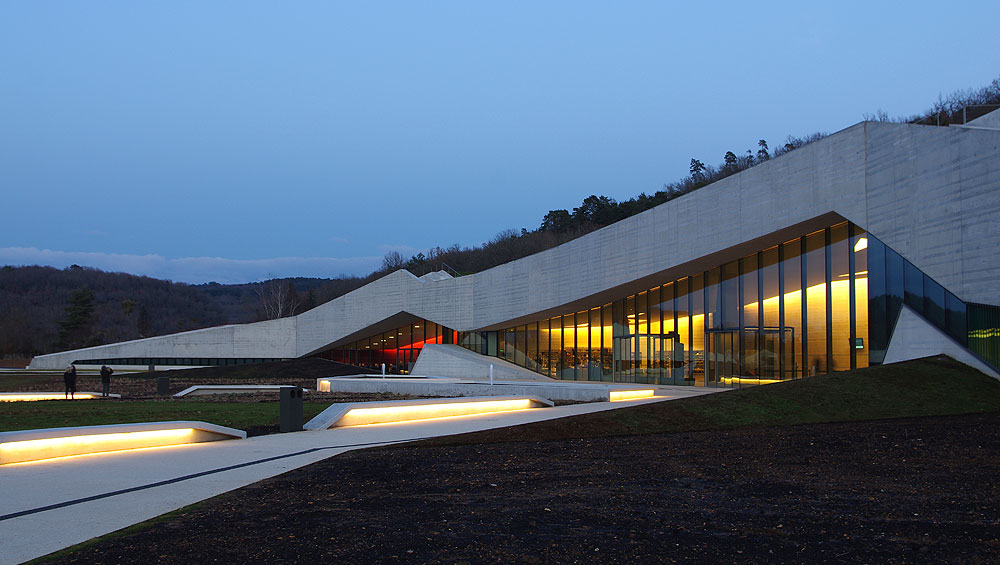 Low lying, its elongated concrete contours hunkering down beneath the ancient tree line, the new Lascaux IV: International Centre for Cave Art (Centre International d’Art Pariétal) forms an unlikely spectacle on the edge of the medieval town of Montignac, in France’s Dordogne region. It is a testament to architecture practice Snøhetta’s acute sensitivity to landscape that the structure glides into the hillside with more grace and self-effacement than you would expect of a monumental building of this scale or stark modernity.

The Palaeolithic paintings of the Caves of Lascaux – and others like them in France and southern Spain – are among the world’s great wonders. They provide evidence of a heightened consciousness, artistry and shared spirituality dating back 20 to 35,000 years. They are, if you like, the event horizon that separates Homo sapiens from its primitive Neanderthal cousin. But how do you rise to the challenge of designing a new visitor centre for this Unesco World Heritage site, capable of hosting up to 4,000 visitors a day, and get away with the fact that the cave you offer is not the real thing, but a replica?

Even taking into account the fact that few civilians have seen the original caves since 1963, when it was discovered that the warm breath of so many thousands of visitors was destroying the art, and that a simulated cave has provided the only mainstream contact with Lascaux’s Palaeolithic paintings since 1963 when Lascaux II opened, just 200 yards away from the original, it must have been both a thrilling and daunting prospect for the design team. “We were probably fairly terrified,’” admits Roger Mann, partner and creative director at Casson Mann, who approached Snøhetta to join forces for the design competition in 2012. “I can remember endless conversations about authenticity.”

But fate – or timing – ended up forcing a rather novel approach on the team. Having secured Snøhetta’s agreement for the competition bid, with less than two months before the deadline, Casson Mann was left high and dry while Snøhetta’s entire Norway office took their national summer holiday (throughout July and August). This meant Casson Mann had to step in and lead the design thinking, devoting that summer to finding the right narrative for the visitor experience. When it presented its requirements to Snøhetta, the Norwegians were – to their enormous credit - happy to oblige with a radical building that celebrates both content and context through form, programming and materials; it is almost unheard of for exhibition or interior designers to dictate the programme to their architects.

There were two vital elements that Casson Mann wanted to ensure for visitors. It wanted to incorporate the best elements of Lascaux II: namely, to create a sense of connection with that historic landscape, and the story of the cave’s discovery, coupled with a physically authentic cave interior (luckily, it knew it would be working with a far superior replica, since the caves were recently comprehensively mapped using the latest 3D digital scanning technology). The other requirement was a sense of intimacy, which Mann knew would be threatened by the large numbers of visitors. He says: “The only way to do it was to put people into small groups of no more than 30 and pulse them through, and when they’re in there, keep them in the group and dim the lights either side of the group, so you feel as if you’re in a pool of light with your guide; that’s about as intimate as it’s going to get.”

And this is indeed what happens: after entering the building’s light-filled lobby, we meet our guide and head into a lift and up on top of the building, to an open, “belvedere” platform where we see the landscape and learn about the prehistoric climate, flora and fauna. We go back inside briefly to view a short film about the cave’s prehistoric setting and then its discovery – it was brought to light in 1940 by four local teenagers out walking, when their dog chased a rabbit down the hole which led to the caves - before being led back outdoors and down a high-walled, rugged walkway that descends below ground level to the entrance of the replica. Here, in a dark, utterly cave-like space, we experience this astonishing art, moving through the sections, each with its own distinctive organic architecture, as the original, awe-struck teenagers must have.

Although we know that we are in a simulation, it is reproduced with such sensitivity and accuracy, with close control over temperature, acoustics, lighting and humidity, that it is easy to allow yourself to fall under a kind of spell, wondering at the skill of the original artists, the meaning of their very specific renderings of only three kinds of animal – horse, aurochs (a larger form of wild cattle) and stag. As the guide tells us, there are many more questions than answers in this art: if it was intended as a kind of talisman to bring luck while hunting, why does it not feature any of the animals that Homo sapiens were known to eat at this time? Why is there a proliferation of mysterious geometric symbols and dots (which are found in Palaeolithic art all over the world)? The enduring mystery of their provenance, coupled with the scale, quality and quantity of the paintings and engravings – 3,500 pictures of horses alone – is breathtaking.

As we exit the cave, we find ourselves in the open air again, in a high- walled space, much like a natural gulley – a “cave garden” – designed to allow a pause for “contemplation and recovery”, as Snohetta co-founder Kjetil Thorsen says. And then we are back in the semi-dark, in the “Atelier de Lascaux”, a high-ceilinged gallery as dramatic, in its own contemporary way, as the caves themselves: here, cross-sections of the cave are hung from thin metal poles which simulate the pale stalactites of the original. Now, we have time to look and learn more about the cave structure and how the paintings were made, assisted by our own “Companion de visite” (CdV) tablet.

This Atelier leads into the main spine of the building – a vast, top-lit hallway, which evokes the atmosphere of a temple more than a museum. Three further exhibition spaces lie to our right: a film “theatre”, exploring the theories and controversies around Palaeolithic art; a cinema where a 3D film ponders the links between us and our prehistoric ancestors; and, finally, a gallery that looks at how prehistoric paintings may have influenced contemporary art.

At every stage, the building facilitates and enhances the experience, even before you enter its glass front doors. It is shaped like a lateral cut in the landscape, and thoughtfully angled so that it tapers away from town, never looming over the adjacent dwellings and somehow subservient to the thickly forested hillside. Surrounding this public-facing facade is a wide skirt of newly seeded meadow inset with shallow ponds, so that, at this point in its early evolution, it resembles a kind of slightly boggy primordial soup. Car and coach parking is, thoughtfully, parcelled out around the town and landscape, to keep the traffic infrastructure sufficient for peak summer traffic, but largely out of sight.

The building itself appears to lean into the hill, with two long, slender sections split apart by a deep, top-lit fissure, which forms the aforementioned central spine. Its orientation follows the sun, east to west, so that this central atrium maximises the drama of sunlight and shadow play, caused by the slabs and beams of the supporting structure. Furthermore, a wide, concrete stairway follows the roofline so that anyone can walk over the building and on to the hillside, enjoying the views and nature, at any time – a delightful feature that echoes Snøhetta’s Oslo opera house, with its climbable, inhabitable roofline; you can’t help but feel affection for a building that lets you walk all over it.

The facade, while striking in its irregular, faceted profile, is north facing so that there is no glare from or into the extensive glass elevation. Instead, it offers transparency into the building, and great vistas from within it, shaded by the protruding lip of the concrete roof, which extends, like the mouth of a cave, to offer protection. The simplicity of this building’s materials creates a perfect counterpoint to the intricacy and organic beauty of the cave art it celebrates. The internal and external walls are made from the same architectural concrete, which has a delicate striated pattern throughout, while the floor is a polished concrete of the same colour.

There are many reasons why this building works so well, according to Thorsen. First, he says: “The building is not trying to compete with the cave in any way. It’s not like a cave. It doesn’t have any organic shapes. It has hard corners.” Second, it is dedicated to the logic of the visitor journey. “This isn’t a museum typology,” he says. “We move from outside to inside, to outside to inside … there’s a sequence of places, and it doesn’t have a central plaza. It doesn’t have a central point. It’s very monolithic.”

Thirdly, and perhaps most importantly, is the thread of honesty that underpins this journey. The only time you are asked to suspend disbelief is when you enter the cave. At this point, the building and interpretation are united in conjuring that reality. As Thorsen says: “When you are in the cave, there and then, you get as close as possible to the emotional reality. But when (visitors) come back out, you want to remind them that this was not reality.” Then, as soon as you enter the Atelier, you have the dissection of that experience, albeit in a highly theatrical and evocative space, complete with jagged, cave-like apertures in the roof.

Ultimately, for both Thorsen and Mann, the whole project is informed by the poetic presence – or absence – of the real thing, just a half a mile away. The resonance set up by that adjacency has been nicely evoked by Apollo magazine writer Robert Hewison, who concluded after his own tour of Lascaux IV: “Might absence be more powerful than a spurious presence?” Mann agrees: “Part of the success of the facsimile is knowing that this precious thing that exists in the world is there, it’s close by.”

But Thorsen hopes that what they have also done, through the enormous care and artistry deployed on and within the building, is create a new artefact that has its own integrity. Rather than just copy the original, he says: “There is an alternative: to relate to the artefacts not of the existing cave but the cave we are visiting right now. Because we have been in a wonderful art piece, right?” 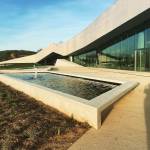 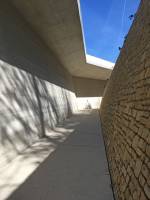 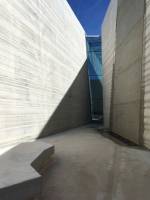 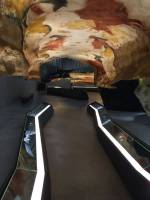 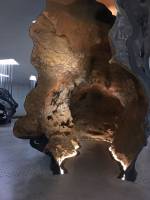 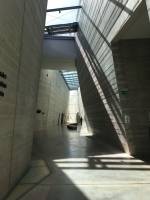