I don’t want to impose any point of view, any perspective, because I’m also quite fascinated by how others view my work. An outsider’s glance shows me what I don’t already know, what I haven’t as yet seen. It’s a provocative experience.1

In London, Mimmo Paladino’s show, Black and White, at the Waddington Galleries earlier this year, and his spectacular large painting, at the Royal Academy Summer Exhibition, reveal his continued mastery of the evocative and mysterious language of painting. Paladino is working at the height of his powers, on a grand scale, and to great effect. His work is instantly recognisable, drawing on the deep recesses of the memory and myth of Italy and years of dedicated work as an artist. Paladino uses numerous aspects cultural history, especially Italian history. He works in painting, printmaking and sculpture where drawing underpins all of his work.

Born in Benevento in Southern Italy in 1948, Mimmo Paladino grew up mostly in Naples. He came into prominence with the artists known as the “Transavantguardia”, a group defined by Achille Bonita Oliva in 1979, which included seven young Italian painters: Sandro Chia, Francesco Clemente, Enzo Cucchi and Mimmo Paladino, along with Nicola De Maria, Luigi Ontani and Ernesto Tatafiori. “Their subject-matter, ranging from the classical to the scatological, seemed unimaginably eclectic and appeared to offer rich possibilities for a continued life of art, which shortly before had seemed to be talking itself into a self-reverential corner”.2

Italian art in the 1970s, had been dominated by the non-painters of Arte Povera. Arte Povera chose installations of ready-mades, and found materials; the artists rejected all evidence of the artist’s touch or signature, deemed as a form of devalued subjectivity. Artists of the transavantguardia, on the other hand, embraced painting and emphasised the idiosyncratic. If Arte Povera belonged to the avant-garde, the transavantguardia was revivalist, choosing painting, the medium which most epitomised tradition in art. In Italy the choice was invariably informed by the glorious history of Italian painting from the medieval fresco painting to the triumph of the Italian Renaissance. Achille Bonita Oliva, who coined the term, organised the first exhibition of the group in Sicily in 1979. He published an article on the movement the same year in Flash Art, and a book in 1980. The new art movement quickly commanded an important position in the international arena, dominating the Venice Biennale of 1980. Oliva described the transavantguardia, as being unlike the notion of modernist art which saw its development as being from traditional to the new. The transavantguardia opted, “to pick and choose from [past styles] in the conviction that, in a society in transition toward an undefinable end, the only option is that offered by a nomadic and transitory mentality”3. Mimmo Paladino described it as, “crossing the various territories of art, both in a geographical and temporal sense, and with a maximum technical and creative freedom. So if, on the one hand, I feel close to Giotto and Piero della Francesca, on the other I pay attention to Byzantine and Russian icons…I believe that the superficial glance is very much in keeping with the fast moving times we live in”.4

Critics of the revival of painting, or perhaps the particular form of its manifestation, in both Italy and Germany in the 1980s, condemned the new work as essentially retrograde, as quoting the fascist styles of the 1930s, or glorifying Italy’s notoriously decadent Roman past. In 1981, the exhibition curated by Germano Celant at the Pompidou Centre in Paris: Italian Identity: Art in Italy since 1939, infuriated the transavantguardia by all but excluding them. Only one artist of the group was included (De Maria). Celant continued to champion Arte Povera, as well as minimalist performance and conceptual art. As late as 1989 Celant had accepted a number of artists (Cucchi, Clemente, Kiefer) but still regarded the new painting as nationalistic and apolitical and characterised instead by a personal vision in the guise of ‘beautiful painting’ that would seduce the viewer into believing it was a superior or ‘real’ form of art. It was in Celant’s view, nostalgic, superficial and unacceptably showy. The international/regional debate took place around the world at this time. According to Oliva, Italian artists had denied their national identity for 35 years. With the transavantguardia, “The idea of investigating the Italian-ness of Italian art, long discredited by its association with fascist cultural politics, was rehabilitated as the birthright of young painters. 5

Irving Sandler identifies the dominant issues in the development of the movement in the 1980s.

Anticlassical classicism had long been a practice in Italian art; in the twentieth century, it was most commonly identified with de Chirico…Like de Chirico the transavantguardia cleverly put references to “Italianness” in figurative quotation marks. Nonetheless, the effect was peculiarly Italian. As Chia summed up, the special role of the artist was “to perceive what is given as a cultural tradition [in an] unconventional, outrageous way. It is his task and also his social duty… to start a new creation from an existing creation”.6

Norman Rosenthal has chronicled the work of Mimmo Paladino and the artists of the transavantguardia from the early 1980s. The New Spirit in Painting was organised in 1981, and the Italian Art in the Twentieth Century: Painting and Sculpture, 1900–1988, was organised by him at the Royal Academy, London in 1989, where he wrote the catalogue Introduction and the essay on the most recent Italian painting. Rosenthal wrote the catalogue essay for Paladino’s London exhibition at Waddington Galleries, in 1984 and also for this year’s exhibition, Mimmo Paladino: Black and White. In his Italian Art in the Twentieth Century, essay, Rosenthal described Paladino’s thus:

Paladino’s eclecticism is characteristic of the transavantguardia generation. For him, art evokes secrets silently and functions in a ritualistic way; the artist alone officiates and we are merely privileged observers. His paintings and sculpture, and his remarkable drawings, are full of the imagery of rituals; priests and witch doctors engage in precisely those subterranean dramas that exist in dreams and myths and which in a post-Freudian age cannot be satisfactorily explained. His works are not in any sense programmatic. The ceremonial banquets which are a recurring theme in his work have a quality that evokes the notion of death. They are literally ‘natura morta’, they take one to a new reality in another world. The figures are masked but the artist has little wish to divulge their meaning.7

Paladino describes his work in this way,

The figures in my paintings, the animals, the masks, the theme of death – I do not want to explain or analyse them. They are the roots out of which the picture develops, but not its content. That is an entirely different area which also cannot be researched with the methods of art criticism. These things are not decisive in the dispute between art and the world. De Chirico never spoke philosophically or psychoanalytically about his work. He always said, “I use colour, the place, the painting of the Cinquecento, the light, the surface”. This is how I wish to hear painters talk about their work, not because I believe art is a technical problem but because the artist always plays his game of hiding what might be evident.8

Paladino is a master engraver and printmaker. His graphic work (an etching is included in the RA Summer Show) makes him one of the most impressive printmakers working today. The scale of the recent paintings, such as, Un Treno per Dulcinea, in the RA Summer Exhibition is a masterpiece of scale and space. It conjures a range of references, art historically Etruscan sculpture, Picasso, de Chirico, Joseph Beuys. The wide range of references is intriguing, The technical command of the space, and the confidence with which he applies blocks of colour, against a mostly black canvas, and bold and resplendant use of gold leaf, owes something to the great number of large-scale drawings and prints he has made. Emancipated from the realm of illustration, or using diaristic entry, Paladino commands a large space with his outstanding draughtsmanship. Drawing and the graphic works are fundamental to his painting. The relationship between words and images is a central issue in many of his graphic works. The woodcuts and lino prints interact seamlessly with the paintings.

The grand yet sombre paintings on show in London are large in scale, using areas of black and gold leaf. References are made, to southern Italy where he continues to live and work, and to the layers of history, specifically Etruscan and Roman past. Benevento is steeped in Roman history, with one of the best preserved Roman arches in Italy dedicated to the Emperor Trajan, as well as one of the largest Roman theatres in existence, built by Hadrian and Caracalla. Paladino acknowledges the cultural strands that intertwine in this area of the south, as Rosenthal has aptly observed, “The Etruscan world flourished simultaneously with the highest period of Greek Mediterranean culture. From Greece the centre of that culture was to move gradually to Italy and over the centuries cultures built themselves on top of others with dizzying density; Christian Rome on top of Pagan Rome, the Goths, Vandals, Lombards, successively on top of Ancient Rome, reducing it through wars often to village status, the Normans from the north of Europe meeting up with Byzantine and even Islamic cultures, traces of which can indeed be found in Benevento in the twelfth century in cloisters of the Church of Santa Sofia; the battles of Guelphs and Ghibelines, the Renaissance in all its glory and seemingly endless histories down to the disastrous vainglories of Fascism”.9

The rejection of the transavantguardia in the 1980s by staunch modernists is in the light of the quality and variety of individual artists, somewhat dated. It can now, be viewed, as an inevitable reaction to the solipsistic conceptual art that had come to dominate the art scene at the time. The technical invention and originality in Mimmo Paladino’s work puts him in a unique place in terms of his significance and importance. Above all else, the range of his work, the elegant visual language and the metaphysical content guarantees him a worthy position of one of Italy’s finest living artists. 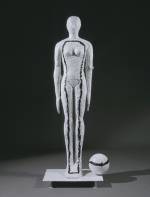